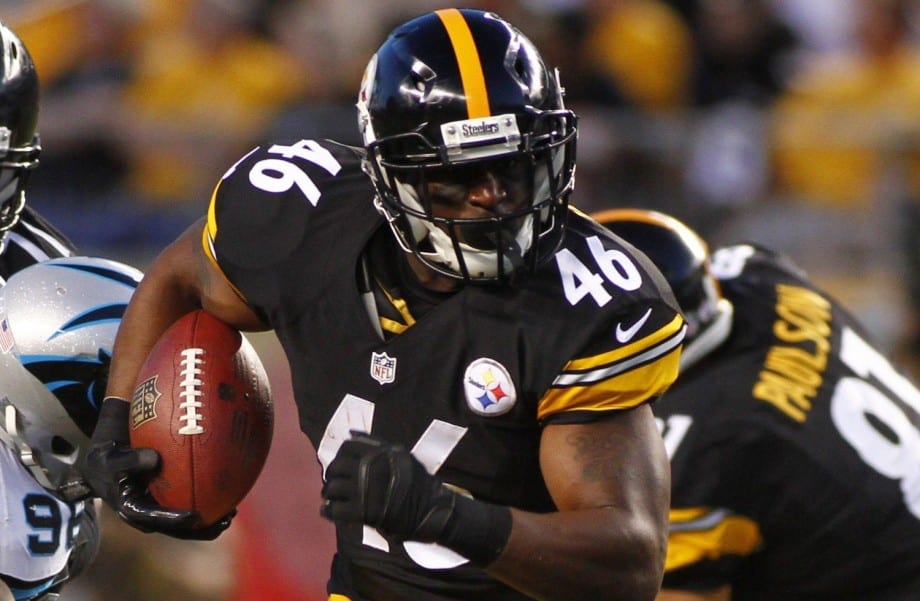 Or his receiving stats for that matter.

If they knew, they likely wouldn’t think much of his snaps played on offense as a fullback or a tight end.

123 snaps on offense (compared to 769 for starting quarterback Ben Roethlisberger).

It’s such a small amount that some wouldn’t notice he’s even on the field.

What fans would find impressive, and likely would make them take notice, are the glowing remarks Johnson receives from those whose opinion matters – his teammates and coaches.

“He might be overlooked by some, but not in this locker room,” Pittsburgh offensive lineman Ramon Foster told the Associated Press. “He’s a key contributor to our offense, and he can do a lot of different things.”

His ability to adapt to different positions is a mirror of Johnson’s attitude—willing to do anything to help his team and also to get the opportunity to play.

When he first went to West Virginia University, he was recruited as a receiver by then-head coach Rich Rodriguez.

After Johnson’s freshman year, though, Rodriguez bolted for the head coaching job at the University of Michigan and new West Virginia head coach Bill Stewart had different plans for Johnson.

He adjusted, helping the Mountaineers to three straight 9-4 seasons after the switch, a Big East title, two runner-up finishes in the conference and three bowl game appearances, winning one.

He was tested again after his senior season when he wasn’t invited to the 2011 NFL Combine.

And once again, he adapted.

He trained, stayed focused, kept in shape and worked three jobs with the hope of getting another chance.

That opportunity came the following season when he was invited to West Virginia’s Pro Day where NFL scouts were in attendance.

His workout that day was so impressive that the Steelers signed him.

“It’s unheard of for guys to come back and do their Pro Days,” he told Sports Spectrum. “It was tough… A lot of hard work that went into it.”

But his self-driven nature, along with his family history of hard work and never giving up, helped motivate him to stay focused on making it to the NFL.

When asked what was the key to staying motivated, Johnson told Sports Spectrum, “A strong work ethic that’s been instilled since I was young…and not being selfish.”

He also credited his mom, Wilma Gilmore, a single parent, for teaching him his work ethic, and he singled out his wife, Jessica (who he just celebrated his one-year wedding anniversary with), for supporting him while he was trying to get in the NFL.

Those family memories, and the memories of having to overcome obstacles, have helped drive him to succeed.

“I like to say there’s always someone who’s bigger, faster, stronger, and wants to come in and take my spot,” Johnson told Sports Spectrum when asked what drives him. “You never know if that person is outworking you somewhere. You never know when your last play on the field is going to be, so you have to play like every play is the last one. So that’s something I take to heart, because I know this opportunity I have of playing this NFL game is not for long, and I want to make the most of it.”

Hurdles still remained after signing with Pittsburgh, though.

The Steelers switched Johnson to another position after he made the team, this time to fullback where he adapted yet again and earned mid-season NFL All-Rookie honors.

This season, two years later, he is being been used at tight end as well as fullback, the dual role earning him praise because of his ability to adapt and his willingness to be used wherever the team needs him.

“I’m definitely not an I guy, I’ve always been a team-first person,” Johnson told Sports Spectrum. “I come to work every day excited, knowing that I can do my part to help this team win.”

“He can run the ball,” Pittsburgh star running back Le’Veon Bell told the Associated Press when asked about Johnson. “Obviously, he can block, and he can catch passes. So, he’s very versatile, and all his hard work in practice obviously carries over into the game.”

“One of his best traits is his versatility,” Pittsburgh Steelers’ Offensive Coordinator Todd Haley told ESPN.com’s Scott Brown. “He’s got vision and the ability to run the football, especially between the tackles.”

For someone who is barely on the field in comparison to others who are routinely in the limelight, that says a lot about the impact Johnson makes despite his productivity not being visible in a box score.

“People can talk about the running game being about the front five, but it’s just as much about (tight ends Matt) Spaeth, (Michael) Palmer, Heath (Miller) and Will opening up holes on the outside, getting to the second level and getting the linebackers,” Roethlisberger told the Associated Press. “They’re just as much to be praised as the line.”

“It’s good to hear other players saying we’re heading in the direction we’re headed because of the run game,” Johnson told Sports Spectrum. “That’s what keeps me going (what guys say)…I play for my teammates, too.”

When asked what he would share with other players who have hit roadblocks to their dreams, he told Sports Spectrum, “Prepare every day….because you never know what your role’s going to be.”

The ups and downs and overcoming obstacles have been a part of Johnson’s road to the NFL, just like other players.

For Johnson, though, the hurdles haven’t just made him stronger as a player and a person, but they have also helped make him stronger in his faith in Christ.

“My faith and my personal relationship with God has definitely gone to a different level,” reflects Johnson. “I have a lot on my plate, with all the temptations that come with my profession, keeping a steady relationship with the Lord is key.”