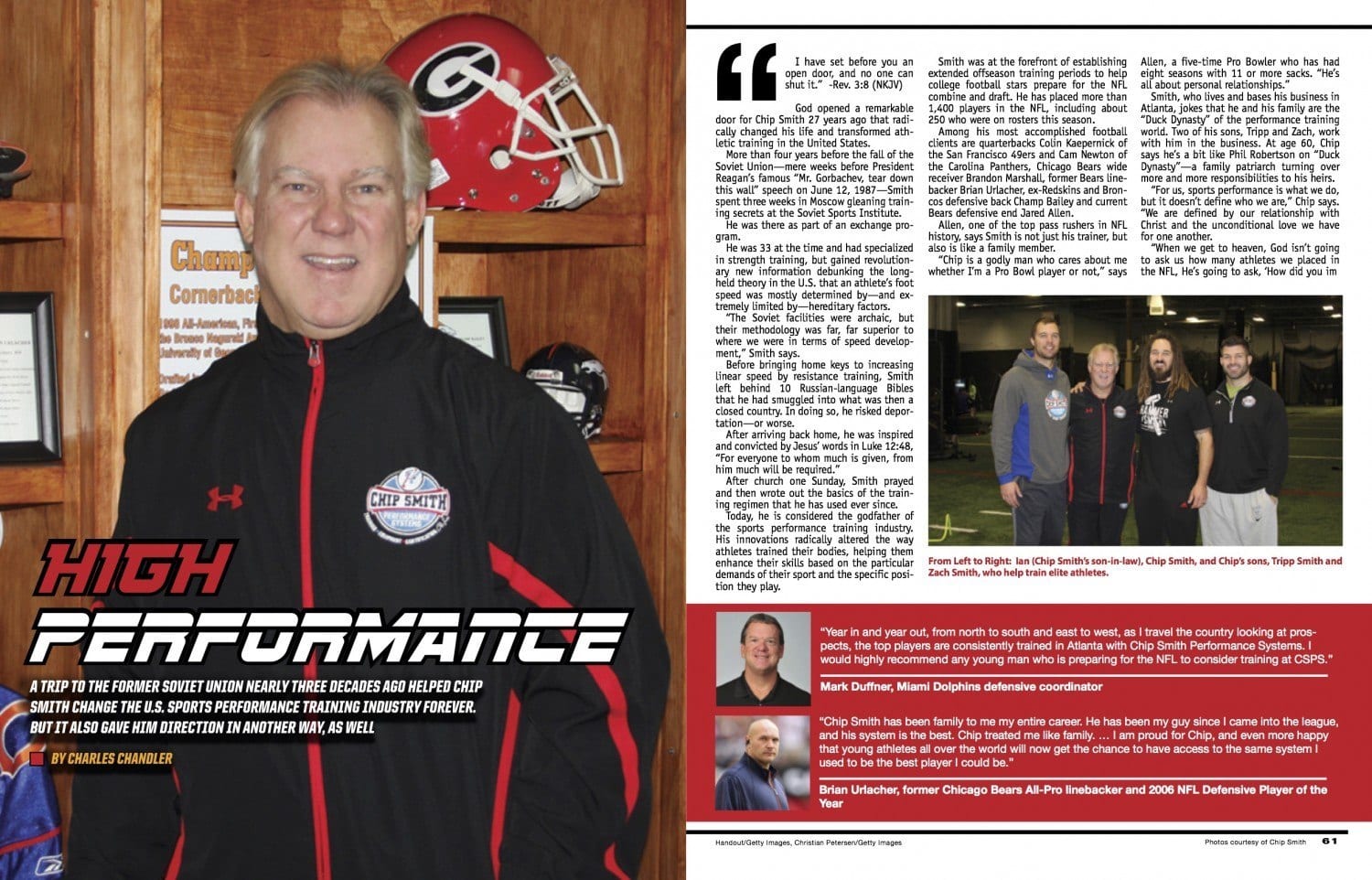 God opened a remarkable door for Chip Smith 27 years ago that radically changed his life and transformed athletic training in the United States.

More than four years before the fall of the Soviet Union—mere weeks before President Reagan’s famous “Mr. Gorbachev, tear down this wall” speech on June 12, 1987—Smith spent three weeks in Moscow gleaning training secrets at the Soviet Sports Institute.

He was there as part of an exchange program.

He was 33 at the time and had specialized in strength training, but gained revolutionary new information debunking the long-held theory in the U.S. that an athlete’s foot speed was mostly determined by—and extremely limited by—hereditary factors.

“The Soviet facilities were archaic, but their methodology was far, far superior to where we were in terms of speed development,” Smith says.

Before bringing home keys to increasing linear speed by resistance training, Smith left behind 10 Russian-language Bibles that he had smuggled into what was then a closed country. In doing so, he risked deportation—or worse.

After arriving back home, he was inspired and convicted by Jesus’ words in Luke 12:48, “For everyone to whom much is given, from him much will be required.”

After church one Sunday, Smith prayed and then wrote out the basics of the training regimen that he has used ever since.

Today, he is considered the godfather of the sports performance training industry. His innovations radically altered the way athletes trained their bodies, helping them enhance their skills based on the particular demands of their sport and the specific position they play.

Smith was at the forefront of establishing extended offseason training periods to help college football stars prepare for the NFL combine and draft. He has placed more than 1,400 players in the NFL, including about 250 who were on rosters this season.

Allen, one of the top pass rushers in NFL history, says Smith is not just his trainer, but also is like a family member.

“Chip is a godly man who cares about me whether I’m a Pro Bowl player or not,” says Allen, a five-time Pro Bowler who has had eight seasons with 11 or more sacks. “He’s all about personal relationships.”

Smith, who lives and bases his business in Atlanta, jokes that he and his family are the “Duck Dynasty” of the performance training world. Two of his sons, Tripp and Zach, work with him in the business. At age 60, Chip says he’s a bit like Phil Robertson on “Duck Dynasty”—a family patriarch turning over more and more responsibilities to his heirs.

“For us, sports performance is what we do, but it doesn’t define who we are,” Chip says. “We are defined by our relationship with Christ and the unconditional love we have for one another.

“When we get to heaven, God isn’t going to ask us how many athletes we placed in the NFL, He’s going to ask, ‘How did you impact my Kingdom with the tools that I gave you?’” 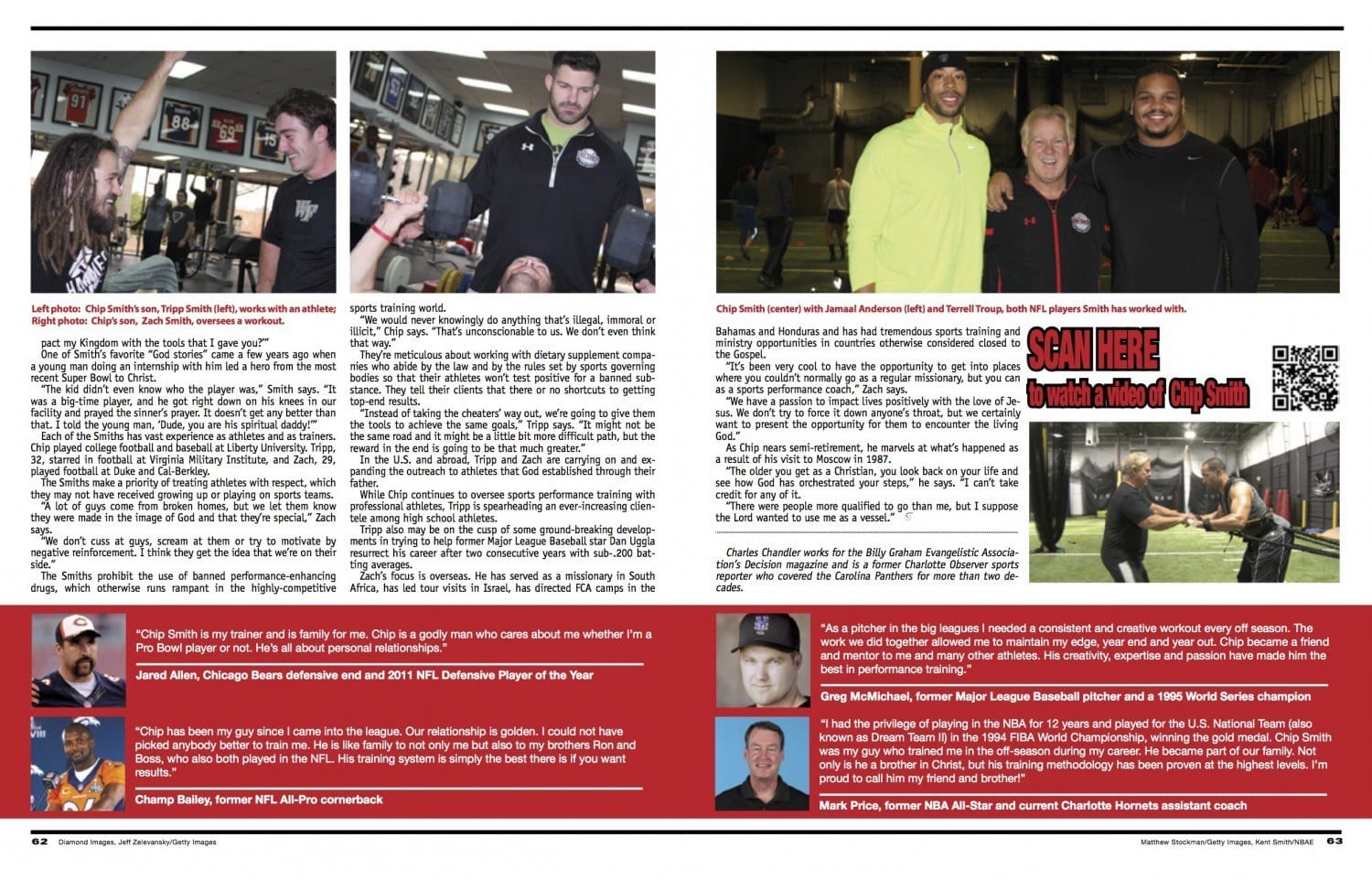 One of Smith’s favorite “God stories” came a few years ago when a young man doing an internship with him led a hero from the most recent Super Bowl to Christ.

“The kid didn’t even know who the player was,” Smith says. “It was a big-time player, and he got right down on his knees in our facility and prayed the sinner’s prayer. It doesn’t get any better than that. I told the young man, ‘Dude, you are his spiritual daddy!’”

Each of the Smiths has vast experience as athletes and as trainers. Chip played college football and baseball at Liberty University. Tripp, 32, starred in football at Virginia Military Institute, and Zach, 29, played football at Duke and Cal-Berkley.

The Smiths make a priority of treating athletes with respect, which they may not have received growing up or playing on sports teams.

“A lot of guys come from broken homes, but we let them know they were made in the image of God and that they’re special,” Zach says.

“We don’t cuss at guys, scream at them or try to motivate by negative reinforcement. I think they get the idea that we’re on their side.”

The Smiths prohibit the use of banned performance-enhancing drugs, which otherwise runs rampant in the highly-competitive sports training world.

“We would never knowingly do anything that’s illegal, immoral or illicit,” Chip says. “That’s unconscionable to us. We don’t even think that way.”

They’re meticulous about working with dietary supplement companies who abide by the law and by the rules set by sports governing bodies so that their athletes won’t test positive for a banned substance. They tell their clients that there or no shortcuts to getting top-end results.

“Instead of taking the cheaters’ way out, we’re going to give them the tools to achieve the same goals,” Tripp says. “It might not be the same road and it might be a little bit more difficult path, but the reward in the end is going to be that much greater.”

In the U.S. and abroad, Tripp and Zach are carrying on and expanding the outreach to athletes that God established through their father.

Tripp also may be on the cusp of some ground-breaking developments in trying to help former Major League Baseball star Dan Uggla resurrect his career after two consecutive years with sub-.200 batting averages.

Zach’s focus is overseas. He has served as a missionary in South Africa, has led tour visits in Israel, has directed FCA camps in the Bahamas and Honduras and has had tremendous sports training and ministry opportunities in countries otherwise considered closed to the Gospel.

“It’s been very cool to have the opportunity to get into places where you couldn’t normally go as a regular missionary, but you can as a sports performance coach,” Zach says.

“We have a passion to impact lives positively with the love of Jesus. We don’t try to force it down anyone’s throat, but we certainly want to present the opportunity for them to encounter the living God.”

As Chip nears semi-retirement, he marvels at what’s happened as a result of his visit to Moscow in 1987.

“The older you get as a Christian, you look back on your life and see how God has orchestrated your steps,” he says. “I can’t take credit for any of it.

“There were people more qualified to go than me, but I suppose the Lord wanted to use me as a vessel.”

Charles Chandler works for the Billy Graham Evangelistic Association’s Decision magazine and is a former Charlotte Observer sports reporter who covered the Carolina Panthers for more than two decades.