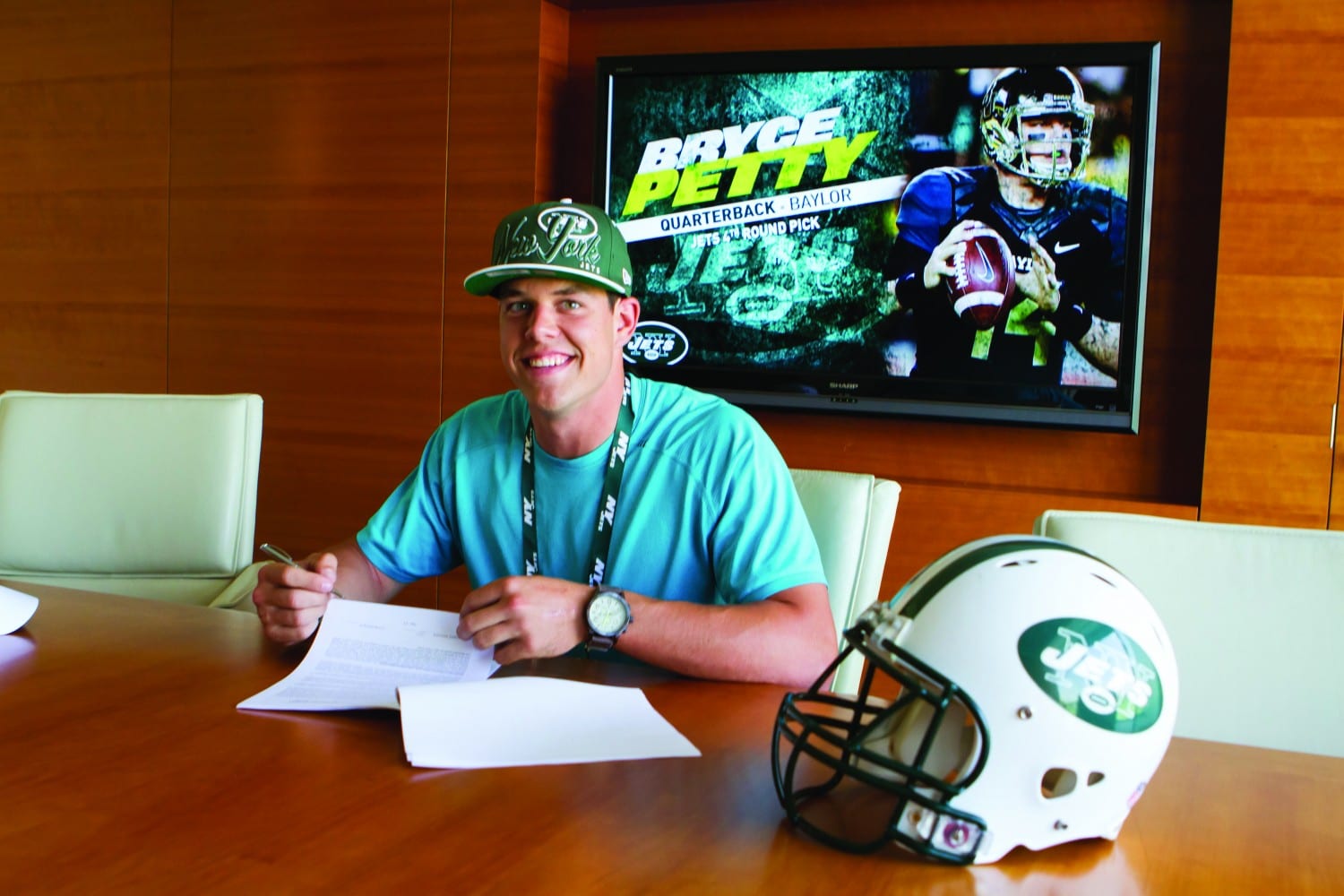 Former Baylor quarterback Bryce Petty entered the 2014 season as the reigning Big 12 Player of the Year, leader of the highly ranked Bears football team, on the Heisman watch list and the finalist for many prestigious individual awards.

He won none of the national honors he was nominated for, missed a game because of injury and saw his greatest passing day and final college game with Baylor swallowed up with a last-second, nationally televised, 42-41 Cotton Bowl loss to Michigan State.

But Petty found out something more important in his final college, star-crossed year, at Baylor, something that he will be taking to the NFL this year as he begins his professional career: how to find yourself in the center of God’s will.

Less than a week after his disappointing loss in the Cotton Bowl, Petty received his highest, senior-year honor in Dallas, winning the prestigious national Bobby Bowden Award, presented by the Fellowship of Christian Athletes and given to a senior who exhibits character on and off the field.

“This is a great award, but this year had so many expectations before the year started,” Petty says. “I wanted to win a national title, but it did not happen in the way I wanted.”

Bowden, the former Florida State coach who was in Dallas to present Petty with his national award, said the talented Baylor player has figured out what it means to have true success in life.

“Nobody has a better chance to be a role model for young kids than an athlete,” Bowden says. “And Bryce Petty is a shining example of that in all of football.” 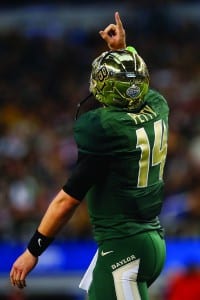 Blessed with NFL-like size, ability and arm strength, Petty was taken with the fourth pick of the fourth round (103rd overall) of the NFL draft by the New York Jets.

He said growing up watching bold Christian NFL quarterbacks like Kurt Warner and Tim Tebow helped prepare him for his new professional life.

“It’s easy to hide (your faith) to make everybody happy,” Petty says. “The people who are bold about their faith are lights in a dark world. If I get a chance to do that (NFL), that’s what I’m going to do, be bold. It’s going to be an honor and blessing to do it.”

After waiting more than 1,700 days from high school to be a starter, Petty played starting quarterback in 2013 for the first time in his college career, and engineered amazing passing statistics with 4,200 yards, 32 touchdowns and only three interceptions. It was the most successful ratio in the nation and led Baylor to their first-ever conference title.

His and most of the national media’s expectations for 2014 were similar to 2013, and while he led Baylor to another conference title, passed for 3,855 yards, 29 touchdowns and only had seven interceptions in one less game, Petty found God had other plans for his life and his spiritual maturity last year.

“I didn’t want to be a finalist for awards (last year), I wanted to win awards, but I’ve learned that God has a plan for each one of us,” Petty says. “I have learned that we are His masterpieces, created in His image much like Picasso creates a picture.

“You don’t have to have football to have a platform; you just have to let God use you. He has a purpose for every win and loss. You don’t ever want to differ from God’s plan, only trust in the plan.”

A broken bone in his back, in the first game of 2014 season, cost him an entire game and his chances to compete for the Heisman Trophy and many of the individual awards he was nominated for last season. His performances on the field were not up to the level of 2013, but his maturity and his spiritual journey was off the charts.

“This year I had a lot of expectations which were different from reality,” Petty says. “It’s always in God’s hands, the moment you think you have it in control, He steps in and says, ‘Nope. This is my deal.’ It was a great learning experience for me, the ups and downs, living with injuries. It’s easier to say, but harder to do. 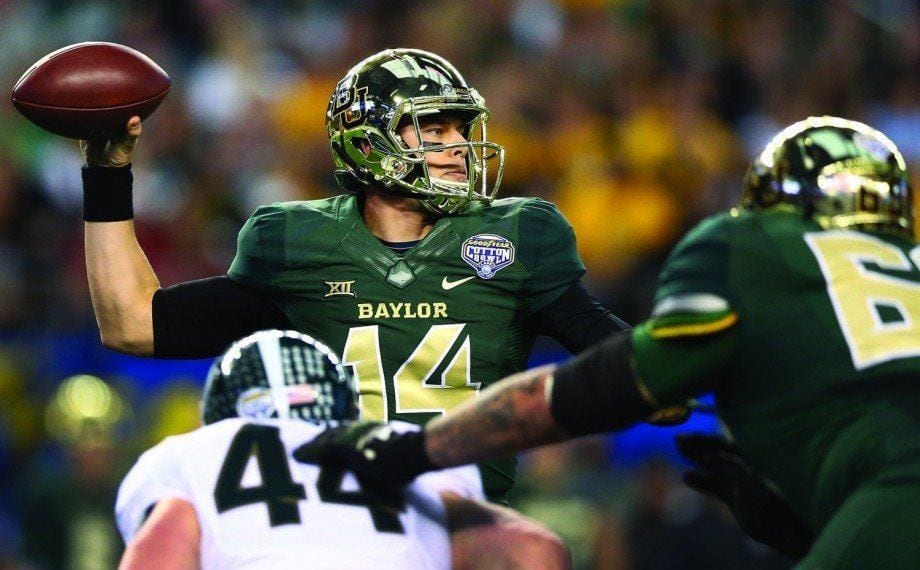 “You always want things you want, but it’s always about His plan and what He has for you.”

Petty certainly learned that late in his high school career in Midlothian, Texas, a small town outside of Fort Worth, when he capped a star-studded high school career by committing to play college football at the University of Tennessee. A coaching change came for the Vols and newly hired coach Lane Kiffin sent an assistant coach to tell Petty his services were no longer required.

He wound up at Baylor, which initially did not have a scholarship for him, and then spent two years waiting to start for the Bears, spending one year backing up Robert Griffin III and another backing up Nick Florence, after thinking he would get a chance to take Florence’s job.

The waiting wore on Petty and turned him from a positive team-first guy to a sour teammate. It also caused him to re-examine his true relationship with Jesus Christ.

“That is the biggest misconception, (among non-Christians) about Christians and life,” Petty says. “It doesn’t mean everything is going to be easy. It may mean you’re going to have a harder life, not an easier one. 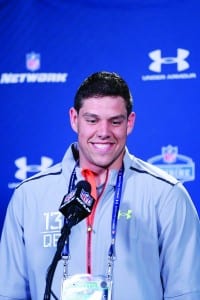 Ecclesiastes talks about that in the Bible. Life is up and down. It’s a mixed bag. What life I do have is because I have faith, have faith in hard times, praise Him in good times.”

After being mentored by Waco pastor Chris Wommack while he was at Baylor, Petty was baptized in Wommack’s swimming pool two years ago as a symbol of the recommitment of his renewed faith in Christ.

Baylor head coach Art Briles, was one of the first to notice the new attitude of Petty during the summer before he became a starter.

“Bryce is one of the best, really,” Briles says. “It was great to see his life and the way he has turned it. It’s great to be here to honor him and see what he has become as a man and a player.”

After the 2013 season, many felt the individual honors would continue to roll in for the humble leader, but after his early 2014 injury, a road loss which knocked Baylor from the top of the FBS playoff conversation and a few subpar games, Petty said he gained an eternal insight midway through his senior season.

“Before the (Oklahoma) game, I saw that God has a bigger plan for this in my life,” Petty says. “It’s bigger than winning the Heisman, winning a national championship, a totally bigger plan for my life. For me to figure that out is great and let it ride on Him.

Petty responded with one of his best games of the year, leading Baylor to its first-ever victory at Oklahoma and one of the worst home defeats in Bob Stoops’ Oklahoma coaching career. That launched Baylor to its second consecutive conference title, making Petty the first player in Baylor history to quarterback back-to-back conference champs.

But more importantly, he finished his college career knowing his personal faith in Christ was his, not his friend’s or his pastor’s faith, not his parent’s faith, but his solely, worked out through a daily relationship.

“Everybody has to make it personal at some time of their life,” Petty says. “It’s different for everyone, there’s no handbook. You can do it at 18, you don’t have to do it at age 7 or 27 or 57, but everybody has got to make it personal. It became personal for me two years ago. I’m not doing this for parents; I’m doing it for Him.”
It’s a lesson he plans to take into the next, unclear chapter of his life: playing professional football in the NFL.

“Where God takes it, that’s where I go,” Petty says. “He is going to work it out. That is my platform, inside and outside the locker room. Believe it or not, you can still love on people, and that’s what I plan to do.”

Art Stricklin is a longtime contributor to Sports Spectrum. This feature was published in Sports Spectrum’s Summer 2015 print issue. Log in HERE to view the issue. Not a subscriber? Subscribe HERE to receive eight issues of Sports Spectrum a year.