In the glorious moments of championship celebration, athletes commonly lift an index finger over their head and point toward the sky. Their preceding months—their entire careers even—were dedicated to the pursuit of this one thing.

Matthew Slater knows what it is like to bask in such an accomplishment.

This past February, he literally fell, knees to the ground, after the New England Patriots defeated the Seattle Seahawks 28-24 in Super Bowl XLIX. The depth of the joy he experienced was beyond what words could describe. His first NFL title instantly became like a family heirloom, an achievement that eluded his Hall of Fame father, offensive tackle Jackie Slater, in 20 seasons with the Los Angeles Rams.

Matthew knelt with both arms raised high and wide, his helmet in his right hand and his mouthpiece in his left. He let out a mighty shout.

Yes, he was thanking God. But, mostly, he was worshiping the Lord. 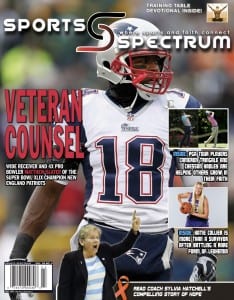 “Football is temporary,” he had said just a few days earlier. “This stage could be the end-all and be-all for some people. Don’t get me wrong, I’m thankful for this opportunity. I think it’s a great experience for all of us. But, at the end of the day, I’m living for eternity.”

For Matthew, that championship moment wasn’t so much about just being number one, but rather about sharing it with the One whose love consumes him, Jesus.

Though not widely known around the NFL, Matthew is a four-time Pro Bowler for his standout play on special teams. He’s regarded as football’s best “gunner”—a kamikaze-style player who relentlessly runs downfield en pursuit of a kick returner to tackle or an opponent to block.

God has given him tremendous favor with his New England teammates and coaches. He is a team captain and unofficial player pastor, a true leader in and outside the locker room.

“The team gravitates toward him, and it’s clearly God working through him,” said left tackle Nate Solder. “If anyone has some sort of issue with their family or something going on off the field, they seem to have a trust for asking Matt because he’s got a lot of wisdom.”

Tom Brady, one of the top quarterbacks in NFL history, gave Matthew a big hug after the Super Bowl win. Another of the team’s stars, tight end Rob Gronkowski, is inspired by Matthew’s relentless playing style and work ethic.

“He’s a huge competitor and a huge component of our team,” Gronkowski said. “He makes other players on the team want to go the same speed he’s going.”

Former Patriots running back Shane Vereen, now with the New York Giants, has called Matthew the “heartbeat” of the Patriots and claimed “there are zero words to properly describe” the impact of his leadership.

Jackie Slater says only God could’ve given his son such a platform.

“There’s no doubt whatsoever that the Good Lord wanted him to be doing what he’s doing now,” said Jackie. “When you look at his journey, I thought he was going to be something other than a football player. I encouraged everything other than football because I knew how hard it was, and I didn’t see him being big enough to be really good at it without getting hurt.”

Matthew (now 6-feet, 205 pounds) played baseball and ran track before finally starting football in the ninth grade, when Jackie says his son “became the happiest kid around, all of a sudden.”

Matthew was blessed with 4.4-second speed in the 40-yard dash and eventually earned a scholarship at UCLA, where he had several injury setbacks. He was a part-time wide receiver and safety and excelled as a kick returner his senior year in 2007, amassing a school record 986 kickoff return yards. He also tied the Pac-10 Conference (now Pac-12) record that season with three touchdowns on kickoff returns, a mark set in 1974 by Southern California’s Anthony Davis.

It seems that Patriots coach Bill Belichik had a unique role for Matthew from the beginning, picking him in the fifth round of the 2008 draft. Matthew made his first Pro Bowl in 2011 and has been selected every year since. He credits Belichik’s strong commitment to special teams.

“I really think being here has been a God-send because there aren’t many teams that approach the special teams phase of the game the way we do and put as much time into it as we do,” Matthew said.

His contributions as a Patriot have been far-reaching. Owner Robert Kraft presented him the team’s community service award for 2013.

“We knew the day that we drafted Matthew that he was going to be special,” Kraft said at the time. “He is consistently one of the most active players in the community and is always eager to volunteer. Matthew has an engaging personality and is generous with time to help our community.”

Matthew’s life took on a new dimension six days after the Super Bowl when he married his long-time girlfriend. As he seeks to become the best husband possible, he looks to God’s Word.

“Without a playbook, you’re lost, whether it’s on the football field or in life,” he said. “It gives you instruction, and it gives you direction…so that playbook is a vital lifeline.”

Matthew, 30, eventually would like to become a Christian counselor, focusing mostly on one-on-one ministry.

“I’m not really comfortable with the cameras and the attention and things like that,” he said. “I think dealing with people in a personal setting is more my thing. At the end of the day, it’s not about me [or] anything here. It’s about getting to know Jesus and to understand that He wants to do something in your life.”

“I think one of the biggest lies the devil tries to get you to believe is that it’s just you [that’s] struggling,” he said. “That’s not true. Even the most mighty men of God have struggled with different things. You look at David and his life and see some of the struggles he had, yet he was a ‘man after God’s own heart.’

“So the first thing is being ok with asking for help. As men, a lot of times we have a lot of bravado and pride and don’t like to admit we need help. But in that help comes forgiveness, grace and a second chance—a third, fourth and fifth chance as long as you continue to seek God and try to do what He asks you to do.

“As I navigate life with God’s help, it gives me a sense of comfort knowing that [even though] I’m going to make mistakes and there are going to be highs and lows, at the end of the day, I’m covered with grace and mercy.”

Jackie Slater says he’s humbled by and proud of his son’s success and impact on other people. In turn, Matthew credits his father’s influence and shining example.

“Nothing took precedent over faith for him,” Matthew said of his dad. “Despite all that he accomplished in his career, my father understood that without Jesus his life had no purpose, no direction and really was nothing without Him.

“So I think he was able to convey that to my brother and me and really teach us to be men who fear God.”

Matthew speaks and carries himself with confidence and boldness, unashamed of the Gospel, not at all self-impressed.

“I’m an everyday soldier for Christ,” he said. “I’m fighting the good fight…one step at a time, one day at a time.”

He holds fast to Romans 8:28, secure in the Lord’s goodness.

“When [God] talks about working things together for good, it’s not necessarily for my personal good,” Matthew said.”It’s for the greater good, the good of the Kingdom. The more I think less of me and more of Him, the better off I am.

“Every day we wake up, the Lord’s been good. And even when that day comes when we don’t wake up, He’s still been good. … The ultimate victory already has been won on Calvary.”

Charles Chandler works for the Billy Graham Evangelistic Association’s Decision magazine and is a former Charlotte Observer sports reporter who covered the Carolina Panthers for more than two decades. This story was published in Sports Spectrum’s Fall 2015 DigiMag. Log in HERE to view the issue. Subscribe HERE to receive eight issues of Sports Spectrum a year.