An Audience of One: The faith that drives Carson Wentz

Tucked inside a local IHOP, momentarily shielded from the brisk Midwestern air and inevitably closer to the smell of made-to-order pancakes, is Carson Wentz.

He isn’t hard to miss, at least to the Bison football fans that will later stumble upon the restaurant, coaxing a few pictures out of him. After all, he’s 6-foot-5. He’s got reddish hair. And he’s the quarterback that led North Dakota State University to its fourth consecutive national championship just a few weeks earlier.

But Wentz isn’t at IHOP to gauge his celebrity status. He’s probably not even there for the pancakes.

No, he’s there to sit down with Kam Wingenbach, who first called Carson a best friend in seventh grade.

Minutes go by. Hours go by. The banter of reunited buddies from Bismarck, however, is not particularly centered on the throws that Carson, now 24, made at Toyota Stadium, giving NDSU another title and plenty of ESPN screen time. Or the on- and off-field attributes that, in roughly a year’s time, will make him the second overall pick in the NFL draft.

“He was asking about my faith,” Kam recalls.

Good old-fashioned values could always be found in Carson’s presence. Like countless others in and outside of Century High School, their alma mater, Kam could attest to that. After all, he grew up, played sports and hung out with Wentz. But this sitdown was different.

“He really laid it all out. I learned a lot about him that day.”

Coach after coach, teammate after teammate and friend after friend has made the story of Wentz’s character, as opposite a me-first mentality as could be, as compelling as the young man’s rapid ascent on the football field. And yet that story is simultaneously the most unsurprising revelation about big No. 11.

Perhaps it is a testament to the studious, sandal- and glasses-wearing persona he embodies. The one that, even now, buried beneath daily chatter of Wentz’s sudden rise to Eagles prominence and occasional comparisons of the ex-Bison to the game’s great Hall of Fame gunslingers, also has the quarterback on a narrow path with otherworldly motives. 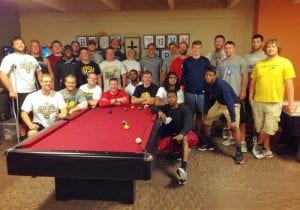 In the front row, Trevor Gebhart, third from left; and Carson Wentz, fourth from left, pose at a church event with other North Dakota State University teammates during the summer of 2014.
(Photo courtesy of Trevor Gebhart)

“He plays for the only perfect person to walk the Earth,” says Trevor Gebhart, who spent four years with Carson at NDSU, playing wide receiver. “You see guys like Tim Tebow and Steph Curry who use their platform to show their faith, and I think he’s right up there with that kind of influence.”

When Wentz got his signature wrist tattoo in college, Gebhart says he remembers asking about the meaning behind it. The “A01” inked just below Carson’s throwing hand, as has been well documented, stands for an “audience of one.” It is a symbolic hat tip to playing not for pride, for fame or for approval but for the Lord. And it is referenced in additional tattoos of “Isaiah 41:10” and “Proverbs 3:5-6.”

“I couldn’t even tell you how many Bible studies Carson and I did together,” he says. “He approaches every day of life like that, using his faith. Plenty of guys would go study with him and pray with him.”

At the professional level, that is still the case.

After his debut on an NFL stage, Wentz pegged worship music as his cure for pre-game jitters in a Week One press conference. Eight of his tweets during a riotously productive first month on the job ended with an “#A01” salute. 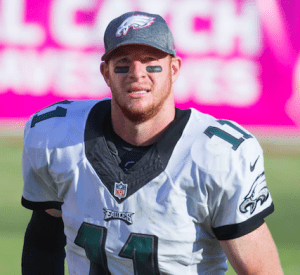 As Nick Fierro detailed in Allentown’s The Morning Call, Wentz is actually but one of a growing number of Eagles who seek to pursue Jesus as wholeheartedly as they do a victory on the gridiron.

A group of players, in fact, teamed up to virtually preach the Gospel when donning and promoting “Audience of One” cleats during the NFL’s December “My Cleats, My Cause” campaign.

And weeks later, ESPN’s Tim McManus relayed accounts of everything from baptisms in the team pools to late-night prayer sessions at team hotels.

“I remember we would talk about all the glory of those championships,” Gebhart says, referencing the NDSU dynasty. “You see the confetti, the trophies, the rings, but the glory of it all is gone in five minutes. We looked at that as reason to play for something more.”

Esley Thorton, a former NDSU quarterback-turned-linebacker who once competed with Wentz for the Bison backup job, remembers his old teammate showcasing that very mentality. From within the privacy of pre-game locker rooms to the biggest of college football stages, he recalls Carson marching to somewhat of an unfamiliar tune.

“All the money and the fame is like a bonus, but he’s not materialistic by any means,” Thorton says. “He cares about people. He was always there for guys and an advocate for what he believed in.”

Being a big, strong and successful athlete surely won Wentz some followers. But the humility, the bold selflessness, at the core of his leadership, whether shone on the field or far from it, made him the ultimate role model. Most would argue it still does, and not just the 69,176 at Lincoln Financial Field who, in September, realized this kid could also be an NFL phenom.

The beautiful thing about Jesus is that it isn't about what we have or havent done, its all about what He's already done for us! #Grace #AO1

“He’s always been the same guy,” Wingenbach says. “He digs deep into whatever he does, including his faith.”

And faith is exactly what is behind the leadership – the likability – with which Wentz is so quickly associated.

It is something he shares with other Eagles standouts, from Jordan Matthews to Malcolm Jenkins, and something he never hesitated to share with companions back home. Thorton recalls Carson bringing him to church a few times, though “he was never pushy about it.”

It is also something that, like Wentz’s physical attributes, took shape well before the emergence of the career he’s basking in today.

Carson’s upbringing had sprinklings of exposure to the spiritual passions he now literally wears on his sleeve. His family pinpointed faith as the key component in keeping Wentz grounded during his inevitable climb to stardom, as Jeff Kolpack relayed in The Forum of Fargo-Moorhead. His earliest athletic mentors never knew him as anything other than a model of modest virtue.

“He would never, ever, ever take any credit for anything, even in high school,” says Darin Mattern, whose Century High School basketball team won a state title in 2011 with Wentz on the roster. “He’d rather accept failure even if it wasn’t his fault just to take pressure off his teammates.”

Wentz virtually echoed that when Philly media asked him in October about the hype surrounding his success.

“I’m very cautious about taking too much praise,” he said.

And that probably will not change.

“Football’s going to go away someday,” Mattern says, “but Carson, he’s got a pretty good foundation.”

All the preparation that goes into being the most heralded Eagles quarterback since Donovan McNabb, of course, is part of the reason Wentz shines as brightly as he does. The alleged photographic memory. The old-fashioned will to win. The wide smile after another huge Sunday performance.

But the fame – and there’s surely more to come – does not wipe away what matters most.

In August, when Wentz suffered a hairline fracture in his ribs, Gebhart says he let Carson know he was praying for him. And those kinds of moments, from the NFL player Bible studies to the daily reminders of a life shaped by humility, are merely fruits of the faith that rests firmly within this particularly special quarterback – this particularly unashamed man.

It is probably what once stirred conversation back at an IHOP in Fargo.

Cody Benjamin is the manager of EaglesNotebook.com. Born and raised in Lancaster County, Pa., he is the author of “Outcast,” “Skyline Teardrops” and “The Eagles Notebook.” Also a staff writer for the Faribault County (Minn.) Register, Cody has previously contributed to LNP Media Group, ESPN Radio 1450/1430 and the Pittsburgh Sports Report, as well as SB Nation and Blue Ridge Communications.You can follow him on twitter @CodyJBenjamin.