Clemson wide receiver Hunter Renfrow had a simple statement to me during our podcast interview back in May.

“Life’s about Jesus. It starts and ends with that.”

The 21-year-old wide receiver burst on to the national stage in January, when he caught the game-winning touchdown with one second left, leading Clemson to a 35-31 win over Alabama for the national championship.

Clemson's WR Hunter Renfrow is a guest on Episode 9 of the podcast.

Hunter grew up in Myrtle Beach, S.C., one of six children to Suzanne and Tim Renfrow. Both his mother and brother, Jordan, attended Clemson University, so for Hunter, the decision to attend Clemson and play for the Tigers seemed to be something he was always destined to do.

“It just felt right,” Renfrow said. “Through a lot of prayer, God was just telling me that he wanted me at Clemson. I enjoyed going to Clemson, so that’s where I ended up.”

Another major reason why Renfrow chose Clemson was his coach, Dabo Swinney. Having a coach whose faith and family mattered just as much, if not more than football, was something Hunter was really drawn to.

“He genuinely cares about people,” Renfrow said on the podcast. “He’s such a great role model. He’s taught me far more about life than he has football. And that’s a credit to him and what he believes in.”

Galatians 5:13 "You, were called to be free. But do not use your freedom to indulge the flesh rather, serve one another humbly in love."

Renfrow spoke about a time last season, after a loss to Pittsburgh, where Swinney had a hunch his team was destined for something special.

“It was after that loss,” Renfrow said. “Coach went to church the next day, and after his son Clay got baptized, he looked back in the upper deck of the church, New Spring Church in South Carolina, and saw 10 to 15 football players huddled together and praying. That was pretty neat and he said that he knew from then on that we would be alright.” 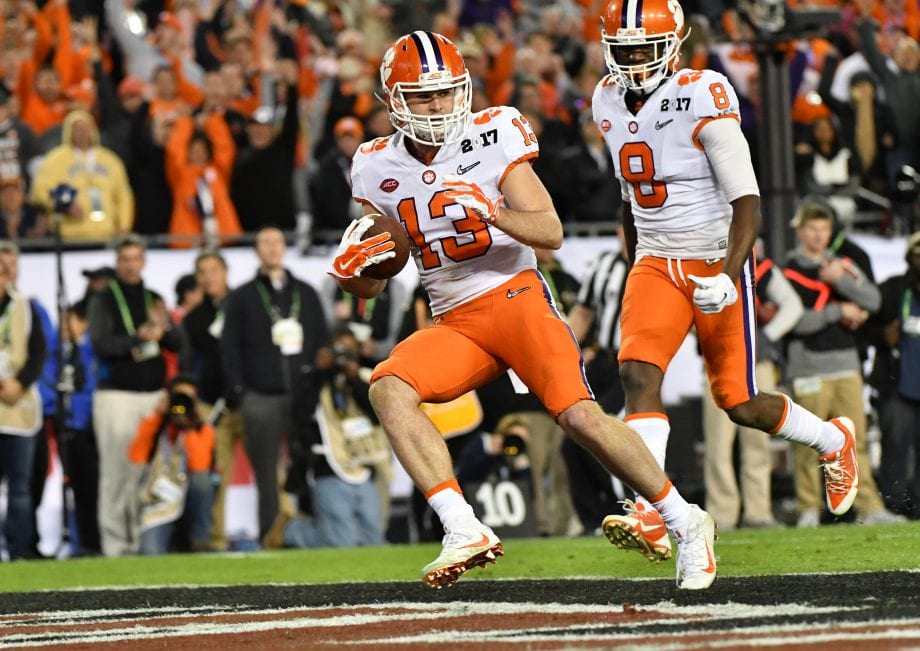 After scoring the dramatic touchdown that resulted in a national championship, Renfrow shared how in the days and weeks after that moment, his life as he knew it, changed forever. The platform God had given him was not the same as it was prior to that catch.

“I’ve definitely gotten asked to speak at a lot more churches,” Renfrow said. “But I’m just trying to be that positive light. I’ve never really been a real vocal guy. Just how I carry myself and my actions, just try to reflect the Lord because life is about Him. When we forget that and try to do it on our own, He corrects us really quick.”

Hunter Renfrow and the Clemson Tigers open defense of their 2016 championship on Sept. 2 at home vs. Kent State.

You can listen to the entire interview with Hunter Renfrow on the podcast by clicking below.