David Carr was the first overall pick in the 2002 NFL Draft and played 11 seasons in the NFL as both a starter and backup at the quarterback position and even won a Super Bowl ring as Eli Manning’s backup with the Giants in 2011. He is now an NFL Network analyst but might be better known as the brother of Raiders stud QB Derek Carr.

David is also a very outspoken Christian who lists Jesus first on his twitter bio. 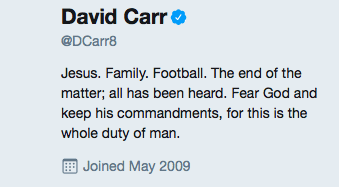 Today, the news cycle, including the sports world, was focused on the solar eclipse, the first total solar eclipse in the continental United States since 1979.

Many NFL teams took to twitter to partake in the solar eclipse festivities.

Watching the #SolarEclipse2017 at The Star just seems right ? pic.twitter.com/zqmBMpj3DF

Viewing party on the field! ?? #SolarEclipse2017

But it was David Carr’s tweet that served as a reminder of our creator, the God who made the moon, the sun, the stars, and the earth.

"The Sun will burn your eyes out from 92 million miles, and you expect to casually stroll into the presence of its creator"