Jake Olson was born with retinoblastoma, a rare cancer of the retina. He lost his left eye at 10 months and went through numerous procedures designed to save the right eye. He was 12 years old when doctors determined it would need to be removed.

This was a time in Olson’s life when he was also a die-hard USC football fan. Before having the surgery that would leave him blind, he wanted to watch USC and spend as much time as possible with the club. The night before he had the surgery, then-coach Pete Carroll brought Olson to a USC practice and allowed him to be part of the team.

You can watch Jake’s journey from 2009 below.

Jake said back in 2010 that the biggest reason he was able to take on the surgery, and blindness was because of his strong faith in God.

“The biggest reason why I overcame and still have a positive attitude is because I have a strong faith in the Lord Jesus Christ.”

And now these three remain: faith, hope, and love. But the greatest of these is love. 1 Corinthians 13:13

Fast forward eight years. It’s 2017, and Olson again finds himself hanging out with the USC Trojans. But this time, he’s wearing pads, a uniform and helmet as a member of the team.

In Week 1, after a USC touchdown and with the Trojans leading 48-31 over Western Michigan, Olson, wearing number 61, was called upon to go into the game and snap for the extra point.

Olson delivered a perfect snap and his moment, his dream, was complete. He would enter into a game as a member of USC’s football team.

Afterward, Olson spoke with the Los Angeles Times and made sure he pointed people back to the One who gave him life.

“There’s a beauty in it,” Olson told the LA Times. “If you can’t see how God works things out, then I think you’re the blind one.”

On Sunday, Olson took to his own Twitter page to express what the past few days have been like for him. 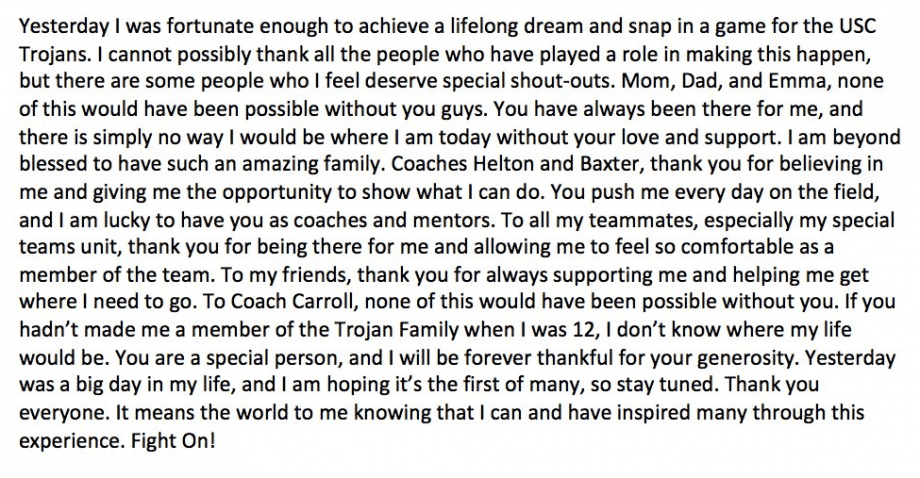 Olson isn’t letting his shortcomings stop him from loving God and loving life.