This article was originally printed in the October 2013 edition of Sports Spectrum. 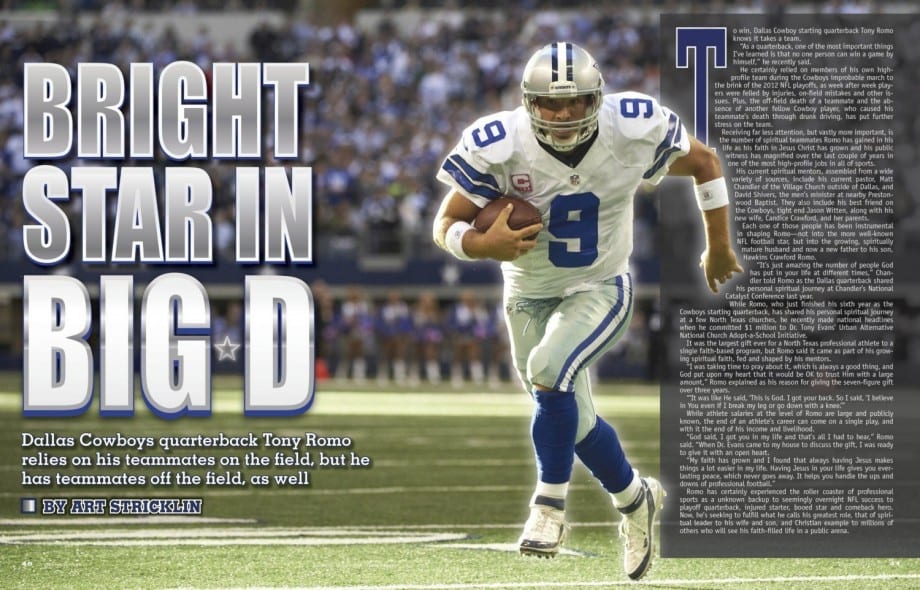 “As a quarterback, one of the most important things I’ve learned is that no one person can win a game by himself,” he recently said.

He certainly relied on members of his own high-profile team during the Cowboys improbable march to the brink of the 2012 NFL playoffs, as week after week players were felled by injuries, on-field mistakes and other issues. Plus, the off-field death of a teammate and the absence of another fellow Cowboy player, who caused his teammate’s death through drunk driving, has put further stress on the team.

Receiving far less attention, but vastly more important, is the number of spiritual teammates Romo has gained in his life as his faith in Jesus Christ has grown and his public witness has magnified over the last couple of years in one of the most high-profile jobs in all of sports.

His current spiritual mentors, assembled from a wide variety of sources, include his current pastor, Matt Chandler of the Village Church outside of Dallas, and David Shivers, the men’s minister at nearby Prestonwood Baptist. They also include his best friend on the Cowboys, tight end Jason Witten, along with his new wife, Candice Crawford, and her parents.

Each one of those people has been instrumental in shaping Romo—not into the more well-known NFL football star, but into the growing, spiritually mature husband and now a new father to his son, Hawkins Crawford Romo.

While Romo, who just finished his sixth year as the Cowboys starting quarterback, has shared his personal spiritual journey at a few North Texas churches, he recently made national headlines when he committed $1 million to Dr. Tony Evans’ Urban Alternative National Church Adopt-a-School Initiative.

It was the largest gift ever for a North Texas professional athlete to a single faith-based program, but Romo said it came as part of his growing spiritual faith, fed and shaped by his mentors.

“I was taking time to pray about it, which is always a good thing, and God put upon my heart that it would be OK to trust Him with a large amount,” Romo explained as his reason for giving the seven-figure gift over three years.

While athlete salaries at the level of Romo are large and publicly known, the end of an athlete’s career can come on a single play, and with it the end of his income and livelihood.

“God said, I got you in my life and that’s all I had to hear,” Romo said. “When Dr. Evans came to my house to discuss the gift, I was ready to give it with an open heart.

“My faith has grown and I found that always having Jesus makes things a lot easier in my life. Having Jesus in your life gives you everlasting peace, which never goes away. It helps you handle the ups and downs of professional football.”

Romo has certainly experienced the roller coaster of professional sports as a unknown backup to seemingly overnight NFL success to playoff quarterback, injured starter, booed star and comeback hero. Now, he’s seeking to fulfill what he calls his greatest role, that of spiritual leader to his wife and son, and Christian example to millions of others who will see his faith-filled life in a public arena.

Despite his college success, including school records and All-America honors, Romo was an undrafted free agent, meaning every NFL team had more than 300 draft picks and not one of them thought he was worth a chance to try and make their team.

Finally, the Cowboys called and said he could come down for a tryout, but Romo didn’t know that his next spiritual mentor was waiting.

“The way it works in the NFL, is that if you’re a free agent they just send you a plane ticket and tell you to be at the hotel at a certain time with all the other free agents to start meetings and tryouts,” Witten recalled.

He arrived in Dallas on an early spring night, alone and not knowing anyone, but as he rode on the rental car bus to pick up his car to drive to the team hotel, he saw Cowboys draft pick tight end Witten sitting at the other end of the bus.

“I was like, ‘Wow, there’s Jason Witten. He’s a draft pick. I wonder if he will talk with me,’” Romo remembered.

But they also became accountability partners with Witten sharing his incredible spiritual story (profiled in Sports Spectrum in the Fall 2011 issue) sharing rooms on the road and vacations together.

After finally making the team as a third-team quarterback, Romo had very little actual work to do other than practice sparingly when the other quarterbacks were resting during weekly drills and hold a clipboard and earpiece on the sideline during the game.

For a young, single athlete like Romo, that led to a lot of down time and eventually led, in 2004, to Shivers at Prestonwood. A former college basketball player at SMU who once traveled with Athletes in Action, Shivers loved to play lunchtime basketball and Romo found himself a regular in the games.

“As a single guy, especially during the offseason, Tony was looking for things to do and he would come up to the church and play ball with us,” Shivers said. “I had a great opportunity to build a relationship, not just shove the God card down his throat.”

When the two friends would beat each other down on the basketball courts, Shivers would also use the time to beat into his new friend God’s Word and how to walk with the Lord as a young, single Christian.

“It’s been awesome to see what God has done in Tony’s life and worked in his heart,” he added.

The relationship has matured and Shivers is now involved with the Cowboys chaplaincy program. Now the Romos, Shivers and Wittens regularly have dinner together.

As Romo’s NFL career continued to rise, taking over as the Cowboys starter midway through the 2006 Dallas season and enjoying immediate success, he was romantically linked to several high-profile girlfriends, including country singer Carrie Underwood and pop star Jessica Simpson.

The girl who finally captured his heart, and had plenty of spiritual maturity of her own, was a local Dallas girl. Candice Crawford grew up going to church at Prestonwood and attended nearby Trinity Christian Academy before going to the University of Missouri to pursue a journalism degree.

Before coming back to Dallas to work as a local sportscaster, Crawford was named Miss Missouri USA. Crawford said in a pre-marriage interview that discovering Romo’s spiritual side was the key for her.

“Something that was always most important to me was finding someone that had the same beliefs and faith as I did,” Crawford said. “As soon as we had talked about that and shared those types of feelings of our faith, I think that was when it was a definite deal maker.”

In fact, it was Prestonwood’s Shivers who performed the Dallas wedding in May 2011 along with Evans. The joining of two families led to Romo’s newest spiritual teammate.

Crawford’s parents were attending the Village Church in the Dallas suburb of Flower Mound and recommended the newlyweds try out the multi-location, non-denominational church.

That’s where Romo met Chandler, who has taken the former First Baptist Church Highland Village, with 160 members, to the Village church, with 10,000 members in several locations.

Chandler, who is roughly the same age as Romo, has a grounded personal faith and is a testimony to God’s healing power as he frequently speaks of his healing from a brain tumor. They connected over sports and their shared love of God, leading Romo to travel with Chandler to several church conferences to talk about his faith.

“They have become great friends over the years,” said church elder Rik Massengale.

But as he becomes increasingly more public about his personal faith in God, he knows he will become a more divisive figure in the eyes of some. He’s not blind to the very public trial and media bashing of quarterback Tim Tebow, but is determined to lead the way for his family.

“One thing as I grow into a husband is being a spiritual leader of my family, my wife and the people I surround myself with,”  Romo said.

“I heard John Wooden, the UCLA basketball coach for all those years, once said success is peace of mind. For me, my greatest peace of mind, my greatest success, you might say, is when I walk the spiritual journey, when I’m a spiritual leader to my family and the people I’m around. That’s what I’m striving for, and that’s where I hope to continue to go and grow.”

All part of Romo’s spiritual team, unseen by many, but eternally important to the NFL superstar.

This story was published in the Vol. 27, No. 4 print issue. Art Stricklin is a longtime contributor to Sports Spectrum and the vice president for public relations at Marketplace Chaplains USA in Plano, Texas.