It’s a simple gesture, but it touches the hearts of many.

At the end of the first quarter of Iowa Hawkeyes football games, the fans and even the visiting team at Kinnick Stadium stand up and turn their attention to the Stead Family Iowa Children’s Hospital overlooking the stadium. Then everyone waves at the patients and families watching the game. It’s called the “The Kinnick Wave.”

It’s a college football tradition that’s quickly catching on. Even Chicago Cubs first baseman Anthony Rizzo left an Instagram post about the wave. “This is by far the best college tradition of all time,” he said in the post viewed over 200,000 times.

This is by far the best college tradition of all time. #TheWave

The wave was first started on September 2, when Iowa hosted the Wyoming Cowboys. The children and families inside the children’s hospital go to the 12th floor to see more than 70,000 football fans wave to them every home game.

The origins of the wave came by Krista Young, who posted the idea on the Hawkeye Heaven Facebook page. 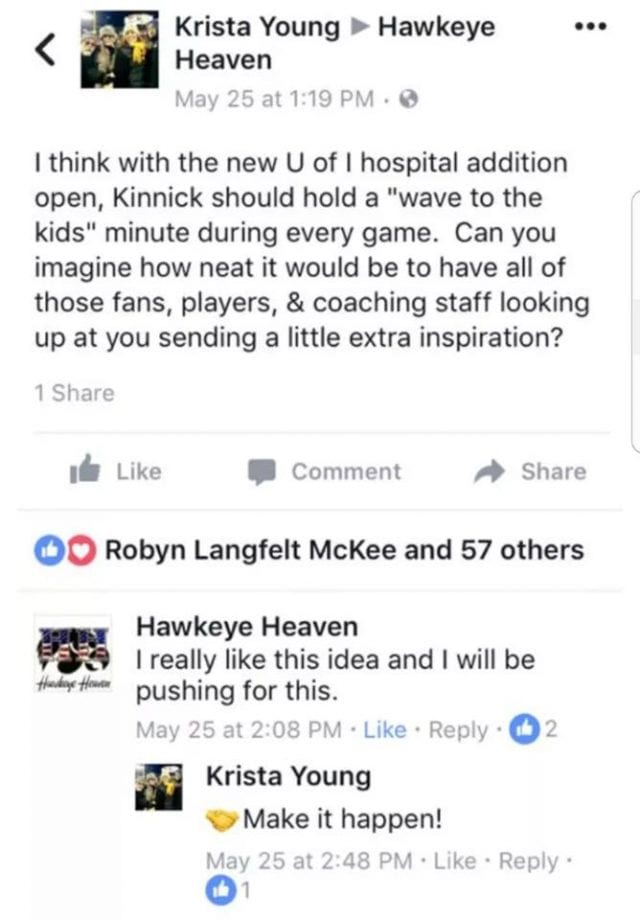 “It was two sentences. It was just a thought,” Young said to Land of 10.com. “I kept seeing pictures of those kids [at the hospital] before football season. And practice started and seeing them looking down on the field, it’s heartbreaking. Just a quick thought, two seconds to type and it turned into this amazing, amazing blowout. There’s not a fancy story behind it. Just short and sweet, and it took off.”

Those simple sentences have become a treasured college football tradition, especially to the parents who have their children at the Stead Family Iowa Children’s Hospital.

“It was, honestly, really heartwarming,” Amy Condon said to Land of 10.com.