By Jason Romano Oct 24, 2017
Pro Football Hall of Famer Andre Reed gets baptized in the Jordan River in the summer of 2017. (Screengrab: NFL Films/YouTube - https://www.youtube.com/channel/UCY3NEq2LYrmdoGkevo9BH5A)

This past summer, Patriots owner Robert Kraft took 18 Pro Football Hall of Famers on a spiritual journey to the Holy Land in Israel.

Among the highlights of the trip was a moment when the players had the opportunity to be baptized in the Jordan River, the same place where Jesus was baptized in the Gospels.

Click the picture below to watch players get baptized. 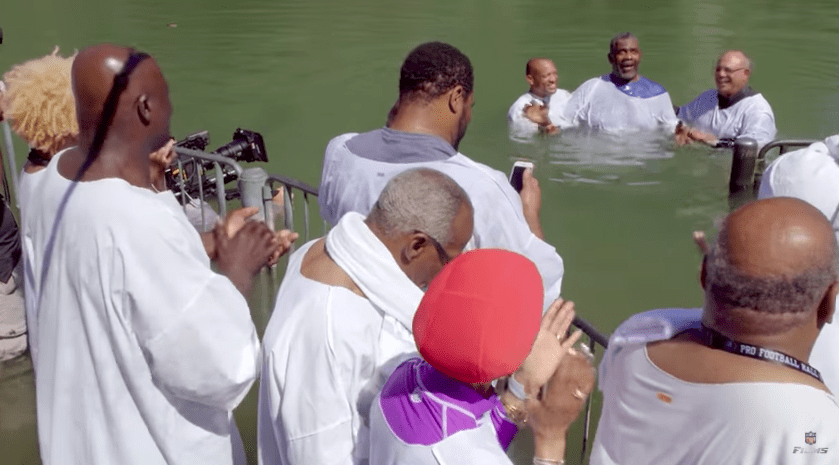 Helping to perform the baptisms was Arizona Cardinals legend Aeneas Williams, who also serves as a pastor at The Spirit Church in St. Louis, Missouri. In the video, Williams is seen sharing what baptism means.

“Baptism is an outward sign of what has already happened on the inside of us,” said Williams. “Getting in the water, literally, your sins have been washed away and when you come up, it is symbolically a new person. The old person has been buried. We rejoice in the Lord. Hallelujah.”

Among the players to get baptized in the NFL Films video are Steelers legends “Mean” Joe Greene and Jerome Bettis, Vikings legend Cris Carter, and Bills legends Bruce Smith and Andre Reed.

“Having them being baptized, its the greatest thing in their life,” Kraft said in the NFL Films video. “The people here impact America and can be positive role models, so if they’re happy and they’re spiritual and doing good things, I mean, they’re great guys.”

This isn’t the first time NFL players have been baptized in the Jordan River. In February of 2017, Saints Cam Jordan, Titans Delanie Walker, Jaguars Calais Campbell and Eagles Mychael Kendricks were among those to profess their faith in the Holy Land.

Posted by America's Voices in Israel on Thursday, February 23, 2017