Ryan Succop sees God’s hand in his ability to make a living with his right foot.

As the last overall pick of the 2009 NFL Draft, Succop earned the dubious title of “Mr. Irrelevant.” The last pick receives that label because players drafted so low typically never play in the NFL.

Succop (pronounced “SUCK-up”), however, is a notable exception. Not only is the Tennessee Titans’ placekicker competing in his ninth NFL season, he entered the 2017 season ranked 20th all-time in career field-goal percentage (minimum 100 attempts) and has set or tied several league or franchise records along the way.

Succop has zero doubt in his mind that God has blessed his career: “Every gift and ability I have obviously comes from Him,” he said.

With the Kansas City Chiefs in 2009, Succop tied the NFL record for best field-goal percentage by a rookie (minimum 20 attempts), putting 86.2 percent of his kicks through the uprights. He also led all rookies with 104 points. 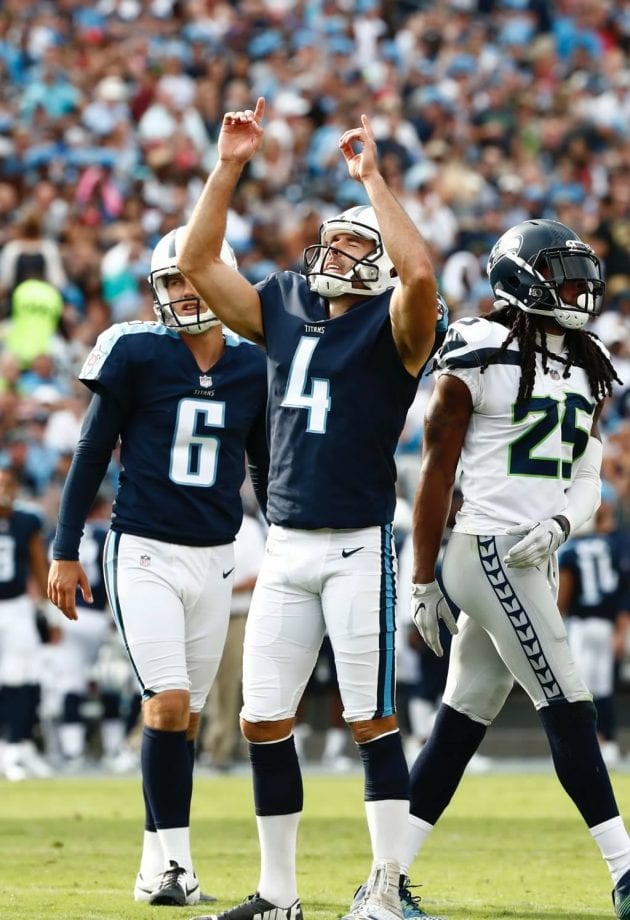 From there, the records kept coming: Succop set a Chiefs franchise mark by converting six field goals in a 2012 game and added another with 14 points in Kansas City’s postseason loss to Indianapolis in 2013.

“Ryan always had something special about him,” said Titans special-teams coordinator Steve Hoffman, who also coached Succop with the Chiefs. “It hasn’t surprised me that he’s as good as he is.”

Since joining the Titans, Succop has made a franchise-record 56 consecutive field goals from inside 50 yards. Last season he made 91.7 percent of his field goals (22 of 24), the highest single-season percentage of his career.

Kicking field goals can be a high-stress occupation: “When you’re performing before 75,000 fans out there and you mess up, everyone knows,” Succop said. “It can be a little intimidating.”

That’s especially true when a team is contending for a playoff spot or competing in the postseason when a missed kick could be the difference between keeping the team’s season alive and watching it end in heartbreak.

To deal with the anxiety, Succop reads Philippians 4:6-8 before every game and recites it in his head before every kick. “Every time I read that and pray that, the Lord has blessed me with peace and ability,” Succop said. “God makes clear that he doesn’t want us to be anxious. Every time we’re anxious about something, we’re not trusting in him.”

He learned that lesson off the field, too: Soon after Succop’s wife Paige gave birth to their son Cooper in 2015, doctors discovered that Cooper had hip dysplasia, a condition in which the hip joint is loose in its socket. Cooper had to wear a brace called a Pavlik harness for four months so the condition could be corrected.

Cooper even spent a day in a cast when he was four weeks old, and was supposed to wear it for a month. However, the Succops sought another doctor’s opinion after Cooper’s placement in the cast. After prayerful consideration, the Succops had Cooper’s cast removed and returned him to the Pavlik harness.

Today, Cooper is 2 years old and “is completely fine now,” Ryan Succop said: “It’s amazing – God put just the right doctors there. It was such a blessing. Everything worked out the way it should.”