Injuries are a part of sports. Some are more devastating than others. But often, it’s not the injury itself, and rather how we respond to it, that stands out most.

NFC East Champs! So proud of the resiliency of this team. Such a special group of men.

And I greatly appreciate all the prayers! I know my God is a powerful one with a perfect plan. Time to just lean in to him and trust whatever the circumstances! #Proverbs3:5-6

Wentz and the Eagles clinched the NFC East title, but in the midst of trying to lead his team to a touchdown, the Philadelphia quarterback was injured as he dove into the end zone late in the third quarter.

Wentz was hit hard as he scrambled into the end zone on a play that was called back because of holding. He stayed in the game and threw a 3-yard touchdown pass to Alshon Jeffery four plays later to give the Eagles the lead. On the next series, Wentz headed for the locker room and was replaced by backup QB Nick Foles.

An MRI Monday confirmed that Wentz did indeed tear his ACL and will miss the remainder of the season. Foles will replace Wentz.

On his Twitter page following the game, Wentz shared his love for his team, and also an appreciation for the prayers that have been sent his way following the injury.

“I greatly appreciate all the prayers! I know my God is a powerful one with a perfect plan. Time to just lean in to him and trust whatever the circumstances!”

He then shared Proverbs 3:5-6 which states: “Trust in the Lord with all your heart and lean not on your own understanding. In all your ways acknowledge Him and He will make your path straight.”

Many teammates and other athletes around the sports world tweeted their best wishes and prayers to Wentz.

Praying for a speedy recovery for @cj_wentz this morning. This game is so unpredictable. So many injured this year and every other. In wins or losses, injury or health, success or failure we live and move for an Audience of One! Keep letting your light shine brother!

Prayers up to the brother @cj_wentz #GOD #AO1

Praying for you @cj_wentz get well soon my man!!

At 11-2, Philadelphia has the best record in the NFC and are poised to get the No. 1 seed for the playoffs.

Prior to the game, Wentz shared on his Instagram stories page, his practice cleats with a logo of his foundation, AO1 (Audience of One) and a drawing of the nativity scene from Luke 2:11. 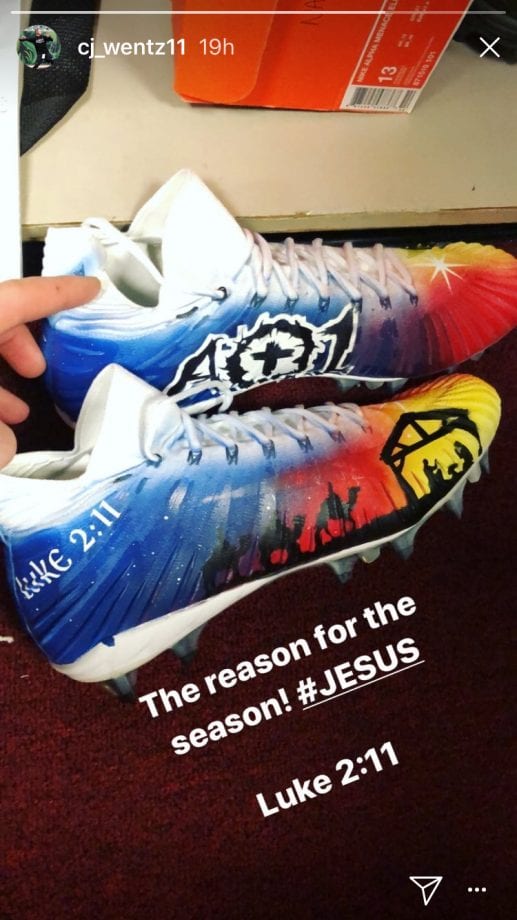