The following article is featured in the latest edition of Sports Spectrum. To get a full subscription to the magazine, including its online content, click here to subscribe.

A ‘weird injury’ derailed David Johnson’s season, but the NFL’s most versatile player found God calling him to lead even when he couldn’t play

Three yards from scoring his first touchdown of 2017, a year ripe with weighty expectations, David Johnson absorbed the force of a 207-pound safety running full speed and shoulder first. The running back made the catch and held on to the ball, but the air immediately left his lungs upon impact. Johnson writhed on the ground before heading to the sideline.

His backup punched it in on the next play, giving Arizona a 17-9 lead over Detroit with 5:37 left in the third quarter of their Week 1 matchup. While the Lions’ next drive stalled after four plays, Johnson found his breath again. He felt fine, so he went back out for the Cardinals’ ensuing series, and his number was called on the first play — handoff around the left end. But after five yards, he knew something wasn’t right.

“I didn’t realize my wrist was feeling weird until I caught my wind and I went in to the next series,” Johnson said on the Sports Spectrum Podcast in early October. “I was running with the ball and it just didn’t feel like I was securing the ball well enough. I ended up actually fumbling, and that’s when I really realized that there was something up.

“After going in and getting the X-ray, they saw something was fishy with the wrist. Actually, going into the locker room, I thought it was just a sprained wrist and that I’d be able to tape it up and get back on the field. I thought I was going to be able to keep playing … but unfortunately it was a scapholunate tear and I had to get it repaired.”

In layman’s terms, Johnson dislocated his wrist. Surgery was needed. The initial reports stated he’d be out 12 weeks, but Johnson said there really wasn’t a timetable. It simply depended on how his wrist responded to rehab.

Just like that, a year boasting the potential to be one of the greatest in NFL history became shrouded in doubt. 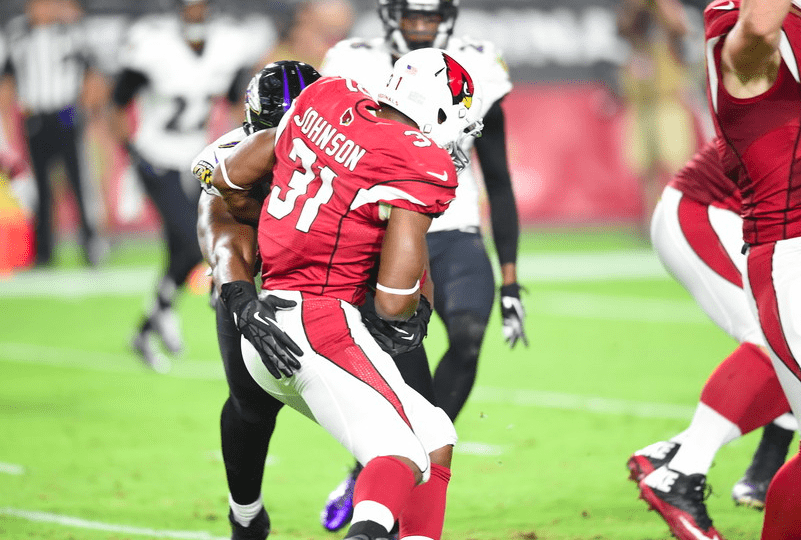 A third-round draft pick in 2015 out of Northern Iowa, Johnson found success with the Cards right away. He started only five games as a rookie, but scored 12 touchdowns (eight rushing, four receiving) in helping Arizona reach the NFC championship game.

He upped that to a league-best 20 TDs in 2016, collecting Pro Bowl and first-team All-Pro honors in the process, while also becoming the first player in NFL history to record 100 yards from scrimmage in the first 15 games of a season. He might have made it 16 had he not sprained a knee in the Cardinals’ season finale. Still, he finished with 1,239 rushing yards and 879 receiving yards, totaling a league-leading 2,118 yards from scrimmage.

The most versatile player in the NFL then set his sights for 2017 on 1,000 yards rushing and 1,000 yards receiving, to join only Roger Craig (1989) and Marshall Faulk (1999) in doing so. Cardinals head coach Bruce Arians was even willing to give Johnson 30 touches a game. Hence, he was featured on one of four regional covers for Sports Illustrated‘s 2017 NFL preview issue, and fantasy football owners everywhere made him the consensus No. 1 overall pick.

Then Week 1 happened — dislocated wrist. “A weird injury and it’s really not a common injury in football,” Johnson says. So much for joining Craig and Faulk. So much for the intense knee rehab to be ready for all offseason workouts. So much for helping the Cardinals rebound from the 7-8-1 disappointment of last season. The 25-year-old knows the window of opportunity with Arizona’s current roster is narrow, as quarterback Carson Palmer is 37 and receiver Larry Fitzgerald 34.

Yet, as a man rooted in his faith, he never questioned God. He says he never grew angry over the frustrating turn of events for a season brimming with hope. “I’m blessed and I thank God for giving me this platform, for giving me this ability and the skill to play in the league,” Johnson says.

Despite the unwanted downtime, he’s able to find blessings in disguise. For instance, he’s able to dig into more of the Bible because he’s not constantly studying a playbook. He and his wife, Meghan, were given a study guide focused on the story of Zechariah and Elizabeth, the parents of John the Baptist. “I’m able to actually be there and learn, read more into the Bible and go further along in the study guide with my wife,” Johnson says.

So he’s doing what he can to add value off the field. If all he can do is help coach, that’s what he’ll do. He actually feels he’s being called to lead.

They may be uncomfortable, but those leadership opportunities are not unfamiliar. 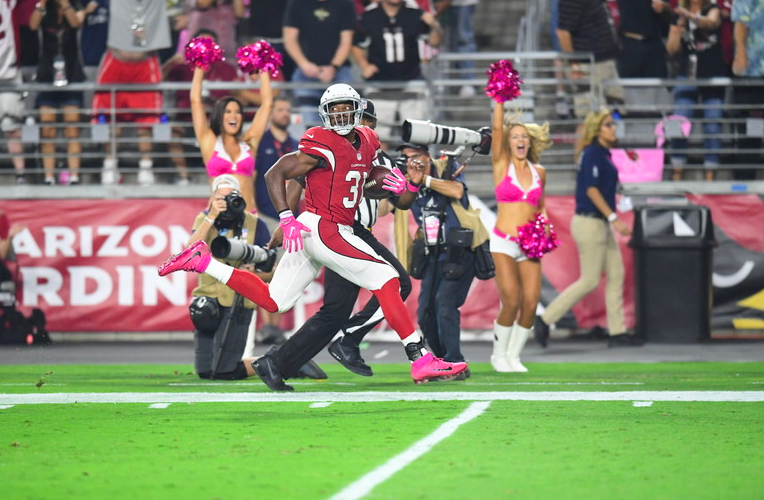 Johnson wasn’t the first player drafted out of UNI — an NCAA Division I-AA/FCS school since 1981 — and he won’t be the last. But the school is no football factory. That’s partly why his rapid rise to stardom in the NFL was so surprising. One scout’s take before the 2015 NFL Draft said, “Johnson lacks the short-area quickness to be a consistently effective every-down running back.” Translation: No one was predicting All-Pro status after two years. But Johnson is a grinder.

“College life for me was way different than what I hear from other players,” he says. “… I had a summer job doing weird things with asbestos removal and then I fortunately ended up going to dorm duty, where we were maintenance guys and we’d clean up the dorms. We’d fix the dressers, fix the windows, fix the drains and everything.

“So that’s the stuff I had to do in the summer where I think other college student-athletes, they were able to just work out. I had to do a job and I had to work out at the same time, so I think that’s really where I learned how to have my work ethic.”

Incorporated into many of those summer days were also Bible studies, as Johnson faithfully attended groups led by the Fellowship of Christian Athletes area representative, Ken Trautmann. Monday night meetings were open to any UNI student, and Wednesday nights were for the football team. “David was just faithful to come almost every Wednesday,” Trautmann says. “But he was quiet, really quiet.”

Johnson knew about God and went to church as a kid in Clinton, Iowa, but found himself more consumed with sports, school and life. It wasn’t until his sophomore year of college that he really began studying the Bible, “really focusing in on what God has done, what Jesus has done for us and learning more about Him, and really letting God take my life.”

Often, Johnson would stick around after the meetings to talk one-on-one with Trautmann. By the end of Johnson’s junior year, Trautmann could see fruit from those discussions; Johnson was really grasping the Gospel. Prior to his senior season, Johnson approached Trautmann about being more of a leader. Trautmann was happy to oblige.

“I teach a Bible study for maybe 10-20 minutes,” Trautmann says, “and then we would break up into small groups. And so one thing David would do is he would lead small groups; he’d lead a breakout small group. He would (also) go out to other FCA groups and share his faith. He would be one of the guys I’d ask to go out and share; there were other FCA groups that would ask for athletes to come and share, and so he’d do that.”

Johnson says of Trautmann, “He’s the one who really has molded me into learning more about God and stepping over the faith line.”

It’s a line Johnson still finds himself struggling to cross. As God leads him into leadership roles with the Cardinals, Johnson’s natural instinct is to resist and remain quiet. But to follow the Lord is to step out of comfort zones. “I’ve always been a leader as far as leading by example,” Johnson says. “But my biggest thing that I have to learn is how to speak to the players, the younger guys and how to lead a team that way.”

Trautmann has no doubts Johnson will learn to lead the Cardinals well. Trautmann’s wife, Lynn, who helps lead FCA groups at Northern Iowa — and loved sending Johnson home with leftover food because about all he would make for himself were peanut butter sandwiches — couldn’t agree more.

“He was a guy that really had a heart for Christ. He wasn’t a partier, he wasn’t anybody who was doing that kind of stuff,” Lynn says. “I think when David speaks people will listen because he lives it out.”

Before long, Johnson figures to be among the veterans looked up to on the Cardinals. As he watched and learned from seasoned pros like Fitzgerald and Andre Ellington, Johnson aspires to be that guy for others. He can share about his struggles to adjust to “adult” life, as is common to many young believers.

“Spiritually it was actually pretty tough just because when I came in as a rookie, it was a whole new change for me,” Johnson says. “I didn’t have the normal (routine) where I’d go and talk to my Bible group leader, Ken Trautmann. I didn’t have people that I normally could go and talk to about the Bible … I felt like my rookie year I might have slipped off my spiritual trail for a little bit, but I was able to talk to Ken, talk to my wife and regain that strength in God.”

Some Arizona teammates have helped sharpen Johnson as well. He’s a regular at the players-only Bible studies during training camp, led by quarterback Drew Stanton with help from Anthony Edwards, the Cardinals’ senior director of player development who is also a pastor. The group builds throughout the season on what was discussed during camp.