The year 2018 is turning out to be pretty good for Nick Foles.

First, he played the game of his life in Super Bowl LII, helping the Eagles capture their first championship, beating the defending champion Patriots 41-33 and earning Most Valuable Player honors.

Second, he got to celebrate by going to Walt Disney World and appearing on shows like the Jimmy Kimmel Show and The Ellen Show.

Now, it’s time to write the book on how it all happened. 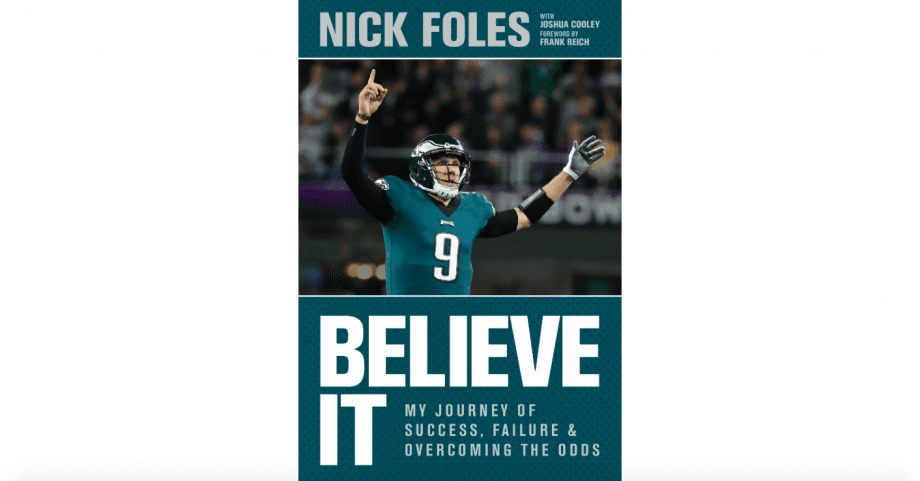 Tyndale Momentum announced Wednesday it has agreed to work with Foles on his book, “Believe It: My Journey of Success, Failure and Overcoming the Odds.” Available for purchase June 26, the Super Bowl MVP says he’s excited to have his story featured in a book.

“I really didn’t expect to be writing a book at this point in my life,” Foles said in a press release from Tyndale, “but I’m excited about the opportunity to tell my story and share my faith. Ever since the Super Bowl, people have been wanting to hear about how we got there and what it was like, which is a big part of the story, but I also want to be transparent about the struggles I’ve gone through in my life and my career. There’s so much pressure right now — especially with social media — to always look like we’re perfect, but we’re not. At least I’m not, and I think it’s important to be open and honest about that, because it’s in those moments of weakness when we grow the most.”

Foles says he’ll donate 100 percent of his proceeds from the book to Christian charities and humanitarian causes around the world.

“Besides the opportunity to tell my story, I’m excited about being able to help some people in need through this project. When we were approached about writing a book, Tori and I prayed about it and decided that, if we do this, we want all the money to go to charities and ministries all around the world. And who better to do that with than Tyndale?”

Frank Reich, the former offensive coordinator with the Eagles and current Indianapolis Colts head coach, will write the foreword.

The book releases everywhere June 26. You can pre-order your copy now.

RELATED ARTICLES:
– Trey Burton: Thank you Philly, it was “Special”
– Eagles QB Nick Foles wants to be a pastor whenever he’s done with football
– NEW PODCAST: A conversation with the Super Bowl Champion Philadelphia Eagles