MAGAZINE: Preach It, Dabo Swinney — Clemson's coach is unashamed of the Gospel

This story appears in the Fall 2018 issue of Sports Spectrum Magazine. For more in-depth feature stories like this, subscribe to our quarterly magazine for only $18. 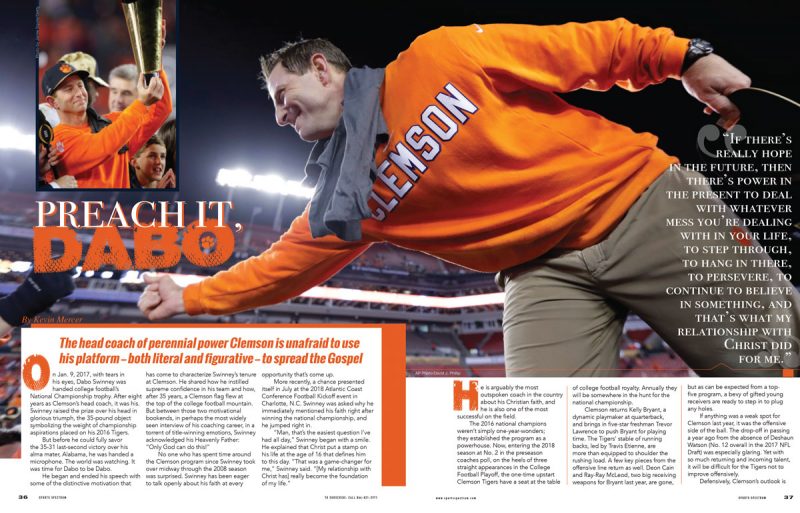 On Jan. 9, 2017, with tears in his eyes, Dabo Swinney was handed college football’s National Championship trophy. After eight years as Clemson’s head coach, it was his. Swinney raised the prize over his head in glorious triumph, the 35-pound object symbolizing the weight of championship aspirations placed on his 2016 Tigers.

But before he could fully savor the 35-31 last-second victory over his alma mater, Alabama, he was handed a microphone. The world was watching. It was time for Dabo to be Dabo.

He began and ended his speech with some of the distinctive motivation that has come to characterize Swinney’s tenure at Clemson. He shared how he instilled supreme confidence in his team and how, after 35 years, a Clemson flag flew at the top of the college football mountain. But between those two motivational bookends, in perhaps the most widely seen interview of his coaching career, in a torrent of title-winning emotions, Swinney acknowledged his Heavenly Father:

No one who has spent time around the Clemson program since Swinney took over midway through the 2008 season was surprised. Swinney has been eager to talk openly about his faith at every opportunity that’s come up.

More recently, a chance presented itself in July at the 2018 Atlantic Coast Conference Football Kickoff event in Charlotte, N.C. Swinney was asked why he immediately mentioned his faith right after winning the national championship, and he jumped right in.

“Man, that’s the easiest question I’ve had all day,” Swinney began with a smile. He explained that Christ put a stamp on his life at the age of 16 that defines him to this day. “That was a game-changer for me,” Swinney said. “[My relationship with Christ has] really become the foundation of my life.”

“If there’s really hope in the future, then there’s power in the present to deal with whatever mess you’re dealing with in your life, to step through, to hang in there, to persevere, to continue to believe in something, and that’s what my relationship with Christ did for me.” — Dabo Swinney

He is arguably the most outspoken coach in the country about his Christian faith, and he is also one of the most successful on the field.

The 2016 national champions weren’t simply one-year-wonders; they established the program as a powerhouse. Now, entering the 2018 season at No. 2 in the preseason coaches poll, on the heels of three straight appearances in the College Football Playoff, the one-time upstart Clemson Tigers have a seat at the table of college football royalty. Annually they will be somewhere in the hunt for the national championship.

Clemson returns Kelly Bryant, a dynamic playmaker at quarterback, and brings in five-star freshman Trevor Lawrence to push Bryant for playing time. The Tigers’ stable of running backs, led by Travis Etienne, are more than equipped to shoulder the rushing load. A few key pieces from the offensive line return as well. Deon Cain and Ray-Ray McLeod, two big receiving weapons for Bryant last year, are gone, but as can be expected from a top-five program, a bevy of gifted young receivers are ready to step in to plug any holes.

If anything was a weak spot for Clemson last year, it was the offensive side of the ball. The drop-off in passing a year ago from the absence of Deshaun Watson (No. 12 overall in the 2017 NFL Draft) was especially glaring. Yet with so much returning and incoming talent, it will be difficult for the Tigers not to improve offensively.

Defensively, Clemson’s outlook is blindingly bright. The Tigers’ national championship hopes received a colossal boost when defensive end Austin Bryant and tackle Christian Wilkins decided to return. Those two — along with DT Dexter Lawrence and DE Clelin Ferrell — will star on a line that is both very talented and very deep. It’s not a stretch to say Clemson’s 2018 defensive line could be one of the best ever assembled.

The Tigers’ linebacker core and secondary have been overshadowed this offseason by the defensive front, but both are strong in their own right. The losses of linebacker Dorian O’Daniel, cornerback Ryan Carter and safety Van Smith are noteworthy, but Swinney and defensive coordinator Brent Venables should have little trouble finding talented replacements waiting in the wings.

The schedule shakes out favorably for Clemson as well, as it will play only one team — Florida State — in ESPN’s preseason top 25. The Tigers are slated to be favored significantly in every matchup this season; they open at home Sept. 1 against Furman.

Ohio State, Georgia and Alabama may have something to say about it, but the 2018 Clemson Tigers seem poised to give Swinney a second dose of what he tasted in 2016. With Swinney’s infectious personality and perpetual optimism, it’s tough for any Clemson fan not to smile right now too. 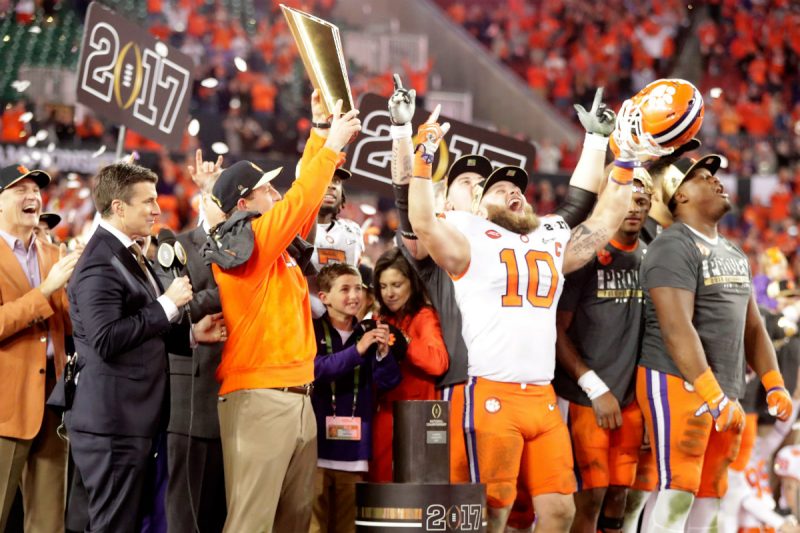 Things weren’t always so upbeat around the Clemson program. Under Swinney’s predecessors, many viewed the Tigers as perennial underachievers. Clemson often was a world-beater on paper, but rarely lived up to the hype once the season began. Yet under Swinney, those days seem like the distant past.

Swinney has changed the culture around the football program in Clemson, S.C. His teams are always distinguished by a sense of absolute togetherness and inner self-confidence. Even when the outlook is bleak, the Tigers never quit, never stop clawing until the final whistle. The Tigers have come to embody the qualities of their head coach, and their head coach holds fast to Christ.

“Swinney’s Sermon,” as some are calling it, at the ACC Football Kickoff is a prime example.

“Everybody sees me now and I’m the head coach at Clemson and this and that, but my life hasn’t always been this way,” Swinney said. “If there’s really hope in the future, then there’s power in the present to deal with whatever mess you’re dealing with in your life, to step through, to hang in there, to persevere, to continue to believe in something, and that’s what my relationship with Christ did for me.”

Swinney explained that Jeremiah 29:11 has resonated with him throughout his life. It says, “‘For I know the plans I have for you,’ declares the Lord, ‘plans to prosper you and not to harm you, plans to give you hope and a future.’”

Passages like this give Swinney the strength to outlast any obstacle he faces in life, like how his team outlasts so many opponents in the fourth quarter. It gives him hope in the face of hopelessness, just like what his team had in their national championship game victory when they trailed 14-0.

Still, Swinney is not naïve. He knows bad things happen to people every day, Christian and non-Christian alike.

“Life is hard, and we’re all going to experience death and failure and setbacks and disappointments and cancer,” Swinney said. “It’s just a really difficult world.”

But the coach doesn’t let pain have the final say. Instead, the peace of God, the grace He offers and the hope of the inevitable return of Jesus are where Swinney places his trust. It’s what gets him out of bed in the morning and keeps him working hard for the glory of God.

That hard work has translated into success in his role as head coach. Despite Clemson being his only head coaching job, Swinney has amassed an impressive resume. It includes bowl appearances every season, four ACC championships, three playoff appearances, and the national championship, all to go along with numerous Coach of the Year awards.

However, Swinney measures his success not by the standards of this world but by the eternal standards of God.

“Probably the greatest accomplishment that I have had to this point is to see my three sons come to know Christ and to know Him as their Lord and Savior,” Swinney said as he concluded his response at the ACC Kickoff. “Those are personal decisions that people have to make, but [this is] just how I choose to live my life.

“Trust me, people that know me know I ain’t perfect, but I do try to live my life in a way that hopefully can be pleasing to my Maker. I know I’m going to meet Him one day, and He’s not going to pat me on the back and talk about how many wins I had or how many Coach of the Year trophies we got or how much money I made. I really think He’s going to hold me accountable to how I took advantage of the opportunity and the blessings that He gave me, the impact that I had on young people, the type of men that we develop through a game.”

For Swinney, even surrounded every day with a game as ruthless as football, the love of Christ must win. Ultimately, it will.

Swinney said it best a few years ago — also publicly, in another “sermon” in front of the media.

“It just says love your neighbor as you’d love yourself.”

This story appears in the Fall 2018 issue of Sports Spectrum Magazine. For more in-depth feature stories like this, subscribe to our quarterly magazine for only $18.