It’s Wednesday morning in Hudsonville, Mich. For Ethan Abberger, that means getting up at 6:15, putting on his No. 5 jersey, getting his work together and grabbing his backpack. It also means making sure he doesn’t forget his Bible. That’s because for Ethan, Wednesdays also mean he gets to lead a Bible study with fellow students at Baldwin Middle School.

Ethan is a seventh-grader and a standout wide receiver for the middle school team. His father, Dave, is a former Arena Football League quarterback turned pastor and moved back to Michigan from Memphis, Tenn., in July to plant a new church. Upon Ethan arriving at the school for orientation, a teacher mentioned to the students that he allows a Bible study to be held in his classroom each week at 7:15 a.m.

Bible study before school was something both Ethan and his little brother, Evan, wanted to attend. As they went to sign up, Ethan saw that there wasn’t anyone who had agreed to lead the study on that first morning. So the seventh-grade wide receiver for the Eagles jumped on the opportunity.

Ethan grabbed his Bible, began to seek out what he would speak on, and came to the book of Job.

“Ethan taught on Job and the tribulations he went through,” his father, Dave Abberger, said. “He told his classmates that whatever trials come their way and difficulties are presented, they have to always trust God. He also mentioned that Job had a testimony to his friends because he never blamed God or walked away from his faith in God.”

Ethan’s teacher said he faced a lot of difficulty from local groups in the area attempting to close down the Bible study completely, and asked the Abberger family to pray that God would allow them to continue holding the voluntary study before school.

1 Peter 3:15 says: “Always be prepared to give an answer to everyone who asks you to give the reason for the hope that you have. But do this with gentleness and respect.”

That’s the approach Ethan has taken both in the Bible study and with his football team. Voluntarily, he invites his teammates to take a knee and pray with him before each of his football games.

“God is using his testimony to impact his classmates and those in our community,” Dave Abberger said. “We are glad that he is a top notch football player and that local varsity coaches are taking notice of him. However, we are most encouraged by his love for God and his family.” 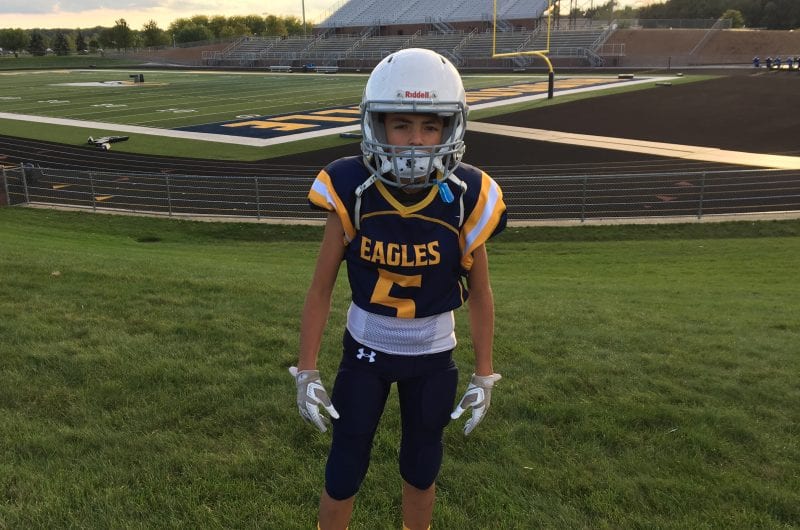 Ethan has two brothers (Evan, 13, and Hudson, 2) and a sister (Mia, 8). He says he understands that there will always be people who try to push back on him sharing his faith, but he tells his father, “Dad, how can I deny God if He was willing to die on the cross for me in front of everybody?”

Two of Ethan’s football heroes are also men of faith: Carson Wentz of the Philadelphia Eagles and Kirk Cousins of the Minnesota Vikings. Both quarterbacks are very outspoken about their faith and frequently share on social media their love of Jesus.

For Ethan Abberger, he hopes to one day have a platform like Wentz and Cousins to share his faith. But for now, he’s doing just fine impacting lives as a 13-year-old seventh-grader in Hudsonville, Mich.

“For I am not ashamed of the Gospel, because it is the power of God that brings salvation to everyone who believes: first to the Jew, then to the Gentile.” — Romans 1:16