By Jon Ackerman May 21, 2019
Case and Kimberly Keenum attend the 2018 NFL Honors (Photo by Jeff Lewis/Invision for NFL/AP Images)

Quarterback Case Keenum, who was traded in March from the Denver Broncos to the Washington Redskins, is about to become a father. His wife, Kimberly, announced with an Instagram post on Sunday that they are expecting their first child. The gender, a boy, was revealed after Case threw a football through a black balloon, which exploded with blue powder. 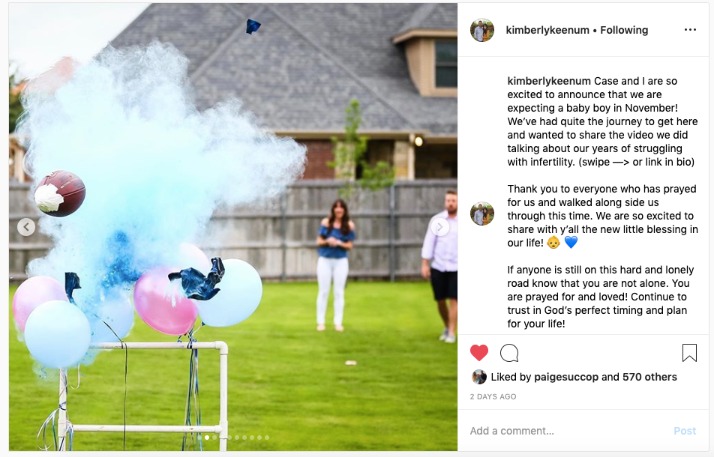 “Case and I are so excited to announce that we are expecting a baby boy in November!” Kimberly wrote. “We’ve had quite the journey to get here and wanted to share the video we did talking about our years of struggling with infertility.”

The video was a part of Football Sunday 2019, which is powered by The Increase and produced by Sports Spectrum in partnership with Floodgate Productions:

“Over the course of a few bumps in the road, some different procedures, some different things that we’ve had to go through, we’re still praying that God’s plan has children for us,” Case said in the video, which was shot during the 2018 NFL season.

“Having kids is not going to give me this ultimate happiness,” Kimberly said in the video. “Yes, it’s going to be so joyful and amazing and I cannot wait for, hopefully, the Lord to provide that in our lives. But I still feel like He’s just teaching us so much to find the ultimate joy in Him and in Him alone. And just peace in Him. I feel like the Lord has us in this time to be able to have extra time to pour into other people.”

The Keenums have certainly poured into others. Both have been active Bible study and small group leaders within the organizations they’ve been a part of, and have felt that God leading them to numerous teams has allowed them to reach more people with God’s Word. Washington is Case’s fourth team in the past four years, and his fifth team overall since entering the NFL as an undrafted free agent with Houston in 2012. He is battling rookie Dwayne Haskins for the starting QB job in Washington, and Colt McCoy and Alex Smith will enter the competition when/if they return from leg injuries.

But the Keenums’ life off the field takes precedence over Case’s game on the field. Their struggle with infertility has come to an end, but Kimberly still wants to be there for women who may endure similar struggles.

“So many women do feel shame and do struggle with it so much — and go through a lot more than what we’ve been through,” she said in Football Sunday. “… I understand, it stinks. But God has purpose no matter where we’re at in our life.”

Kimberly added on Instagram, “Thank you to everyone who has prayed for us and walked along side us through this time. We are so excited to share with y’all the new little blessing in our life!

“If anyone is still on this hard and lonely road know that you are not alone. You are prayed for and loved! Continue to trust in God’s perfect timing and plan for your life!”