For Western Michigan quarterback Jon Wassink, the day never stops. In fact, some wonder why or how he does it all. After all, most college kids don’t go to grad school, volunteer for more than six organizations and start at quarterback for the football team. But Wassink is different, a man who lives out his faith every single day.

The word “leader” is often used to describe great, respected, honored people, and Wassink is one of them. In fact, he’s leading nearly everywhere he goes.

On the gridiron, he’s the one his teammates have looked to in “make-it or break-it” situations, when the game is on the line and the team needs a fourth-down conversion to keep its quest for victory alive. He’s the guy the coaches have relied on to keep the offense in tune, executing every play, and setting an example of hard work in practice. He’s the player fans have looked to in guiding their beloved Broncos for much of the past three seasons.

Wassink played his final game for WMU on Monday in the First Responder Bowl in Dallas. He led his squad to a 17-10 lead over Western Kentucky entering the fourth quarter, but the Broncos ultimately fell 23-20 after a last-second WKU field goal. Wassink closed his collegiate career with 193 yards passing, one touchdown and one interception in the game.

His impact on the field will be missed, but maybe even more so off the field.

Ups and downs at Western Michigan

Just a few years ago, Wassink was relatively unknown outside of the state of Michigan. A star basketball and football player at South Christian High in Grand Rapids, Mich., he was a three-star football recruit. But when it came time to play at the next level, he turned down offers from both Michigan and Michigan State, instead electing to make the 50-mile trip to Kalamazoo and suit up for Western Michigan, then a program on the rise.

But once he was there, things didn’t go as planned. In his freshman year of 2015, he redshirted, only getting to practice but not play in any games. Redshirting is typical for many freshman quarterbacks. But he again didn’t see the field the following season, this time being assigned to the scout team, merely helping the starters prepare for that week’s game.

“Those two years were definitely tough,” Wassink says. “Coming out of high school, everybody is their high school’s best player, so redshirting is definitely a transition. It’s hard not getting to be out on the field. But it was part of the journey and I got great joy out of those years as well. I learned a lot and those first two years were just as important to me as the last three, for sure.”

His patience and preparation paid off in the end, as his number was called in 2017. Named the starter and getting to see the field for the first time at the college level, Wassink’s career appeared to be heading in the right direction. He still remembers the adrenaline rush as he took his first collegiate snap: Standing in the Los Angeles Coliseum, a venue that had hosted the Olympics, the Super Bowl and World Series, he took it all in as he led the offense against USC in the season opener.

“For me personally, one of the coolest memories was my first start ever, my first snap ever against USC in Coliseum,” he remembers. “That one was pretty memorable.”

Then came Oct. 21, 2017. After starting eight games, he suffered a broken collarbone, ending his season — and once again setting back his collegiate career. That wouldn’t stop him though, as he underwent intense physical therapy in the months that followed, on a quest to return to the field that next fall and reclaim his position as the Broncos’ starter.

Not only did he return to the field in 2018, but he led WMU to a 5-3 conference record, throwing for 1,994 yards and scoring a total of 22 touchdowns (16 passing, six rushing). But unfortunately, the injury plague struck Wassink once again, this time in the form of a broken foot. His season ended after nine games.

Doing what he did the season before, he got to work in rehab. And he returned for his final season in 2019, seeking his first bowl game victory while at WMU. Determined to make it his best yet, Wassink guided the Broncos to a 7-5 regular-season record — and was still healthy heading into Monday’s bowl game appearance. Unfortunately, the season ended with a tough loss. 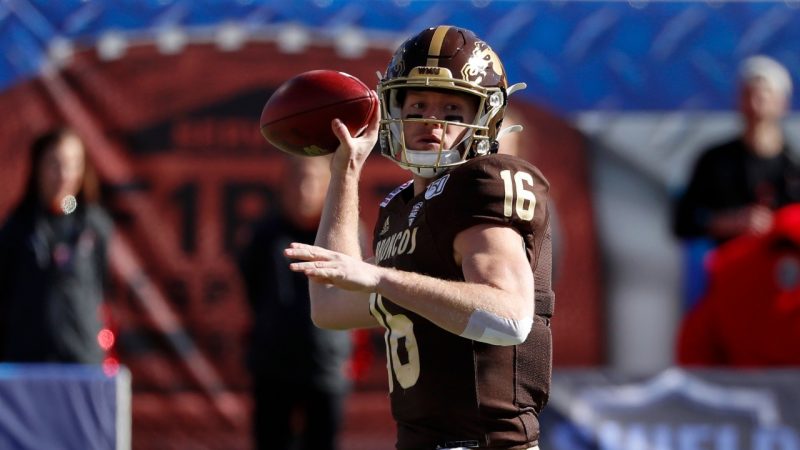 ‘It all stems from my faith in Christ’

However, as much as Wassink’s on-field accomplishments say about him as a football player, it’s what he does off the gridiron that says the most about him as a person, and follower of Christ.

His pay-it-forward mentality — an idea that everything he’s been blessed with is a gift and he wants to make life better for someone else — is what has driven his deep involvement with several different groups of people in the Kalamazoo community. It all goes back to one solid foundation: his faith in the Lord.

That foundation has led to Wassink becoming a consistent participant on team community service projects. He impacts the next generation in a variety of ways, mentoring at Tree of Life ministries, Indian Lake Elementary School and is a regular visitor at the Bronson Children’s Hospital, adding a little bit of light to every child’s day.

Amongst his fellow college students, he does the same exact thing, serving as a WMU FCA leader. Of all his responsibilities, one of the biggest is leading a weekly Bible study. In addition, he’s also a volunteer with Uplifting Athletes, a unique organization of college football players which benefits those with rare diseases such as kidney cancer, cystic fibrosis and others.

In 2016, Wassink was a part of a mission trip that traveled to the Dominican Republic, repairing and rebuilding infrastructure for a small community whose population was around 100. Furthermore, he’s participated in helping feed the homeless in Kalamazoo, an area where the homeless population is around 500 people.

Because he helps out and volunteers in so many ways, coupled with his play on the field and impressive 3.95 GPA in graduate school, Wassink was selected as the 2019 Wuerffel Trophy recipient on Dec. 10. What’s special about winning this particular award is that it is given to the country’s best well-rounded player, a guy who sets a positive example in his community, works hard in the classroom and has talent on the field. For Wassink, it’s an honor he’ll never forget.

“I’m very thankful for the award, for everyone who has helped me and allowed me to do these things,” he said after Saturday’s practice. “I’m honored to be able to represent my team and my family.”

However, he doesn’t take the credit for himself.

“It’s really a team effort. Going out into the community, we do a lot of stuff as a team. The same thing goes for school and football. You can’t be a successful individual out on the field unless you have good teammates and good coaches,” he says.

When Wassink led his team into Gerald J. Ford Stadium on Monday, it signaled the end of an accomplished college career both on and off the field for the Bronco quarterback. However, God’s plan continues to unfold for his life ahead. He’s getting married on January 10, and is then expected by many scouts to make a run at the NFL. Wherever life takes him, he’ll be living out his faith and changing lives along the way.

“God’s given me this opportunity,” he says, “and I’m going to go take advantage of it.”