The Tigers had finally taken down Central Florida, a program with which they had battled more than once for the American Athletic Conference title, and lost to 13 straight times. It was a full-blown rivalry, and Memphis had stormed back from 21 points down in this game Oct. 17, snatching a victory from the Knights in overtime.

On the final play of this closely-contested, 50-49 showdown, UCF’s Daniel Obarski came on to kick a potential game-winning field goal … and missed wide left.

On one sideline stood Patterson, taking in the moment, enjoying what will go down as one of the highlights of his senior season. On the other stood Obarski, who, in the heat of the moment, threw his helmet at a fellow teammate. Patterson understood. He had been in that situation more than once before. Sure, he handled that disappointment differently, but it was a prime example of the nature of being a kicker.

One week, you are the hero. The next, you are being bashed on social media by fans, even fellow teammates. It is a pressure-filled job, often unnoticed until a mistake occurs.

Patterson knows this. He has experienced it first-hand. But what has kept Patterson on level ground is a strong faith in Christ, which has been continually built from his high school years.

“Fortunately or unfortunately, I’ve been in both situations, helping the team win, then helping them lose,” Patterson recently told Sports Spectrum. “Having a constant relationship with God, that’s the salvation that I have. Football is not the biggest thing in my life. It may seem like that from your friends and from your family, but there is a much greater purpose that I have in my life than just being a kicker.”

“Having a constant relationship with God, that’s the salvation that I have. Football is not the biggest thing in my life.” — Memphis kicker Riley Patterson

In high school, Patterson rarely missed a field goal or PAT attempt. In fact, over four years as the kicker and punter for Edwardsville (Ill.) High School, he was 81 of 91 on PATs and 13 of 17 on field goals. He was the nation’s fourth-ranked kicker in the class of 2017 by Kohl’s Kicking and Punting. But he still felt a wide gap. That’s when he found his faith.

“It was back in high school for me,” Patterson remembers of how he came to the Lord. “I’m not really sure how it happened. I was in a tough moment, and I was in my bed one night and thinking about how grateful I am for everything. I just started praying and hours passed. I thought of all the little things, all the big things, all the people that God had placed in my life to be successful in things I never even thought of. Spent hours honestly crying and coming to Christ in that moment. That’s where my life kind of changed.

“Once I got to college, after the season, I came in contact with a church, High Point Church, then I came in contact with a small group that, for some reason, I just happened to go to. I met a lot of great Christian people. One was Jeff Jordan. He took me in and discipled me and has been my discipler for the past three years now. I’m so proud of the impact he has had on my life and how he has guided me through life as a Christian man.” 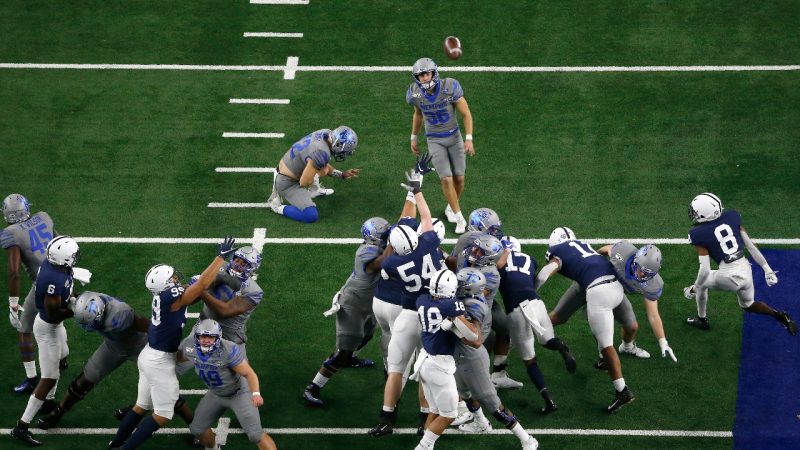 One such thing has been the adversity everyone has faced with what the year 2020 has brought on. For Memphis, the season has not gone as planned. Following a season-opening victory over Arkansas State, the program was shut down for three weeks due to positive COVID-19 cases within the team. Even as recently as this month, the Tigers had their game with Navy postponed due to the virus (originally scheduled for Nov. 14, it will be played at 6 p.m. ET Saturday at Navy-Marine Corps Memorial Stadium in Maryland).

However, with Patterson and quarterback Brady White, who is also a strong Christian, leading this team as seniors, Memphis has stayed the course. It is 3-2 in conference play, 5-2 overall, with a path to the AAC championship game in December. It all starts from a mentality that Patterson spoke of time and time again.

“It’s been a different season than what I was expecting, but we’re making the most of it. I’m really thankful I get to be here. Thankful I get to kick and that God is allowing me to be present where I am and not thinking too far ahead. Just taking it a day and a week, then a month and a year [at a time]. That’s where I am right now, trying to stay present and I think that’s where the majority of the team is as well.”

RELATED STORIES:
— Memphis QB Brady White excels on the field as he plays for ‘an audience of One’
— Colts kicker Rodrigo Blankenship thanked God before game-winning field goal
— From walk-on to starter, Purdue QB Aidan O’Connell seeks to glorify God