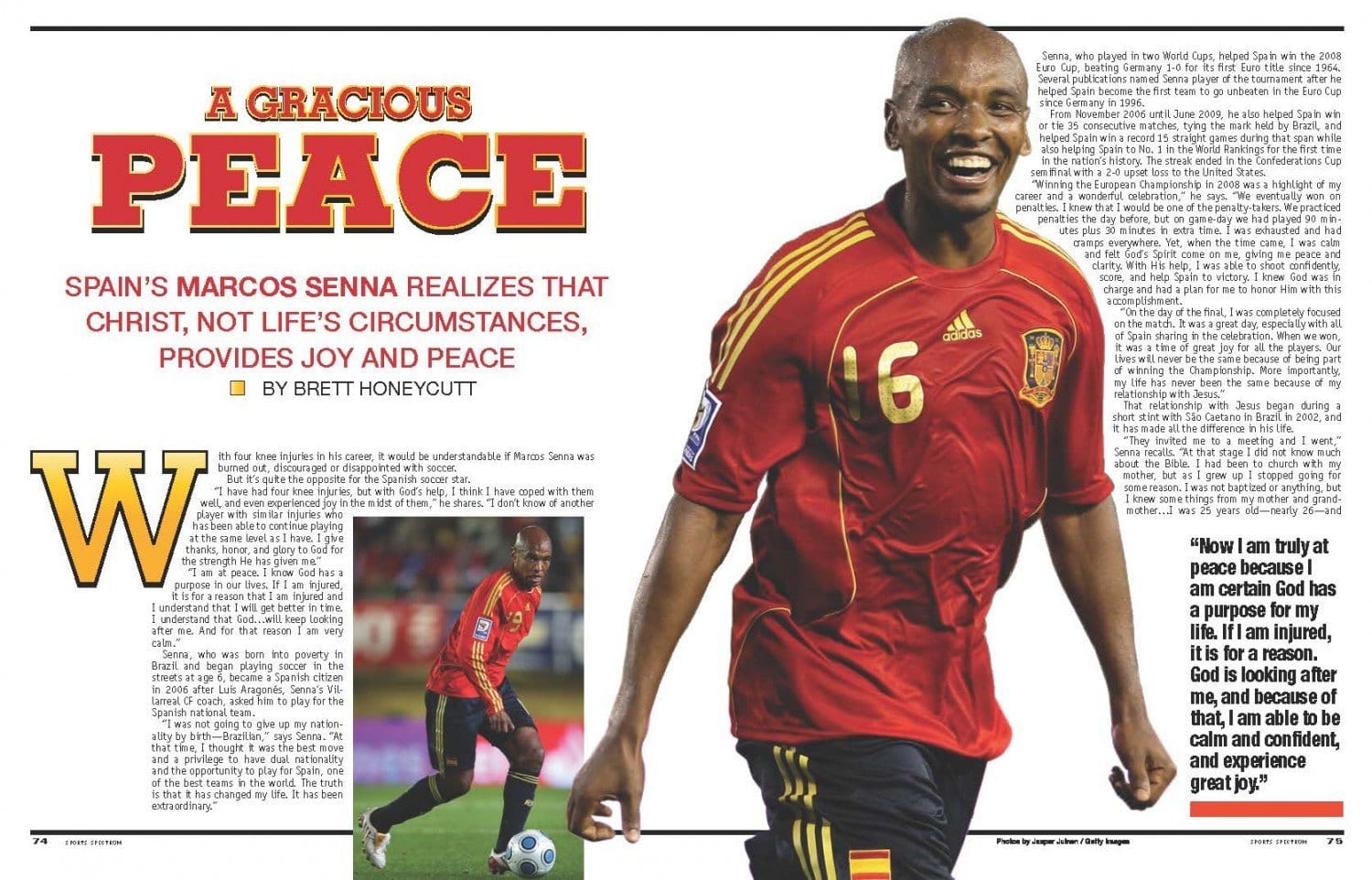 With four knee injuries in his career, it would be understandable if Marcos Senna was burned out, discouraged or disappointed with soccer.

But it’s quite the opposite for the Spanish soccer star.

“I have had four knee injuries, but with God’s help, I think I have coped with them well, and even experienced joy in the midst of them,” he shares. “I don’t know of another player with similar injuries who has been able to continue playing at the same level as I have. I give thanks, honor, and glory to God for the strength He has given me.”

Senna, who was born into poverty in Brazil and began playing soccer in the streets at age 6, became a Spanish citizen in 2006 after Luis Aragonés, Senna’s Villarreal CF coach, asked him to play for the Spanish national team.

“I was not going to give up my nationality by birth—Brazilian,” says Senna. “At that time, I thought it was the best move and a privilege to have dual nationality and the opportunity to play for Spain, one of the best teams in the world. The truth is that it has changed my life. It has been extraordinary.”

Senna, who played in two World Cups, helped Spain win the 2008 Euro Cup, beating Germany 1-0 for its first Euro title since 1964. Several publications named Senna player of the tournament after he helped Spain become the first team to go unbeaten in the Euro Cup since Germany in 1996.

From November 2006 until June 2009, he also helped Spain win or tie 35 consecutive matches, tying the mark held by Brazil, and helped Spain win a record 15 straight games during that span while also helping Spain to No. 1 in the World Rankings for the first time in the nation’s history. The streak ended in the Confederations Cup semifinal with a 2-0 upset loss to the United States.

“Winning the European Championship in 2008 was a highlight of my career and a wonderful celebration,” he says. “We eventually won on penalties. I knew that I would be one of the penalty-takers. We practiced penalties the day before, but on game-day we had played 90 minutes plus 30 minutes in extra time. I was exhausted and had cramps everywhere. Yet, when the time came, I was calm and felt God’s Spirit come on me, giving me peace and clarity. With His help, I was able to shoot confidently, score, and help Spain to victory. I knew God was in charge and had a plan for me to honor Him with this accomplishment.

“On the day of the final, I was completely focused on the match. It was a great day, especially with all of Spain sharing in the celebration. When we won, it was a time of great joy for all the players. Our lives will never be the same because of being part of winning the Championship. More importantly, my life has never been the same because of my relationship with Jesus.”

That relationship with Jesus began during a short stint with São Caetano in Brazil in 2002, and it has made all the difference in his life. 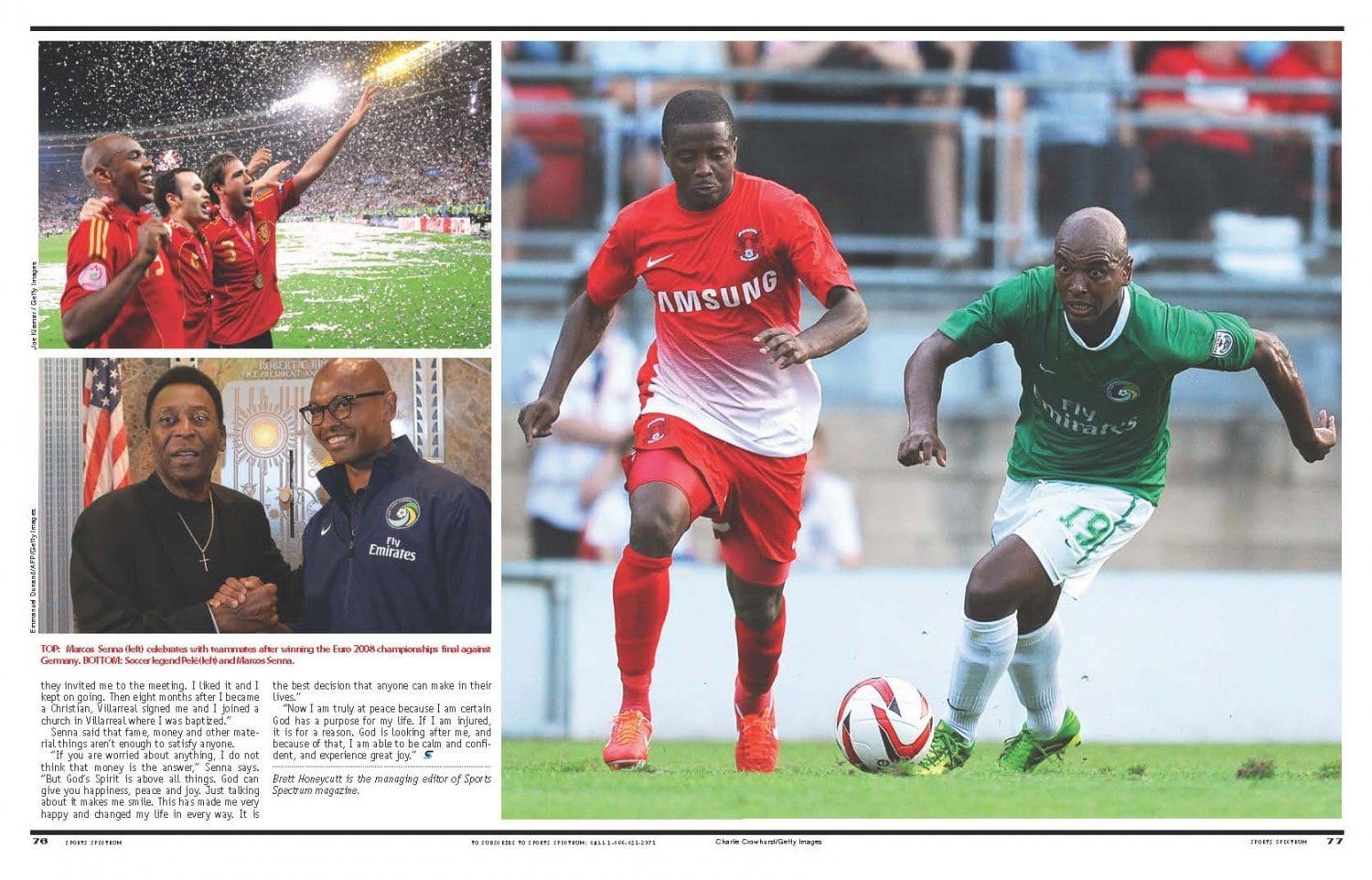 “They invited me to a meeting and I went,” Senna recalls. “At that stage I did not know much about the Bible. I had been to church with my mother, but as I grew up I stopped going for some reason. I was not baptized or anything, but I knew some things from my mother and grandmother…I was 25 years old—nearly 26—and they invited me to the meeting. I liked it and I kept on going. Then eight months after I became a Christian, Villarreal signed me and I joined a church in Villarreal where I was baptized.”

Senna said that fame, money and other material things aren’t enough to satisfy anyone.

“If you are worried about anything, I do not think that money is the answer,” Senna says. “But God’s Spirit is above all things. God can give you happiness, peace and joy. Just talking about it makes me smile. This has made me very happy and changed my life in every way. It is the best decision that anyone can make in their lives.”

“Now I am truly at peace because I am certain God has a purpose for my life. If I am injured, it is for a reason. God is looking after me, and because of that, I am able to be calm and confident, and experience great joy.”