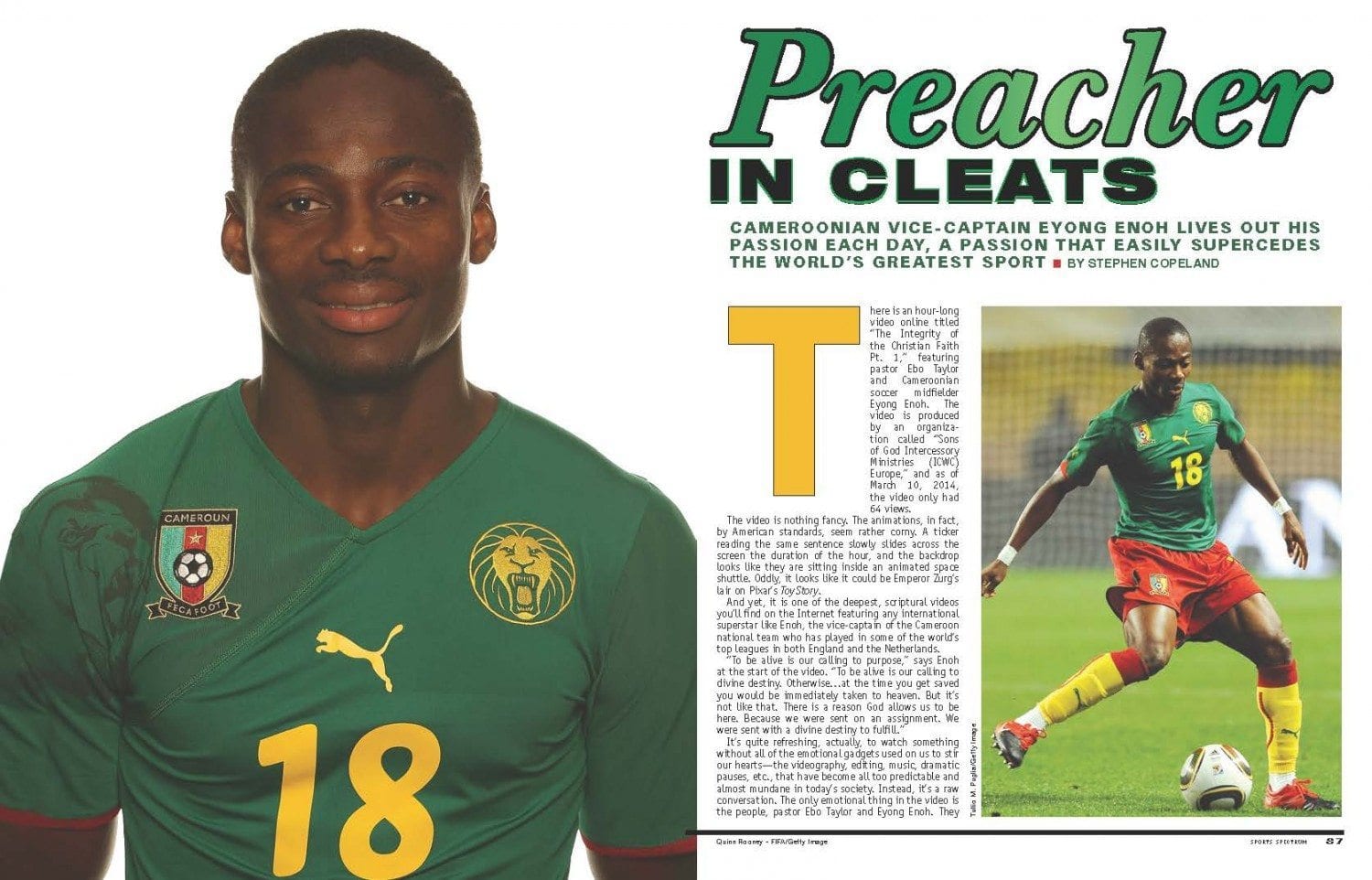 There is an hour-long video online titled “The Integrity of the Christian Faith Pt. 1,” featuring pastor Ebo Taylor and Cameroonian soccer midfielder Eyong Enoh.  The video is produced by an organization called “Sons of God Intercessory Ministries (ICWC) Europe,” and as of March 10, 2014, the video only had 64 views.

The video is nothing fancy. The animations, in fact, by American standards, seem rather corny. A ticker reading the same sentence slowly slides across the screen the duration of the hour, and the backdrop looks like they are sitting inside an animated space shuttle. Oddly, it looks like it could be Emperor Zurg’s lair on Pixar’s Toy Story.

And yet, it is one of the deepest, scriptural videos you’ll find on the Internet featuring any international superstar like Enoh, the vice-captain of the Cameroon national team who has played in some of the world’s top leagues in both England and the Netherlands.

“To be alive is our calling to purpose,” says Enoh at the start of the video. “To be alive is our calling to divine destiny. Otherwise…at the time you get saved you would be immediately taken to heaven. But it’s not like that. There is a reason God allows us to be here. Because we were sent on an assignment. We were sent with a divine destiny to fulfill.”

It’s quite refreshing, actually, to watch something without all of the emotional gadgets used on us to stir our hearts—the videography, editing, music, dramatic pauses, etc., that have become all too predictable and almost mundane in today’s society. Instead, it’s a raw conversation. The only emotional thing in the video is the people, pastor Ebo Taylor and Eyong Enoh. They dive into Isaiah, II Timothy, the Gospels, and yes, even Revelation. They read from the Bible on the edge of their seats (and you can tell because their chairs keep squeaking). Enoh seems much more like an evangelist than a soccer player, preaching at times with the word-frequency of an auctioneer, always quoting Scripture, continually speaking of the Holy Spirit. 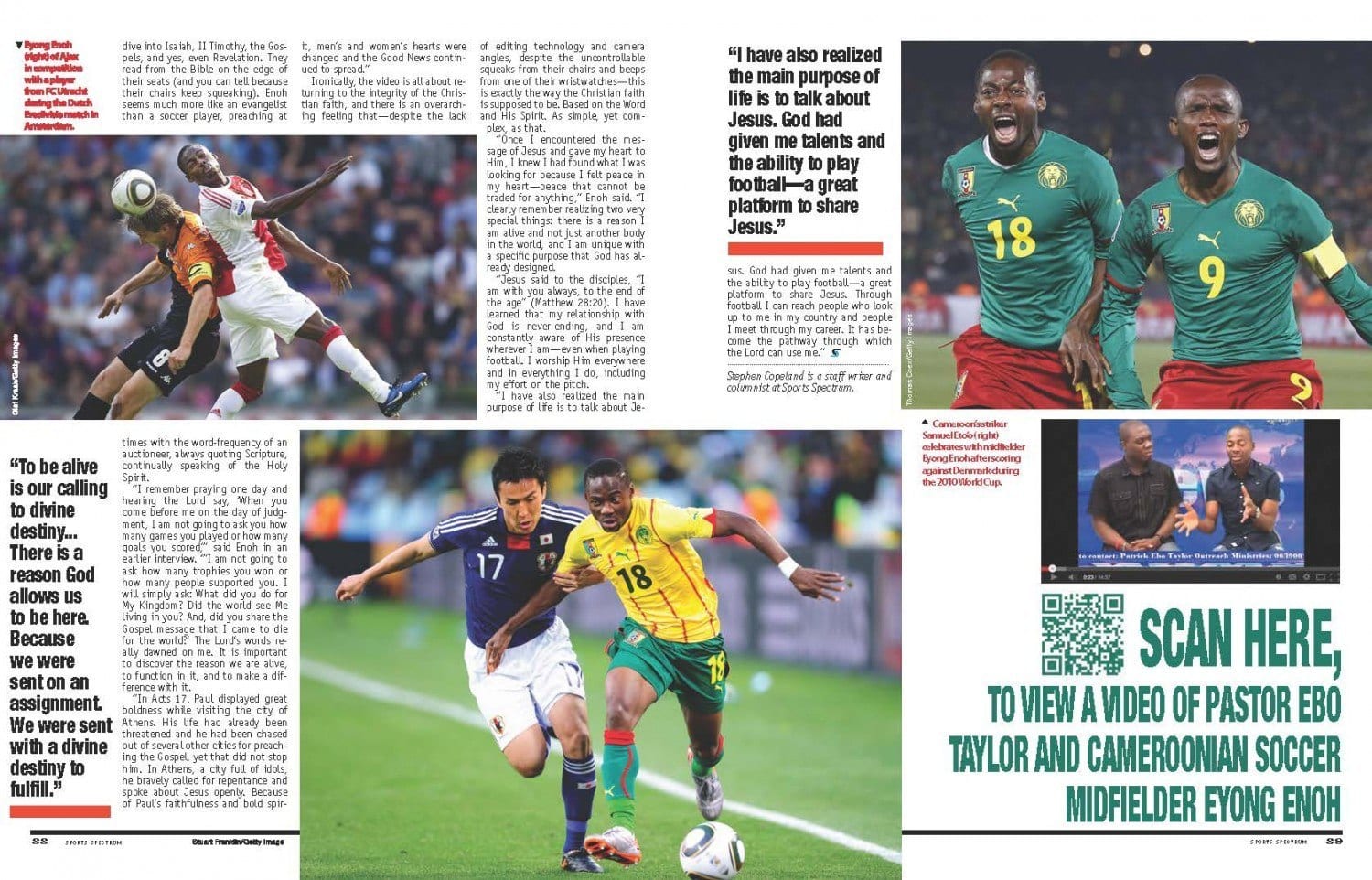 “I remember praying one day and hearing the Lord say, ‘When you come before me on the day of judgment, I am not going to ask you how many games you played or how many goals you scored,’” said Enoh in an earlier interview. “’I am not going to ask how many trophies you won or how many people supported you. I will simply ask: What did you do for My Kingdom? Did the world see Me living in you? And, did you share the Gospel message that I came to die for the world?’ The Lord’s words really dawned on me. It is important to discover the reason we are alive, to function in it, and to make a difference with it.

“In Acts 17, Paul displayed great boldness while visiting the city of Athens. His life had already been threatened and he had been chased out of several other cities for preaching the Gospel, yet that did not stop him. In Athens, a city full of idols, he bravely called for repentance and spoke about Jesus openly. Because of Paul’s faithfulness and bold spirit, men’s and women’s hearts were changed and the Good News continued to spread.”

Ironically, the video is all about returning to the integrity of the Christian faith, and there is an overarching feeling that—despite the lack of editing technology and camera angles, despite the uncontrollable squeaks from their chairs and beeps from one of their wristwatches—this is exactly the way the Christian faith is supposed to be. Based on the Word and His Spirit. As simple, yet complex, as that.

“Once I encountered the message of Jesus and gave my heart to Him, I knew I had found what I was looking for because I felt peace in my heart—peace that cannot be traded for anything,” Enoh said. “I clearly remember realizing two very special things: there is a reason I am alive and not just another body in the world, and I am unique with a specific purpose that God has already designed.

“Jesus said to the disciples, “I am with you always, to the end of the age” (Matthew 28:20). I have learned that my relationship with God is never-ending, and I am constantly aware of His presence wherever I am—even when playing football. I worship Him everywhere and in everything I do, including my effort on the pitch.

“I have also realized the main purpose of life is to talk about Jesus. God had given me talents and the ability to play football—a great platform to share Jesus. Through football I can reach people who look up to me in my country and people I meet through my career. It has become the pathway through which the Lord can use me.”