It’s a cool, Saturday morning in late August at Botetourt Sports Complex in Roanoke, Virginia. Autumn’s approaching hangs in the crisp mountain air. I’m standing near the press box, this sanctuary of mine, as a church softball game unfolds on each of the four surrounding fields. I can hear the music of the games being played—the chatter, the ping of the bat, the cheers. Around the press box, people are hugging, laughing, and talking. I am home.

Scattered throughout all of Roanoke County are 64 teams, heralding mostly from churches all over the Midwest and Southeast. A couple players are even from Alaska. That’s right, for church softball. But as crazy as it all seems, the sight is nothing new. This is what happens every year at the end of August in Roanoke when the Interstate Church of God Softball Tournament comes to town. Churches from all over come together, as one family, to compete in one sport, uniting under one cause: mission work in Paraguay.

The stories are what kept me coming back to this place, year after year, for the last six of seven tournaments. I spent much of my time in the three-story press box beside me, interviewing regular tournament attendees and missionaries who were visiting from Paraguay. Up in that sacred space, I journaled; I wrote poetry; I prayed. The stories met me where I was, in my spiritual doubts and despair, as I was forced to confront my projection of a God who was always disappointed in my spiritual performance. The tournament became something of an annual retreat for me, as it is for many who attend, where I was challenged to transform and to let go, to rest and to be. The stories inspired me on a deep soul- and spirit-level, so much so that I committed to writing a book about my experiences here, moved to be as vulnerable and transparent about my own life as the tournament attendees were who I interviewed there in that press box, as they admitted to me their alcoholism or their failing marriages or their struggles with their faith as they wrestled with tragedy and trauma. The stories compelled me, pulling me south to Paraguay for a week one summer, where I saw firsthand the impact that the tournament was having on that beautiful, beloved country.

When something so mysterious and true as a story pulls you in, the only thing you can do is let it take you wherever it takes you. No matter how obscure it is. I knew little about Paraguay seven years ago but have fallen in love with the country and its people. I have little in common doctrinally with the Church of God, but am moved by the compassionate hearts of those who attended the tournament each year; doctrine suddenly becomes less important when love is clearly the animating force. I have not swung a baseball bat since I was 12 but wrote a book about a softball tournament.

All because of the people.

All because of the stories.

Though the Interstate Church of God Softball Tournament rejuvenates my soul every year, I know that this weekend is going to be especially memorable. That’s because it’s the 40th anniversary of the tournament. Four decades of playing “softball for a reason.”

I worked at Sports Spectrum for five years as a feature writer and columnist where I was honored to cover a number of inspiring stories, but the tournament is by far the finest faith-and-sports connection I’ve seen or covered. As I look around, I am surrounded by stories—stories that I have spent the last half-decade discovering. 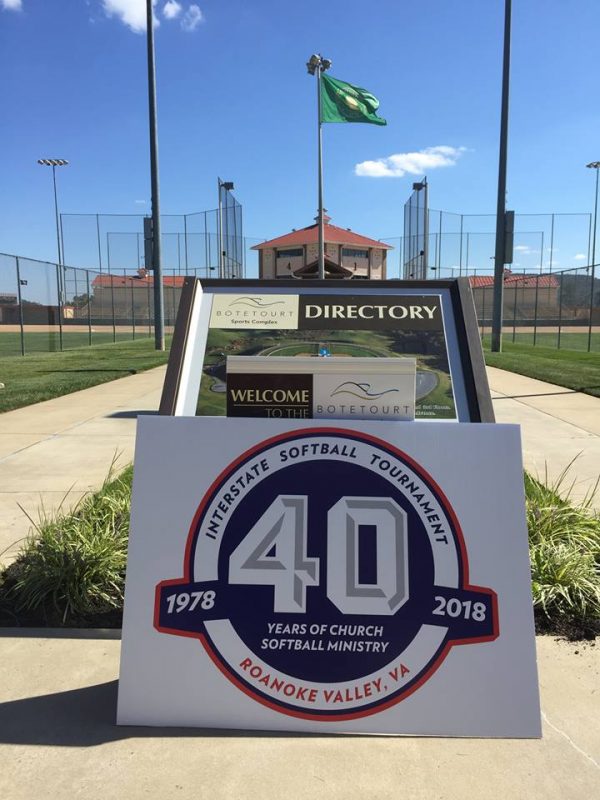 To my right beneath the press box awning is 74-year-old missionary Tabita Kurrle and 73-year-old American Twila Briscoe. They are each full of energy, talking enthusiastically with one another. It’s easy to see why they are best friends. The two of them are the matriarchs of this whole ordeal. Upon rooming together at Anderson University (then Anderson College) in central Indiana in 1962, they forged a lifelong friendship that would connect two families—the Kurrles and the Briscoes—and two countries—the United States and Paraguay—for generations.

The last time Tabita attended the tournament was eight years ago. The last time I saw her was when we were standing together outside a shanty in southeastern Paraguay. Tabita was comforting a young, crying girl. We were each confronted with the horror of poverty on that day, the groaning of creation, the need for action—a moment that will forever be burned into my mind.

Standing just outside the press box awning is Twila’s husband, Charlie. The fact that Charlie is here this weekend is nothing short of miraculous. Less than two months ago, he hydroplaned into oncoming traffic and was t-boned by a semi-truck. His only injury, somehow, was a broken back.

Twila and Charlie started this tournament a little over a decade after they graduated from Anderson in the mid 1960s. They wanted to do something to benefit Paraguay. Tabita had since returned to South America, where she was raised, to pursue her calling as a missionary. She and her husband, Martin, decided to plant their roots in Paraguay, where they eventually had four children—Norberto, Marcos, Priscilla, and Nila—all of whom are now serving as full-time missionaries in Paraguay, which, among many incredible elements, is perhaps the most incredible facet of this story. Since the tournament’s genesis, it has raised over a quarter of a million dollars for the Kurrle family, a family that, for two generations, has helped to improve Paraguay’s broken education system, bolster its economy, narrow the wealth-disparity gap among Paraguayans, and create positive media that brings hope to those on the margins of society.

To my left is 45-year-old Coach Chad Briscoe, Twila and Charlie’s son, and 44-year-old Norberto Kurrle, Tabita’s oldest son. These two also attended school together at Anderson University and would go on to become best friends. Now, Chad, the athletic director at Grace College in Winona Lake, Indiana, directs the tournament each year, with help from his wife, Jamie, his sister, Brooke, and her husband, Tony.

The last time Norberto attended this tournament was in 2014, two years after the car accident that took his wife, Julie, and only son, Timothy, one foggy morning when they were on their way to Asunción to finalize the adoption papers for their newly-adopted daughter, Anahi. Norberto and I sat up on the top floor of the press box, right above me, and talked about grief, sorrow, and, somehow, hope.

The last time I saw Norberto was when I visited Paraguay, where he greeted us at the Asunción airport. We then rode a bus to the port city of Encarnación, down the same highway where his wreck had occurred. I remember spotting a rainbow outside the bus window, stretching across that open, red-clay field at dusk. Norberto leaned over to me and said, “That’s God saying, ‘Welcome to Paraguay.’”

Today Anahi is running around Botetourt with Coach Briscoe’s daughters, Kate and Kinley. Three generations of this Briscoe-Kurrle connection are right in front of me.

I walk over to talk to Tabita. Her oldest daughter, Priscilla, is also in town from Paraguay. The last time she attended the tournament was about 15 years ago. Tabita, typically bubbly and all over the place, like Twila, begins to ask me a series of unrelated questions. She then begins to comment on current affairs in the United States.

“What is going on here?” she says. “Everyone seems to be so angry with each other.”

It is an interesting thought for an outsider to say.

Though Tabita is not trying to be profound (she’s probably just helping me with my struggling Spanish), her comment seems to reflect one of the main themes in my spiritual journey that has carried me through the darkness into the hope I’ve found.

My life, and my spirituality, used to be largely about being right—and defending my position at all costs—but this only led to ignorance, arrogance, and blindness. It seems that we can only fall further into these nuanced, highly-complex, divine principles—like justice, like peace, like liberty, like love—by listening curiously and intently to the voices of the “other”: those who are most different from ourselves, those who have pasts and experiences that might be unlike our own. It might be the only way to move forward and progress as an individual or as a country: to remove ourselves from our self-constructed echo chambers and listen intently to what might be most disruptive. A little agitation might be the only way to see our blindspots.

Just as the Christ blew up the religious, social, and cultural constructs of his day— disruptions that ultimately resulted in his being executed on a Roman cross—maybe God can still work on us individually and as a culture in a similar way today.

Maybe these stories and these people from Paraguay, who share our country’s national colors, can remind us of who we are.

Maybe it takes those on the outside to help us to see what we’ve become.

Stephen Copeland is the author of “Where the Colors Blend: An Authentic Journey through Spiritual Doubt and Despair … and a Beautiful Arrival at Hope,” which is being released by Morgan James Publishing on November 27, 2018. Stephen is a former feature writer and columnist for Sports Spectrum Magazine.