By Sports Spectrum Oct 27, 2011
“Here is a trustworthy saying: If we died with him, we will also live with him; if we endure, we will also reign with him. If we disown him, he will also disown us; if we are faithless, he remains faithful, for he cannot disown himself.” II Timothy 2:11-13

“Here is a trustworthy saying: If we died with him, we will also live with him; if we endure, we will also reign with him. If we disown him, he will also disown us; if we are faithless, he remains faithful, for he cannot disown himself.” II Timothy 2:11-13 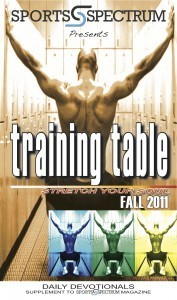 For more than 85 years, futility, frustration and struggle aptly defined the Boston Red Sox and Chicago White Sox, and their fans too, as both franchises chased the dream of winning a World Series title.

The long wait was over. Both franchises, and the fans, had endured.

During that 88-year span, fans of both of those teams saw 14 new franchises begin and 11 franchises move to new cities (including two that moved twice – the Boston Braves went to Milwaukee and then to Atlanta, and the Philadelphia A’s went to Kansas City and then to Oakland – and one that restarted and moved again, the Washington Senators).

To those new and relocated franchises, the loyalty of the fans in Boston and Chicago must have seemed incredible. But, that’s what loyalty is. It’s not fleeting, it’s not wavering, and it doesn’t compel us to run when things get difficult or frustrating. It’s solid and committed and compels us stay put when things seem futile or when we’re going through struggles.

God is loyal to us, too (Hebrews 13:5-6), and should be a model to us concerning our rela- tionship with Him.

Endure hardships so you can enjoy life here and the life to come.