Airing It Out -- Our responsibility 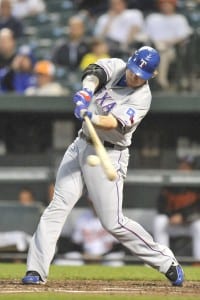 “Brothers and sisters, if someone is caught in a sin, you who live by the Spirit should restore that person gently. But watch yourselves, or you also may be tempted.” Galatians 6:1

When we fall, we learn a lot about ourselves.

When others fall, we learn even more about ourselves because of how we treat the fallen—and most of the time what we learn in that moment, and through our actions, is just as bad, or worse, than what we learned when we fell.

The truth is often hard to deal with—especially when it deals with us.

It is a reminder about how we, as Christians, should deal with Josh Hamilton.

Every baseball fan knows about the much-publicized struggles of Hamilton, the can’t-miss baseball prospect who scouts drooled over and whose pro career was derailed and wrecked by drugs and alcohol in 2002 while he was in the minors and just three years after being the No. 1 overall choice (out of high school) in the 1999 Major League Baseball draft.

Fans had read how Hamilton’s life was consumed with drugs and alcohol from 2001-2006 (despite having a pristine reputation in high school and never consuming either), and they knew about his comeback in 2007 (after getting clean) with the Cincinnati Reds when he finally reached the majors.

They read about the slip up in 2009 when he was caught drinking at a bar and had photos taken with women, and they heard about the recent relapse with alcohol in February.

Fans also had read that he proclaimed to be a Christian, and not just an I-go-to-church-on-Sunday-type-of-Christian, but a Christian whose heart follows after Christ.

When he appeared on the cover of Sports Spectrum in 2008, he said, “Just surrendering and letting God take over, it’s like what (my wife) Katie says: ‘He can do all things and He does it in a perfect way.’ I can’t comprehend or think about what God is doing. All I can do is open my heart and try to listen.”

And later that year in his autobiography, “Beyond Belief,” he wrote, “Without Jesus. I would have been dead long ago.” Last fall, when talking to us about his relapse in 2009, he owned up to his mistake and admitted that the incident happened because “for three weeks I had stopped praying. I stopped fellowshipping with my accountability partner, and I stopped doing my devotions. Only for three weeks. I thought I could have just one drink, and I ended up right back where I had been.”

It was similar to what he said at the press conference after the relapse in February. He confessed, as I John 1:9 says to do, and God cleansed him from all unrighteousness (as that verse also says). It is God’s promise, so we know it’s true.

So, where does all of that leave us as believers?

It should be simple, but it’s complicated because we’re fallen, too. We have the choice to pile it on like others have and call him a hypocrite, or worse, question his Christianity. Or we can remember that God forgave David, Solomon, Peter, and others who have done similar things or worse.

How do we know that? Because we have a guideline, and that guideline is scripture, specifically Galatians 6:1, which gives us the warning to restore gently. Because if we don’t do that, Galatians says we could be tempted in the same way (even if we don’t struggle in that area).

The rest of that passage, Galatians 6:2-5, is worth reading, as well: “Carry each other’s burdens, and in this way you will fulfill the law of Christ. If anyone thinks they are something when they are not, they deceive themselves. Each one should test their own actions. Then they can take pride in themselves alone, without comparing themselves to someone else, for each one should carry their own load.” Our lesson? To restore, or pray for restoration, and forgive. If not, we have missed the entire point of Christ’s death on the cross, which gave us redemption, restoration and forgiveness despite our sin.

This column was published in the March 2012 Sports Spectrum DigiMag. Print and digital subscribers, log in and view the issue here. Brett Honeycutt is the managing editor of Sports Spectrum magazine. His column addresses topics from a biblical perspective. Follow him on Twitter-@Brett_Honeycutt.