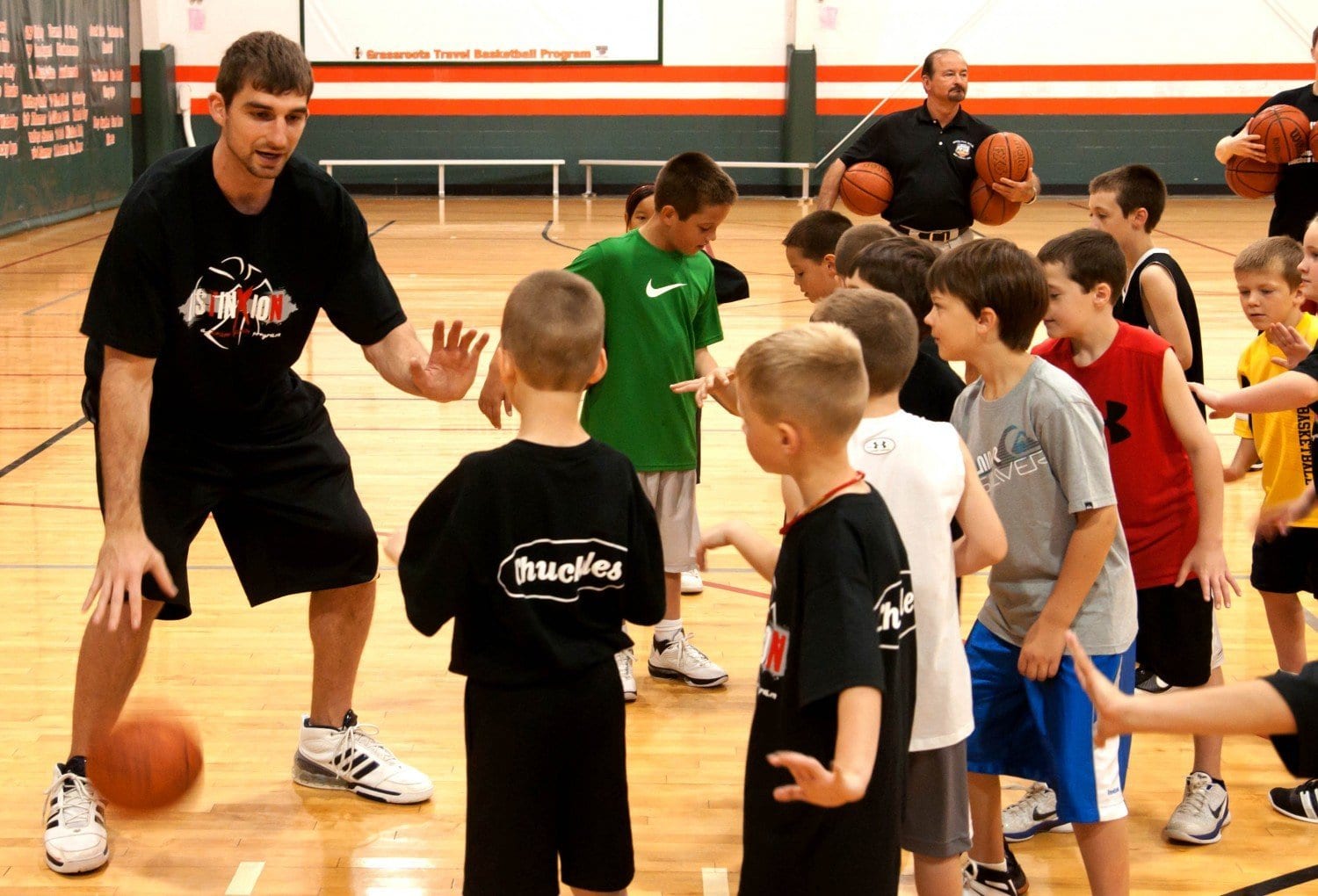 It happened to Luke Zeller three times—the recurrence of a dream.

“What do you want to do when you grow up?” a television reporter asked Luke when he was 14 years old.

“I want to start a basketball camp,” he said.

When Luke played basketball at the University of Notre Dame, it happened again. This time it was during an event at his roommate’s church, and he ended up sitting next to Justin Maust, the co-founder of Five Star Life, a character-building organization in Elkhart, Ind. They started talking.

“What do you think God wants for your life?” Justin eventually asked Luke.

“Well,” Luke said, “I used to think that it was running a Christian-based basketball camp.”

Toward the end of Luke’s tenure at Notre Dame, the dream returned—when he had to give a presentation for one of his entrepreneurship classes and introduced one of his business ideas, a character-building basketball camp.

“It was fun to dream about, but I didn’t think it would work,” Luke says.

It had been a dream ingrained in his mind for a decade.

But only a dream.

Luke Zeller and Bryce Bow were sitting on the lawn outside the College Football Hall of Fame in South Bend, Ind.

They were upperclassmen in college—Luke, a star at Notre Dame, and Bow, a player at Goshen College in northern Indiana—when they were randomly paired up to work a free basketball clinic raising money for homeless awareness in South Bend.

Sitting on the lawn after completing the basketball camp, Luke talked about his vision for a basketball ministry.

There was a connection.

There was a connection when Luke met his bride, Hope Zeller, too. But it had nothing to do with basketball. Truth is, Hope probably never imagined being part of a basketball ministry.

When she and Luke Zeller started dating in college, she hardly knew who he was. All she knew was that he played basketball. She didn’t know he earned the famed Indiana Mr. Basketball award, that he hit a buzzer-beating, half-court shot to bring Washington High School its first state title, that he was adored at Notre Dame or that he was idolized in his hometown. To Hope, he was just “Luke.”

The first time they met each other, they went to a movie with a group of friends. Afterwards, they went to Wal-Mart. Luke bought a basketball video game.

“Don’t you play basketball?” she asked.

“But you want to play more basketball?”

Hope admits it was culture-shock dating Luke—going to Notre Dame games and seeing people wait outside the locker room just to talk to him, or visiting Washington for the first time and people knowing her name that she had never even met.

“We couldn’t walk anywhere without people talking,” Hope says. “I felt like I was in a fishbowl being watched by my owners…But what convinced me that the Zellers’ lives weren’t so terrible was how they handled it. The reality is that they are normal people. They live normal lives, and they are humble.”

With the Zellers—parents Lorri and Steve and sons Luke, Tyler, and Cody—she’d be a part of something big.

That’s the phrase on the website for DistinXion—the name of Luke Zeller’s basketball ministry. The name of his dream.

“God is not a God of confusion,” Luke says. “I had always envisioned it and seen it. It was simple. This was it.”

It truly is a family program—all the way from the name, which his wife Hope came up with because the Greek symbol for Christ is “X;” to the basketball side, which is managed by Luke with summer help from Tyler, who is a projected top-15 pick in the NBA Draft and played at the University of North Carolina, and Cody, who helped lead Indiana University to the Sweet 16 his freshman season; to the counseling side, which is run by Luke’s parents, Lorri and Steve; to the marketing side, which is directed by Hope.

“I know there is a reason the Lord made the boys seven-feet tall,” Lorri says. “And I don’t think it’s to play basketball. He gave them that basketball talent so they could have a platform to glorify Him.”

DistinXion isn’t new—it’s been around for a few years—but the Zellers are starting to see it explode, evidenced by its recent national recognition in USA Today and on CBS.

What began as a dream, and turned into a nearly 80-page business plan for a class at Notre Dame, has evolved into what it is today, where the Zellers travel to different cities during the summer and host camps for grade school and middle school children, using basketball to teach character and faith.

With the help of Bryce Bow and Hope, it continues to expand.

After working as an athletic director at Florida Christian College and connecting with trainer Ganon Baker, who has worked with Kobe Bryant, Chris Paul, and LeBron James, the 25-year-old Bow is leaving a well-paying job to start full-time with DistinXion in July as the organization’s trainer. And while the basketball side of DistinXion primarily targets boys, Hope is spearheading a cheerleading division to impact young girls—something she believes is essential when “girls’ feeling of self-image and self-wroth is at an all-time low.”

“There are 52 weeks in a year, and we only get them for one weekend,” Hope says. “We don’t think we’ll be an organization that will immediately change everything. But we still want to start the change. Hopefully over time, more parents will learn from our camp that they want to raise their kids with character.”

Though it’s Luke’s vision, the oldest Zeller is quick to say that he isn’t the one who built DistinXion. God did.

“Fifty percent of our funding is based on sponsors and donors. That’s an absolutely stupid way to run a business,” Luke jokes and admits. “In a worldly way, it doesn’t make sense, but I see myself as a steward of God’s organization.”

Luke says that when he looked at DistinXion’s most recent income statement, all he did was fall to his knees. He had just hired two full-time people, and all he kept asking God was, “How?”

“When we have no clue where we’re going, I rejoice because it makes me completely rely on Him,” Hope says. “DistinXion took off so much quicker than any of us would have thought. There are a lot of times when we just sit and say, ‘I have no idea how this is going to work out.’ But in the end, God continues to provide the people and provide the finances.”

“At the end of the day, we could have a lot of awards, but what’s the legacy we’re going to leave?” Luke says. “What’s the impact we’ll echo into eternity?”

And now, the whole family is following.