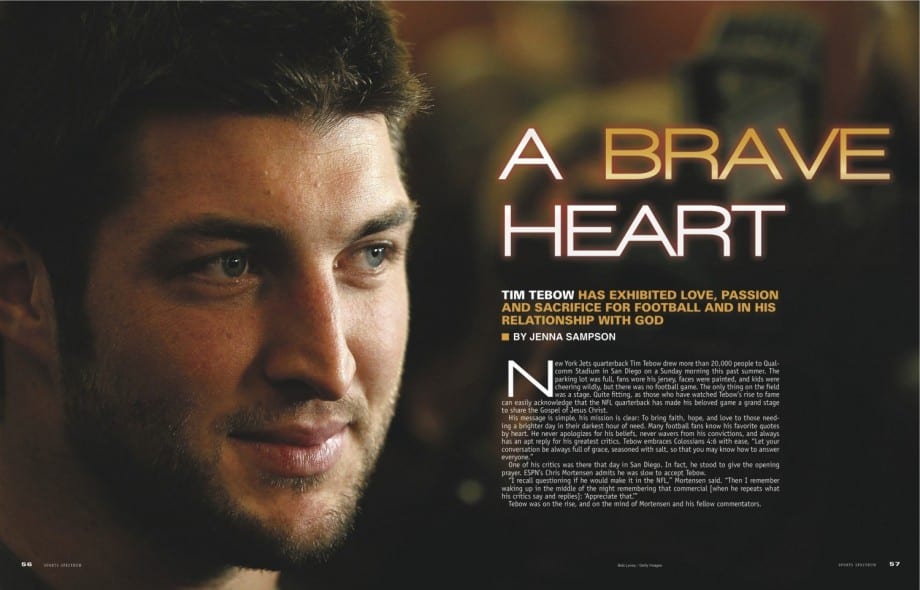 New York Jets quarterback Tim Tebow drew more than 20,000 people to Qualcomm Stadium in San Diego on a Sunday morning this past summer. The parking lot was full, fans wore his jersey, faces were painted, and kids were cheering wildly, but there was no football game. The only thing on the field was a stage. Quite fitting, as those who have watched Tebow’s rise to fame can easily acknowledge that the NFL quarterback has made his beloved game a grand stage to share the Gospel of Jesus Christ.

His message is simple, his mission is clear: To bring faith, hope, and love to those needing a brighter day in their darkest hour of need. Many football fans know his favorite quotes by heart. He never apologizes for his beliefs, never wavers from his convictions, and always has an apt reply for his greatest critics. Tebow embraces Colossians 4:6 with ease, “Let your conversation be always full of grace, seasoned with salt, so that you may know how to answer everyone.”

One of his critics was there that day in San Diego. In fact, he stood to give the opening prayer. ESPN’s Chris Mortensen admits he was slow to accept Tebow.

“I recall questioning if he would make it in the NFL,” Mortensen said. “Then I remember waking up in the middle of the night remembering that commercial [when he repeats what his critics say and replies]: ‘Appreciate that.’”

Tebow was on the rise, and on the mind of Mortensen and his fellow commentators.

“That countenance, that’s the countenance I want,” continued Mortensen. “There have been some great Christian men to come through the National Football League, but I’m not sure I’ve ever seen one like Tim Tebow—the platform the Lord has given him, and that He has placed him in New York of all places.”

That countenance is one all sports fans have come to know. Tebow strives to have a heart like Jesus, but plays football with the same tenacity that William Wallace possessed on the battlefield in the movie “Braveheart.” It was his father who first introduced him to the movie at age eight after returning from a missions trip.

“Those three things are very easy to say, but very hard to do,” Tebow shares. “When you have those three things, no matter what you’re trying to accomplish, I think you’re going to be pretty successful.”

More than the Game

And successful he has been. He became an NCAA Division I quarterback for the Florida Gators, won a Heisman Trophy, won a national championship, became a first-round NFL draft pick, became a starting NFL quarterback, and led the Denver Broncos to their first playoff appearance since 2006. This fall he takes the gridiron for the New York Jets, and in a city with bright lights and celebrities, this may be his biggest stage yet.

But to Tebow, it’s not any of those things that he considers the greatest moment in his sports career.

“My junior year, Coach (Urban) Meyer got us together before the season started and gave us a talk about finishing strong. All season, that was our motto, ‘Finish Strong.’”

The team battled through the championship game, and Tebow threw a jump pass for the final touchdown.

“It was a sober moment to realize we had just won a national championship,” he says, “And to realize we had done what Coach Meyer asked, and that was to finish strong. I undid my chinstrap as Coach walked toward me, and he gave me a great big hug and said in my ear, ‘Timmy, I love you, I’m proud of you, you finished strong.’ For me as an athlete, that was the greatest moment I’ve had in sports. Better than any Heisman Trophy or any championship or playoff I could possibly have, because that was a father figure telling me he loved me and that he was proud of me, that I finished strong. Later that night, I decided to make that my goal for life. One day I’m going to stand before Jesus Christ, and my ultimate goal is that He pulls off his headset and gives me a hug, and says, ‘Timmy, I love you, I’m proud of you, and you finished strong.’”

It’s easy to see why men and boys view the 6-foot-3, muscled quarterback as a role model.

“The world looks at me and thinks I’m a football player that’s a Christian,” Tebow explains. “I look at the world and say I’m a Christian that happens to play football. That’s my dream and passion: To be a great role model to the next generation, to the boys that look up to me.” 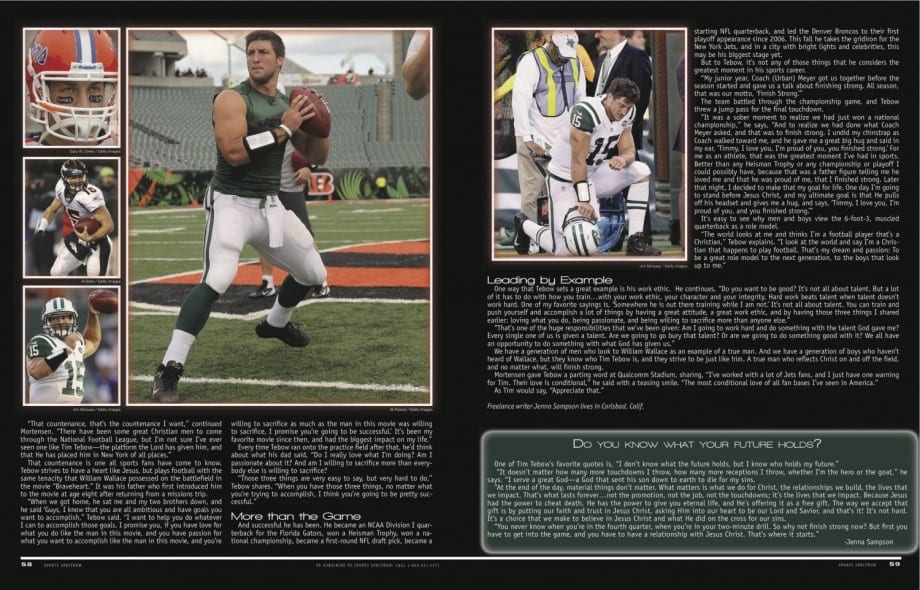 One way that Tebow sets a great example is his work ethic.  He continues, “Do you want to be good? It’s not all about talent. But a lot of it has to do with how you train…with your work ethic, your character and your integrity. Hard work beats talent when talent doesn’t work hard. One of my favorite sayings is, ‘Somewhere he is out there training while I am not.’ It’s not all about talent. You can train and push yourself and accomplish a lot of things by having a great attitude, a great work ethic, and by having those three things I shared earlier: loving what you do, being passionate, and being willing to sacrifice more than anyone else.”

We have a generation of men who look to William Wallace as an example of a true man. And we have a generation of boys who haven’t heard of Wallace, but they know who Tim Tebow is, and they strive to be just like him. A true man who reflects Christ on and off the field, and no matter what, will finish strong.

Mortensen gave Tebow a parting word at Qualcomm Stadium, sharing, “I’ve worked with a lot of Jets fans, and I just have one warning for Tim. Their love is conditional,” he said with a teasing smile. “The most conditional love of all fan bases I’ve seen in America.”

As Tim would say, “Appreciate that.”