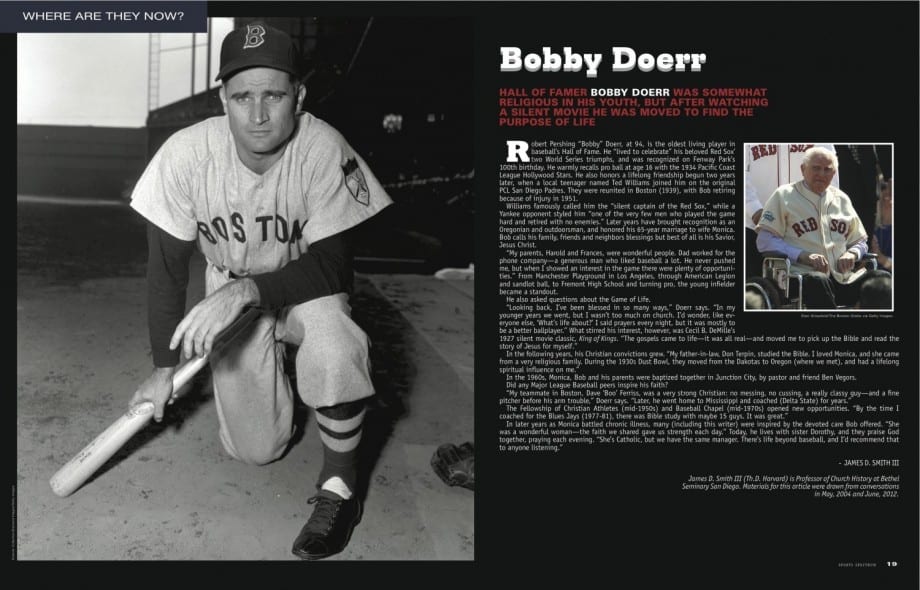 Robert Pershing “Bobby” Doerr, at 94, is the oldest living player in baseball’s Hall of Fame. He “lived to celebrate” his beloved Red Sox’ two World Series triumphs, and was recognized on Fenway Park’s 100th birthday. He warmly recalls pro ball at age 16 with the 1934 Pacific Coast League Hollywood Stars. He also honors a lifelong friendship begun two years later, when a local teenager named Ted Williams joined him on the original PCL San Diego Padres. They were reunited in Boston (1939), with Bob retiring because of injury in 1951.

Williams famously called him the “silent captain of the Red Sox,” while a Yankee opponent styled him “one of the very few men who played the game hard and retired with no enemies.” Later years have brought recognition as an Oregonian and outdoorsman, and honored his 65-year marriage to wife Monica. Bob calls his family, friends and neighbors blessings but best of all is his Savior, Jesus Christ.

“My parents, Harold and Frances, were wonderful people. Dad worked for the phone company—a generous man who liked baseball a lot. He never pushed me, but when I showed an interest in the game there were plenty of opportunities.” From Manchester Playground in Los Angeles, through American Legion and sandlot ball, to Fremont High School and turning pro, the young infielder became a standout.

He also asked questions about the Game of Life.

“Looking back, I’ve been blessed in so many ways,” Doerr says. “In my younger years we went, but I wasn’t too much on church. I’d wonder, like everyone else, ‘What’s life about?’ I said prayers every night, but it was mostly to be a better ballplayer.” What stirred his interest, however, was Cecil B. DeMille’s 1927 silent movie classic, King of Kings. “The gospels came to life—it was all real—and moved me to pick up the Bible and read the story of Jesus for myself.”

In the following years, his Christian convictions grew. “My father-in-law, Don Terpin, studied the Bible. I loved Monica, and she came from a very religious family. During the 1930s Dust Bowl, they moved from the Dakotas to Oregon (where we met), and had a lifelong spiritual influence on me.”

In the 1960s, Monica, Bob and his parents were baptized together in Junction City, by pastor and friend Ben Vegors.

Did any Major League Baseball peers inspire his faith?

“My teammate in Boston, Dave ‘Boo’ Ferriss, was a very strong Christian: no messing, no cussing, a really classy guy—and a fine pitcher before his arm trouble,” Doerr says. “Later, he went home to Mississippi and coached (Delta State) for years.”

The Fellowship of Christian Athletes (mid-1950s) and Baseball Chapel (mid-1970s) opened new opportunities. “By the time I coached for the Blues Jays (1977-81), there was Bible study with maybe 15 guys. It was great.”

In later years as Monica battled chronic illness, many (including this writer) were inspired by the devoted care Bob offered. “She was a wonderful woman—the faith we shared gave us strength each day.” Today, he lives with sister Dorothy, and they praise God together, praying each evening. “She’s Catholic, but we have the same manager. There’s life beyond baseball, and I’d recommend that to anyone listening.”

James D. Smith III (Th.D. Harvard) is Professor of Church History at Bethel Seminary San Diego. Materials for this article were drawn from conversations in May, 2004 and June, 2012.

INSIDE THE CHAPEL PODCAST: Texas State FCA Director Pat Ford on 'Daniel in the Lions Den'

Daily Devotional: Thursday, January 13 - God, Where Are You?