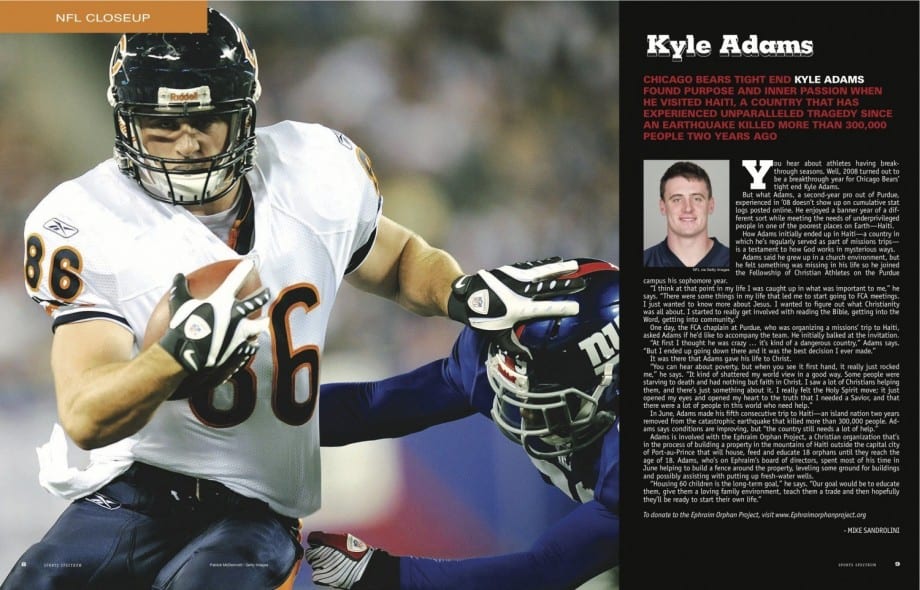 You hear about athletes having breakthrough seasons. Well, 2008 turned out to be a breakthrough year for Chicago Bears’ tight end Kyle Adams.

But what Adams, a second-year pro out of Purdue, experienced in ’08 doesn’t show up on cumulative stat logs posted online. He enjoyed a banner year of a different sort while meeting the needs of underprivileged people in one of the poorest places on Earth—Haiti.

How Adams initially ended up in Haiti—a country in which he’s regularly served as part of missions trips—is a testament to how God works in mysterious ways.

Adams said he grew up in a church environment, but he felt something was missing in his life so he joined the Fellowship of Christian Athletes on the Purdue campus his sophomore year.

“I think at that point in my life I was caught up in what was important to me,” he says. “There were some things in my life that led me to start going to FCA meetings. I just wanted to know more about Jesus. I wanted to figure out what Christianity was all about. I started to really get involved with reading the Bible, getting into the Word, getting into community.”

One day, the FCA chaplain at Purdue, who was organizing a missions’ trip to Haiti, asked Adams if he’d like to accompany the team. He initially balked at the invitation.

“At first I thought he was crazy … it’s kind of a dangerous country,” Adams says. “But I ended up going down there and it was the best decision I ever made.”

It was there that Adams gave his life to Christ.

“You can hear about poverty, but when you see it first hand, it really just rocked me,” he says. “It kind of shattered my world view in a good way. Some people were starving to death and had nothing but faith in Christ. I saw a lot of Christians helping them, and there’s just something about it. I really felt the Holy Spirit move; it just opened my eyes and opened my heart to the truth that I needed a Savior, and that there were a lot of people in this world who need help.”

In June, Adams made his fifth consecutive trip to Haiti—an island nation two years removed from the catastrophic earthquake that killed more than 300,000 people. Adams says conditions are improving, but “the country still needs a lot of help.”

Adams is involved with the Ephraim Orphan Project, a Christian organization that’s in the process of building a property in the mountains of Haiti outside the capital city of Port-au-Prince that will house, feed and educate 18 orphans until they reach the age of 18. Adams, who’s on Ephraim’s board of directors, spent most of his time in June helping to build a fence around the property, leveling some ground for buildings and possibly assisting with putting up fresh-water wells.

“Housing 60 children is the long-term goal,” he says. “Our goal would be to educate them, give them a loving family environment, teach them a trade and then hopefully they’ll be ready to start their own life.”

To donate to the Ephraim Orphan Project, visit www.Ephraimorphanproject.org