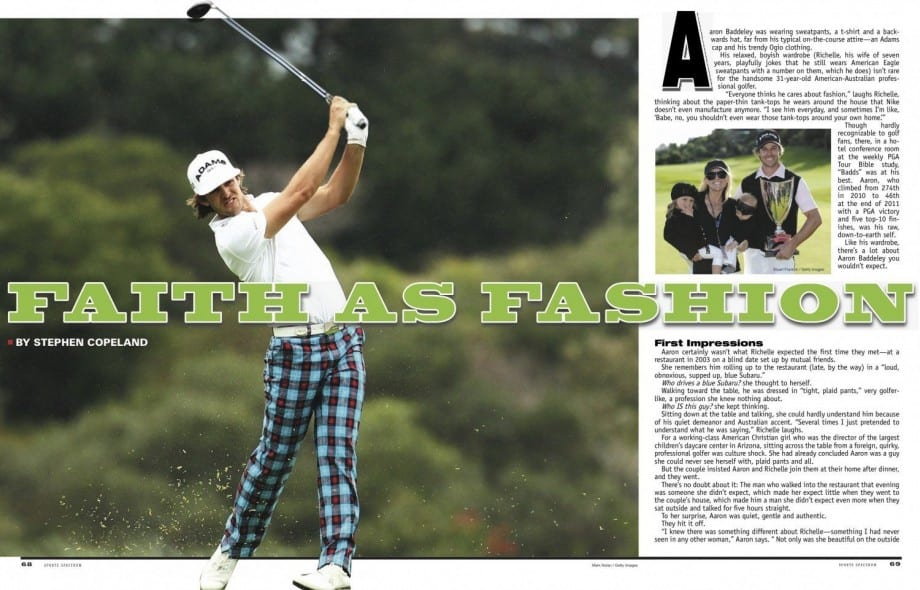 Aaron Baddeley was wearing sweatpants, a t-shirt and a backwards hat, far from his typical on-the-course attire—an Adams cap and his trendy Ogio clothing.

His relaxed, boyish wardrobe (Richelle, his wife of seven years, playfully jokes that he still wears American Eagle sweatpants with a number on them, which he does) isn’t rare for the handsome 31-year-old American-Australian professional golfer.

“Everyone thinks he cares about fashion,” laughs Richelle, thinking about the paper-thin tank-tops he wears around the house that Nike doesn’t even manufacture anymore. “I see him everyday, and sometimes I’m like, ‘Babe, no, you shouldn’t even wear those tank-tops around your own home.’”

Though hardly recognizable to golf fans, there, in a hotel conference room at the weekly PGA Tour Bible study, “Badds” was at his best. Aaron, who climbed from 274th in 2010 to 46th at the end of 2011 with a PGA victory and five top-10 finishes, was his raw, down-to-earth self.

Like his wardrobe, there’s a lot about Aaron Baddeley you wouldn’t expect.

Aaron certainly wasn’t what Richelle expected the first time they met—at a restaurant in 2003 on a blind date set up by mutual friends.

She remembers him rolling up to the restaurant (late, by the way) in a “loud, obnoxious, souped-up, blue Subaru.”

Who drives a blue Subaru? she thought to herself.

Walking toward the table, he was dressed in “tight, plaid pants,” very golferlike, a profession she knew nothing about.

Who IS this guy? she kept thinking.

Sitting down at the table and talking, she could hardly understand him because of his quiet demeanor and Australian accent. “Several times I just pretended to understand what he was saying,” Richelle laughs.

For a working-class American Christian girl who was the director of the largest children’s daycare center in Arizona, sitting across the table from a foreign, quirky, professional golfer was culture shock. She had already concluded Aaron was a guy she could never see herself with, plaid pants and all.

But the couple insisted Aaron and Richelle join them at their home after dinner, and they went.

To her surprise, Aaron was quiet, gentle and authentic.

They hit it off.

“I knew there was something different about Richelle—something I had never seen in any other woman,” Aaron says. “ Not only was she beautiful on the outside but her passion for the Lord, her love for others, and her caring personality was so obvious and I could tell she was something rare and special.”

He would go on to call her his “Eve” during their dating relationship, frequently telling her, “God made you perfect for me,” and then wedding her in 2005.

“I’d never been able to talk to someone so much about my relationship with the Lord,” Richelle says, recalling the night when they talked for five hours. “It was so natural for him…I knew I had never met someone like him. Never met someone so genuine.”

He had to run home after his workout and drink a protein shake. 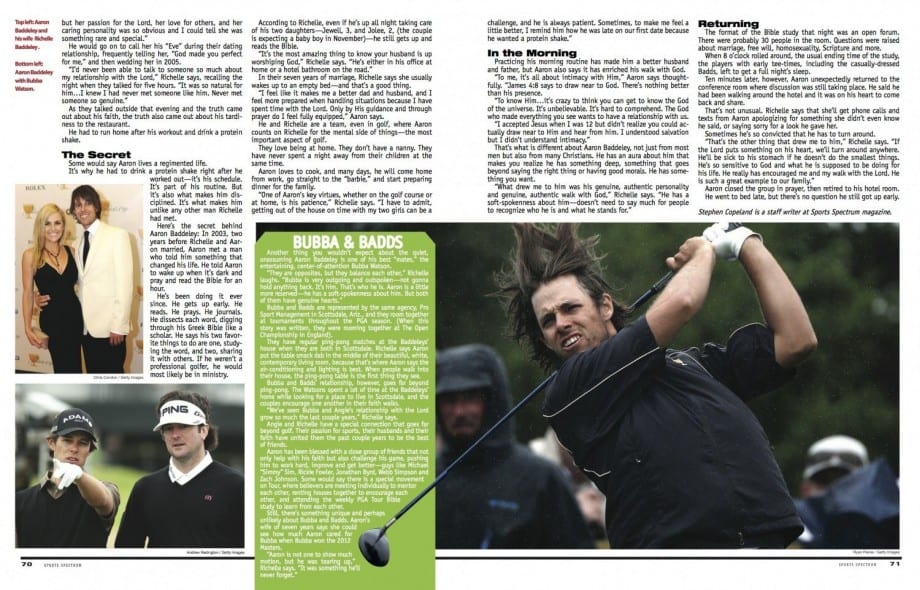 Some would say Aaron lives a regimented life.

It’s why he had to drink a protein shake right after he worked out—it’s his schedule. It’s part of his routine. But it’s also what makes him disciplined. It’s what makes him unlike any other man Richelle had met.

Here’s the secret behind Aaron Baddeley: In 2003, two years before Richelle and Aaron married, Aaron met a man who told him something that changed his life. He told Aaron to wake up when it’s dark and pray and read the Bible for an hour.

He’s been doing it ever since. He gets up early. He reads. He prays. He journals. He dissects each word, digging through his Greek Bible like a scholar. He says his two favorite things to do are one, studying the word, and two, sharing it with others. If he weren’t a professional golfer, he would most likely be in ministry.

According to Richelle, even if he’s up all night taking care of his two daughters—Jewell, 3, and Jolee, 2, (the couple is expecting a baby boy in November)—he still gets up and reads the Bible.

“It’s the most amazing thing to know your husband is up worshiping God,” Richelle says. “He’s either in his office at home or a hotel bathroom on the road.”

In their seven years of marriage, Richelle says she usually wakes up to an empty bed—and that’s a good thing.

“I feel like it makes me a better dad and husband, and I feel more prepared when handling situations because I have spent time with the Lord. Only by His guidance and through prayer do I feel fully equipped,” Aaron says.

He and Richelle are a team, even in golf, where Aaron counts on Richelle for the mental side of things—the most important aspect of golf.

They love being at home. They don’t have a nanny. They have never spent a night away from their children at the same time.

Aaron loves to cook, and many days, he will come home from work, go straight to the “barbie,” and start preparing dinner for the family.

“One of Aaron’s key virtues, whether on the golf course or at home, is his patience,” Richelle says. “I have to admit, getting out of the house on time with my two girls can be a challenge, and he is always patient. Sometimes, to make me feel a little better, I remind him how he was late on our first date because he wanted a protein shake.”

Practicing his morning routine has made him a better husband and father, but Aaron also says it has enriched his walk with God.

“To me, it’s all about intimacy with Him,” Aaron says thoughtfully. “James 4:8 says to draw near to God. There’s nothing better than his presence.

“To know Him…it’s crazy to think you can get to know the God of the universe. It’s unbelievable. It’s hard to comprehend. The God who made everything you see wants to have a relationship with us.

“I accepted Jesus when I was 12 but didn’t realize you could actually draw near to Him and hear from him. I understood salvation but I didn’t understand intimacy.”

That’s what is different about Aaron Baddeley, not just from most men but also from many Christians. He has an aura about him that makes you realize he has something deep, something that goes beyond saying the right thing or having good morals. He has something you want.

“What drew me to him was his genuine, authentic personality and genuine, authentic walk with God,” Richelle says. “He has a soft-spokenness about him—doesn’t need to say much for people to recognize who he is and what he stands for.”

The format of the Bible study that night was an open forum. There were probably 30 people in the room. Questions were raised about marriage, free will, homosexuality, Scripture and more.

When 8 o’clock rolled around, the usual ending time of the study, the players with early tee-times, including the casually-dressed Badds, left to get a full night’s sleep.

Ten minutes later, however, Aaron unexpectedly returned to the conference room where discussion was still taking place. He said he had been walking around the hotel and it was on his heart to come back and share.

That’s not unusual. Richelle says that she’ll get phone calls and texts from Aaron apologizing for something she didn’t even know he said, or saying sorry for a look he gave her.

Sometimes he’s so convicted that he has to turn around.

“That’s the other thing that drew me to him,” Richelle says. “If the Lord puts something on his heart, we’ll turn around anywhere. He’ll be sick to his stomach if he doesn’t do the smallest things. He’s so sensitive to God and what he is supposed to be doing for his life. He really has encouraged me and my walk with the Lord. He is such a great example to our family.”

Aaron closed the group in prayer, then retired to his hotel room. He went to bed late, but there’s no question he still got up early.

Stephen Copeland is a staff writer at Sports Spectrum magazine.

Another thing you wouldn’t expect about the quiet, unassuming Aaron Baddeley is one of his best “mates,” the entertaining, center-of-attention Bubba Watson.

“They are opposites, but they balance each other,” Richelle laughs. “Bubba is very outgoing and outspoken—not gonna hold anything back. It’s him. That’s who he is. Aaron is a little more reserved—he has a soft-spokenness about him. But both of them have genuine hearts.”

Bubba and Badds are represented by the same agency, Pro Sport Management in Scottsdale, Ariz., and they room together at tournaments throughout the PGA season. (When this story was written, they were rooming together at The Open Championship in England).

They have regular ping-pong matches at the Baddeleys’ house when they are both in Scottsdale. Richelle says Aaron put the table smack dab in the middle of their beautiful, white, contemporary living room, because that’s where Aaron says the air-conditioning and lighting is best. When people walk into their house, the ping-pong table is the first thing they see.

Bubba and Badds’ relationship, however, goes far beyond ping-pong. The Watsons spent a lot of time at the Baddeleys’ home while looking for a place to live in Scottsdale, and the couples encourage one another in their faith walks.

“We’ve seen Bubba and Angie’s relationship with the Lord grow so much the last couple years,” Richelle says.

Angie and Richelle have a special connection that goes far beyond golf. Their passion for sports, their husbands and their faith have united them the past couple years to be the best of friends.

Aaron has been blessed with a close group of friends that not only help with his faith but also challenge his game, pushing him to work hard, improve and get better—guys like Michael “Simmy” Sim, Rickie Fowler, Jonathan Byrd, Webb Simpson and Zach Johnson. Some would say there is a special movement on Tour, where believers are meeting individually to mentor each other, renting houses together to encourage each other, and attending the weekly PGA Tour Bible study to learn from each other.

Still, there’s something unique and perhaps unlikely about Bubba and Badds. Aaron’s wife of seven years says she could see how much Aaron cared for Bubba when Bubba won the 2012 Masters.

“Aaron is not one to show much motion, but he was tearing up,” Richelle says. “It was something he’ll never forget.”