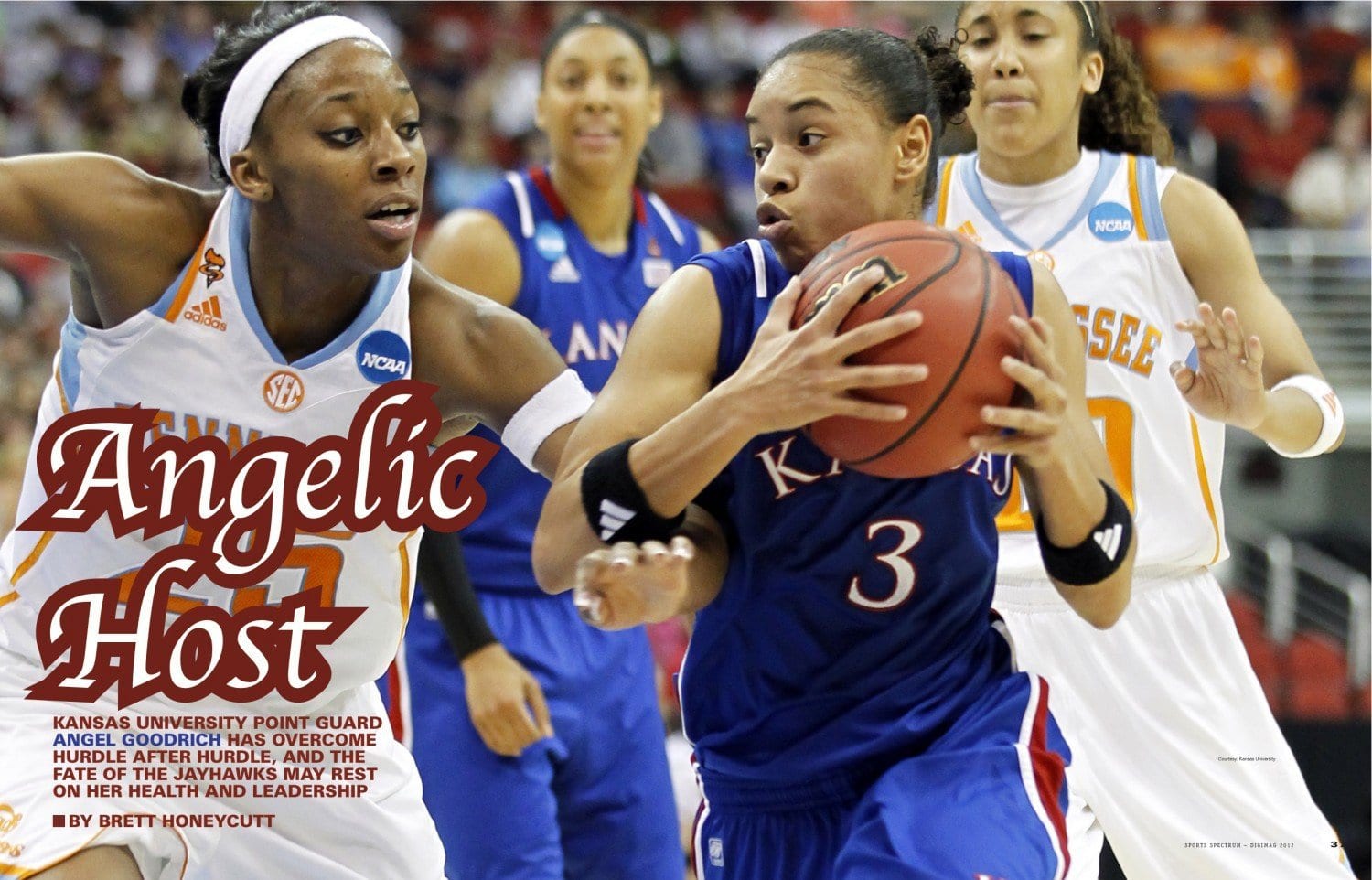 Angel Goodrich was the key last season in Kansas’ improbable 70-64 upset against third-seeded Delaware, helping the Jayhawks advance to the Sweet 16 of the NCAA women’s basketball tournament for the first time since 1998.

Goodrich’s 27 points led the 11th-seeded Jayhawks, who surprised many by even making the tournament and surprised even more by beating a Delaware team that entered with a 31-1 record and was led by the nation’s leading scorer, 6-foot-5 Elena Delle Donne.

Even though Kansas lost in the next round to perennial national power Tennessee, the run was a testament to Goodrich’s hard work to overcome setbacks in her own life.

Goodrich enters her senior season as one of the nation’s best point guards after leading the nation in assists (7.4 per game) last season and setting Big 12 and Kansas single-season records for assists (250).

But the road to the Sweet 16 was tough, not just because Kansas had to beat a team like Delaware, but because the Jayhawks had to overcome the loss of leading scorer Carolyn Davis to a knee injury at the beginning of February and then had to overcome the disappointment of losing six of their last eight regular-season games.

Overcoming, though, is what Goodrich had dealt with several seasons prior—multiple times.

As a high school senior from Oklahoma in 2008, Goodrich was one of the most highly touted point guards in the nation. She was an All-American and Oklahoma’s 2007 Gatorade Player of the Year who had led Sequoyah High to three state titles and one runner-up finish. She even earned all-state as a sprinter in track.

Success was inevitable. Or so it seemed.

During the second day of practice her freshman year at Kansas in October of 2008, Goodrich crumpled to the floor.

The pain around her knee was evident.

“To be honest, I didn’t know what to think,” Goodrich says. “It hurt…I knew I did something.”

She had torn the anterior cruciate ligament in her left knee and would miss the entire season.

“It was very hard,” she says. “The tough part was just not being able to get out there and play my first year. Coming up here and being away from home, it was tough, because I couldn’t just go and talk to my mom. Another tough thing was it was painful. It’s like a mental thing. You had to have a strong mentality to get through it. It was just tough through the whole thing…trying to push through and not knowing what you had to go through.”

The following season, she started the first 15 games and was fourth nationally in assists (7.1 per game) while also leading the Big 12 in that category.

Then, during the second half of a game against Oklahoma State, on Jan. 12, 2010, it happened again. This time she tore the ACL in her left knee.

Her team, family, and her faith would be keys to helping her through it.

“It helped so much knowing they were there and they wanted to support me,” Goodrich said.

“The second time I was thinking, ‘Why me? Why did this happen?’ But through the whole thing, I got to the point that I wasn’t going to let this get me down. I’m not going to let this stop me. I’m going to keep pushing. This is something I really love to do and this is not going to be the thing that stops me from doing it.”

At first, she questioned God, but later realized the blessing in the injuries.

“Now I look back and I know He did it for a reason,” she said. “I know He made me a better person for putting me through it, and He was there with me through the whole process, and He just made me who I am today.”

Her family has been key in encouraging her in her spiritual walk, telling her that God “puts you through things to make you a stronger person.

“You just have to let him lead you on the right path.”

Brett Honeycutt is the managing editor at Sports Spectrum magazine. This story was published in the All-Basketball, October 2012 DigiMag.