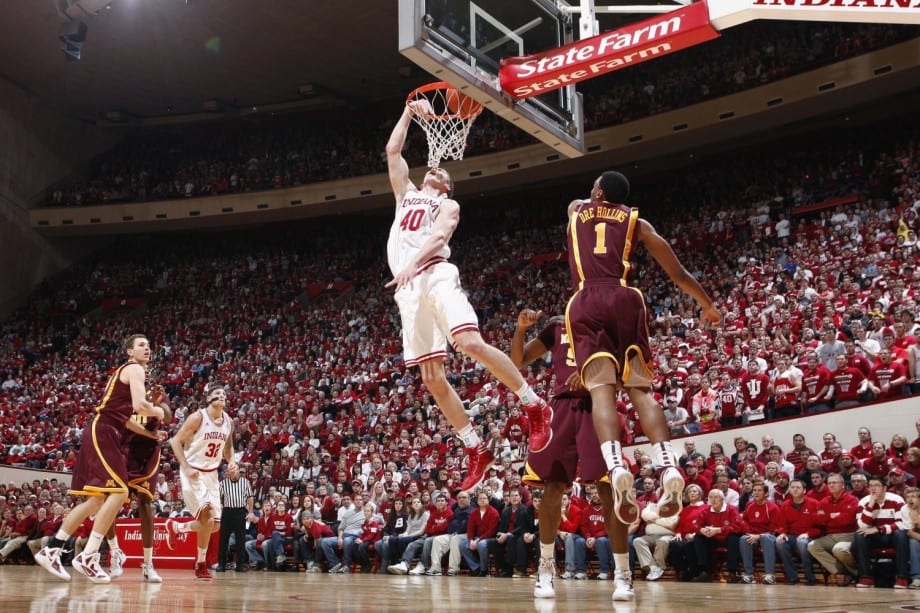 When you grow up a Zeller, you have some big shoes to fill. And it’s not just because Luke and Tyler wear size 18 and 19 shoes, respectively.

The eldest brother, Luke, led Washington High School to an Indiana Class 3A championship, swooshing a miracle heave from mid-court his senior season in 2005. The middle brother, Tyler, the 17th pick in the 2012 NBA Draft, led the Hatchets to another title in 2008 and set an Indiana scoring record during his senior campaign. And to top it off, both received the illustrious Indiana Mr. Basketball award and were named McDonald’s All-Americans their senior seasons.

Enter Cody. Big shoes to fill? Psh. If they were, it was only because his shoe size is 16.

The youngest Zeller did the exact same thing.

With all that hardware, Steve and Lorri Zeller could turn their home into a museum. And their wardrobe—between Notre Dame (Luke), North Carolina (Tyler) and Indiana (Cody)—probably looks like a case of Crayola Crayons.

And Cody went to Indiana.

One hour up the road a storied college basketball program was catastrophically imploding. Cody was a freshman at Washington when former Indiana head coach Kelvin Sampson was caught in recruiting violations, a sin that crippled current coach Tom Crean and his program for the next three years.

During those three years, Cody won more state championships (two) than Indiana had post-season appearances (0), had fewer total losses (10) than the Hoosiers had in conference play last season (15) and nearly had an equal number of wins (68) as Indiana had losses (66).

You can understand, then, why the youngest Zeller was dubbed the savior of Indiana basketball once he turned down Butler and North Carolina to commit to the Hoosiers last November. “I don’t look at myself as a savior, because there is only one Savior,” Cody says.

But all of Indiana did. Quite a bit of pressure for an 18-year-old…at least you’d think.

“You’d ask Cody, and he’d say, ‘What expectations?’” says his mother Lorri. “He doesn’t worry about a lot of things. Good sense of humor. Flexible. Goes with the flow. Our other boys may be more detail-oriented. Cody is like, ‘Eh, it’s no good to worry about it.’”

“If anyone could handle it, it was Cody.”

Over 50 media outlets were in attendance when Cody made a simple two-second statement that was supposedly going to put Indiana basketball back on the map. “Next year, I’m going to IU.”

Luke recalls a member of the media asking afterward about pressure: “Cody responded by saying, ‘You guys put the pressure. I don’t feel any pressure. I just decided to go to college, and you guys cared.’”

That perspective is what Luke calls “childlike faith,” something Cody learned from watching his two older brothers undergo big game after big game throughout their careers and remain the same whether win or lose. At the end of the day, it’s just basketball…yes, even in Indiana.

Instead of wrapping his identity up in an orange ball, Cody just laughs it off, tweets that he’s going to wear a “#44 North Carolina jersey with big ears, a big nose and clown shoes” for Halloween and changes his mother’s Facebook status to read “I’m so thankful for my boys, especially Tyler because he’s adopted.”

“He’s the king of one liners,” Tyler says.

Even Luke’s wife, Hope, noticed while watching home videos that—at the mere age of three—Cody had the same mischievous and untrustworthy grin he has today.  “You can just see that the wheels are turning,” Luke says.

Perhaps it’s a good thing that the “chillest” of the Zellers wound up at Indiana. After all, if you’re the guy who routinely rubber bands the trigger on the sprayer in the kitchen sink so it shoots you in the face (“The kitchen sink prank is ongoing,” Luke jokes), you can certainly laugh about a fake Cody Zeller Twitter account called “The Big Handsome,” a Hoosier phenomenon that has generated almost 14,000 followers, student section t-shirts and a music video with nearly 80,000 views.

“We always talk, and it’s fun to be able to talk and share stories,” Tyler says. “Cody loves it. It fits his personality.”

Cody Zeller is the big man on campus. And perhaps you’re going to be when you’re nearly seven-feet tall, and you’ve helped resurrect Hoosier basketball from its crimson ashes with victories against three top-five teams.

But just like high school, he doesn’t feel it. Instead, he fills out fake applications for Luke’s basketball ministry, the latest of which was the name of a prisoner with the penitentiary’s phone number listed as a reference.

“Pressure,” Luke says, “is something everyone else puts on him, not that he puts on himself…Cody has a great big-picture perspective of the world and at an age most people wouldn’t expect.”

That ranges from academic (in high school, Luke had a perfect 4.0 GPA, Tyler slacked with a 3.97, and Cody did okay with a 3.99) to social (Cody calls the spotlight a “blessing” because whatever he does will be all over Facebook and Twitter) and even spiritual.

Cody remembers being a freshman at Washington and watching his senior and North Carolina-bound brother Tyler make an impact far greater than bringing Washington its fifth state championship.

“Tyler was a nationally known guy, but he used his platform to further Christ’s Kingdom,” Cody says. “I kind of realized, ‘That could be me one day.’”

That “one day” is here. And Cody’s platform may be bigger than he expected. His 38,000 Twitter followers who have seen his Christian symbol avatar and Philippians 4:13 background is just an example.

“At the end of the day, we could have a lot of awards, but what’s the legacy we’re going to leave?” Luke says. “What’s the impact we’ll echo into eternity?”

Cody says he hit the “jackpot” playing at Indiana under head coach Tom Crean. The fourth-year Hoosier coach prays with the team before and after every game, schedules Sunday practices around morning worship and is constantly tweeting encouraging quotes from pastor Jack Graham, evangelist Joyce Meyer and church planter James MacDonald.

In a long one-on-one meeting, Crean told Cody it was important to not only improve on the hardwood but also improve in every aspect of life. He also stressed the importance of church, which Cody attends regularly with a handful of his teammates. Some Indiana students have caught on, too, and have attended Cody’s church to—at the very least—catch a glimpse of the 7-footer behind Indiana’s magical season.

That passion, Cody says, comes from his brothers.

Hoosier nation hopes “The Big Handsome” continues to follow his brothers’ footsteps. Because that means the projected No. 1 pick in the 2013 NBA Draft will—cough—stay all four seasons.

This story was published in the Vol. 26, No. 2, issue of Sports Spectrum magazine.