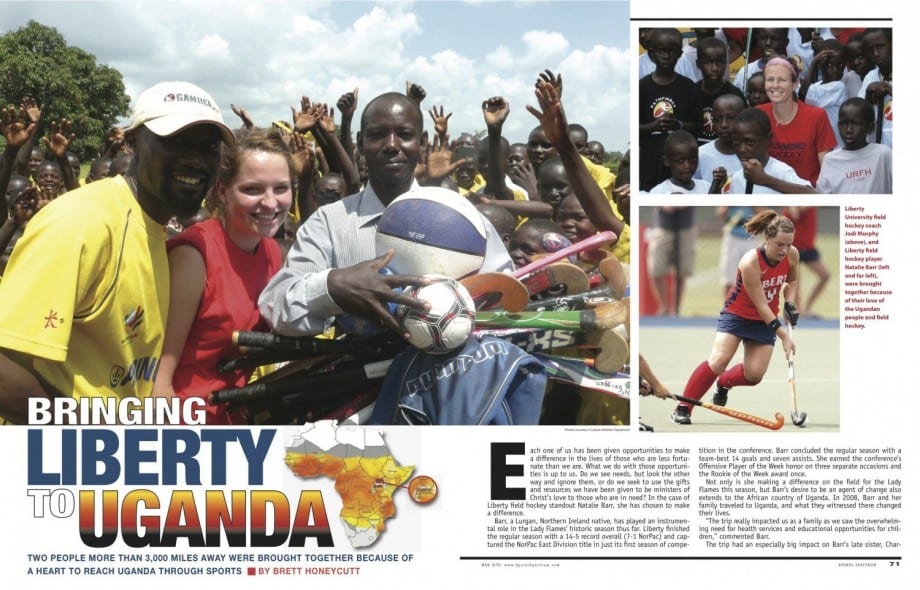 Jodi Murphy was recruiting another player when she found out about Natalie Barr.

That’s where she found out that her life intersected with Barr’s.

The beginnings of that connection, though, began two years prior, in the spring of 2010, when Liberty University announced that it was starting a women’s field hockey program.

“I had already been praying about the next steps for me in terms of coaching,” Murphy says. “I had been at the University of Richmond, then for six years, and I had been kind of itching to do something else. I knew right away that was an opportunity that the Lord had opened a door, so I sought that out.”

She interviewed and was given the job. Then came the process of recruiting players. She began looking for athletes who fit what Liberty stands for: Christians who want to play athletics at the NCAA Division I level, the highest in college.

After contacting a former coaching colleague from Northern Ireland, he gave Murphy a few names of potential players, one of whom was a good friend of Barr.

“I asked her if she knew someone who would want to come with her to make the transition a little bit lighter from the UK to the states, and at that point is when she began talking about Natalie,” Murphy says. “I mentioned to the girl one of the initiatives that I have is to continue to work with my non-profit out in Uganda, to do camps and clinics.

“She stopped there in the conversation, and said, ‘O my gosh, I can’t believe that. This family, the Barrs, they, too, have a non-profit in Uganda and they are looking to do more work, hockey-related, in the schools and in the capitol city.’ The Lord, it’s just amazing how He scripted the story. No one else could write it aside from Him.”

Both first visited Uganda in 2008, before they knew each other.

And both came away being impacted so much that they had to act.

Barr visited Uganda with her family, including her sister Charlene, who was born with cystic fibrosis and couldn’t compete in sports growing up.

After seeing that the people suffered from poor health conditions and poor education, and noticing that the children would not have survived her sickness had they been born with it, Charlene decided to focus her time raising money to build a school in Uganda – despite her health severely deteriorating after returning from Uganda.

That became the charity, Charlene’s Project.

When Charlene passed away, the family continued the charity and raised enough money to build the first school, Hidden Treasure, which opened in 2011.

They have been back to conduct field hockey camps and give away donated equipment to the children.

For Murphy, seeing the desperation of the people was also key in getting involved. Many families have been slaughtered by a Ugandan named Joseph Kony, and their orphaned children made to fight for Kony.

“When I first went, I was going with that burden on my heart just to get an understanding for what those people were going through, as Natalie said, to bring some fun lightheartedness, some activities to a people who had been suffering,” Murphy says. “Many kids who had lost parents, tons and tons of orphans that needed that love and attention. Like her when I got there, they filled me up so much and it was their joy…that really affected my heart. And I just came back, not with just a desire to return, but to return with something I loved and something the kids could latch onto…the Lord just really made a way for us to all use field hockey as a means to share and spread the gospel, but more than anything for them to pour into our lives and help us to see just how fortunate we are here in the states.”

That’s where the connection made sense.

“(Murphy) told me that it was not only the shared love for God and field hockey that has brought us together, but also our love for Uganda,” Barr, a native of Northern Ireland, told Dwayne Groff, a graduate assistant in the Liberty University Athletics Communications Office. “When I first heard about coming to America to play field hockey, I wasn’t really interested in it because I knew that I wanted to go to Uganda and teach. It was Coach Murphy’s link with Uganda that really got me interested in coming here.”

Once she visited Liberty, she was hooked.

“I came on a special visit (during Easter of 2012) and I really fell in love with Liberty,” says Barr.

But their interest didn’t stop with Uganda.

Making Liberty a competitive program, even in the Flames’ second year of existence, was also a goal.

This past season, Liberty finished 16-6 and won the NorPac Field Hockey Conference’s East Division title before making it to the title game against West Division winner Stanford. Though the Flames lost 3-0, finishing the season with a winning record and reaching the championship game were monumental achievements for such a young program.

Barr, a freshman midfielder, was also the East Division’s Offensive Player of the Year after finishing with 16 goals, and eight assists while ending up second in the NorPac in points per game (2.0) and third in goals per game (0.8). Both were 18th best in the country and her 16 goals were best in the nation by a freshman.

“God gives us all different talents, and different tasks,” Barr says. “We always want to win, but at the end of the day it’s a sport and it’s a game and there’s more important things in life, and I think that trying to use the talents and the gifts that God’s given you to give all the glory back, that’s really the way I live. After every game, we always pray and try to give the glory back to God to show that there is more to life than just the game.”

Indeed, there really is.