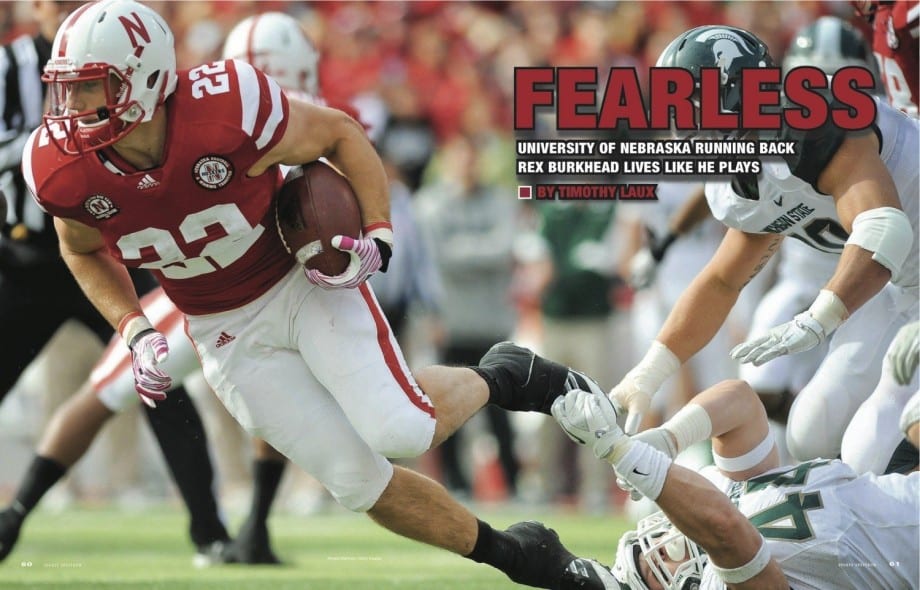 In senior Rex Burkhead, the Nebraska Cornhuskers have another outstanding I-back—and because of Burkhead’s relationship with Jesus Christ, they have a lot more.

His relationship with Christ has been reflected in his approach both to football and life. The more he has learned God can be trusted, the more confident he grows in whatever he does.

But Burkhead didn’t always have that outlook about faith, although he has always believed in God, and knew that faith in Him was helpful for life.

“I didn’t know what it meant to have a relationship with Him in Jesus Christ,” says Burkhead, a powerful-looking, 5-foot-11, 210-pound running back who is projected to be one of the top running backs in the upcoming NFL Draft.

When he attended a church retreat with friends during his sophomore year in high school, he received Christ as his Savior. Thus began the relationship.

“Since then, it’s been a journey,” he says. He grew a little as a Christian during high school and noticed he was surrounded by new temptations. “Right there I knew I needed something else of strength to hold on to, and that was my relationship with Christ.”

As he considered where to play college football, he realized that the culture at the University of Nebraska provided the best opportunity for him to grow in his relationship with Christ. When he arrived at the school, Christian teammates introduced him to opportunities for growth. He began attending Bible study, which he says sparked an interest to learn more of what God has to offer, especially the teachings in His Word.

What Burkhead was learning proved to be valuable, because he experienced highs and lows. He especially learned from the low of suffering a broken foot after five games in his freshman season, and he learned to maintain a positive attitude and trust in God.

“No matter what, He’s got a plan for you,” Burkhead says. “He’s got your life mapped out. Just have faith in Him that He’s going to take care of you.”

From the adversity, he also learned to make the most of his opportunities and glorify God in whatever he does. In the Holiday Bowl, Nebraska featured him in the Wildcat formation, where someone other than the quarterback takes the snap. He was productive, rushing for 89 yards on 17 carries and one touchdown as the Huskers routed Arizona, 33-0.

He continued to grow more productive during the next two seasons. In 2010 he rushed for 100 yards or more in three games, finishing with 951 yards on 172 carries and seven touchdowns. He also caught 15 passes for 148 yards. The following season, in 2011, he rushed for 1,357 yards (the most by a running back at Nebraska since 1997) on 284 carries and 15 touchdowns, and also caught 21 passes for 177 yards and a touchdown. Those numbers earned him first-team All-Big Ten.

This season, though, he has battled injuries. He sprained his left knee in the opener, a 49-20 win against Southern Mississippi, and then aggravated the injury two more times (against Northwestern and Ohio State). He missed eight games and left early in three others, but he was able to play the last regular season game (a 13-7 victory against Iowa), the Big Ten Championship (a 70-31 loss to Wisconsin), and the Capital One Bowl game (against SEC runner-up Georgia).

But Burkhead has increasingly endeared himself to others by running hard and decisively, and few can recall him fumbling more than three times in his career. Additionally, he is appreciated for his dedicated work ethic and his gracious, humble demeanor.

Although he is not known for breakaway speed, “he’s like a wild animal when he has the ball in his arms and uses that off-hand as a weapon,” Nebraska running backs coach Ron Brown says. “He plays the game with incredible enthusiasm, passion and with a fierce spirit.”

Burkhead says he approaches each play with a “fearless” attitude and lets his talents and instincts take charge. His teammates and position coach have noticed firsthand his passion for football, best illustrated by his work ethic and his leadership by example. “He’s gone above and beyond in terms of training, Brown says. “Anything that he can do to improve something in his game, he’s hungry to do it. He’s one of the most coachable guys I’ve ever seen.”

Perhaps Burkhead has most impacted others for Christ with his attitude of humility and servanthood. “Whatever helps the team, whatever helps us win games is what I want to do,” he says.

His versatility as an athlete certainly does not hurt. In addition to rushing he has made plays catching and throwing passes or executed a key block to create a big play. One of his most memorable plays was catching a short pass from Taylor Martinez in the comeback win over Ohio State in 2011. Martinez was being rushed and threw to Burkhead, who was able to evade the defender’s tackle with a little hop and then head to the end zone for the game-tying touchdown.

FCA staff member Robbie Trent has seen how God has used Burkhead, an Academic All-American, as well. “Rex is a guy that really desires to be an ambassador of Christ and to correctly handle the Word of Truth,” Trent says. “He definitely is desiring to reflect Christ in everything he does.”

Aaron Green, one of two talented sophomores, who trail Burkhead on the depth chart at I-back, sees Burkhead as a leader. “The best lesson I got from Rex is to go hard always, in all that I do,” he says. “Once you see him in the weight room and on practice, you know you got to go hard, because Rex brings it every day.”

In addition to simply playing for the Huskers, Burkhead, is continuing their tradition of great I-backs such as Roger Craig, Mike Rozier, Calvin Jones, Ahman Green, Roy Helu, Jr., etc. “It’s a privilege”to have such a platform, Burkhead says.

“I’ve appreciated Rex’s generosity with his time,” Trent says. “He has been more than generous,” to share his testimony, the Gospel with people in Nebraska.

Says Brown: “It’s an honor to have him in my room every day, to coach him, and he rubs off on everybody, including me.”

Timothy Laux is a freelance writer who lives in Nebraska.