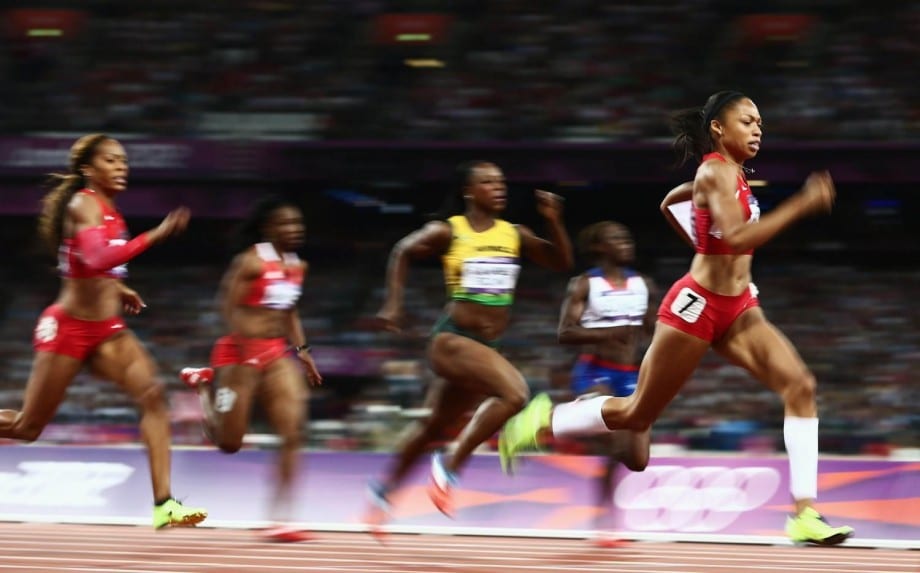 As Allyson Felix neared the finish of the 200 meters at the London Olympics this past summer, spectators could see that her goal would finally be reached.

When she crossed the line, she won her first Olympic gold medal in the 200 meters and erased the memories of the 2008 Beijing Olympics and 2004 Athens Olympics when she earned silver each time.

“My biggest defeats have come at the Olympic Games,” Felix told the Associated Press. “After Beijing I was devastated, I had worked as hard as possible, but I came up short. But I decided to rededicate myself even harder and it was a blessing in disguise. I was able to work harder than ever before and finally it all came together.”

“I was in tears in Beijing, and gosh, complete opposite tonight,” Felix said after winning gold in London. “For it all to come together is just extremely special, I’m overjoyed. I was just thinking, ‘Be aggressive. It’s the Olympics, anything can happen.’ I knew if I went out and ran my race it would come together. It felt good. I said ‘Thank you, Lord.’ It was relief, joy, just a flood of emotions.”

It took more than winning what some considered an elusive gold medal, though, to be named Sports Spectrum’s Female Athlete of the Year.

That gold medal was just one in a string of accomplishments by Felix in 2012, when she became the U.S. 200-meter champion, three-time Olympic gold medalist and the International Association of Athletics Federations Female World Athlete of the Year.

But it wasn’t only the hardware that she obtained; it was the manner in which she obtained it.

* Her 21.69 seconds in the 200 meters at the U.S. Championships made her the fourth fastest woman in history at that distance.

* The three gold medals were the most of any female track and field athlete in the Olympics since 1988, when Florence Griffith-Joyner accomplished the feat.

* The gold-medal winning 4×100-meter relay time of 40.82 seconds that she helped produce, along with Tianna Madison, Bianca Knight and Carmelita Jeter, broke a 27-year-old world record of 41.37 set by the vaunted East Germans.

* The whopping 0.55-second improvement to the world record in the 4×100-meter relay was the biggest improvement in that event in history and took down the third oldest women’s record in history.

* The time in the 4×400-meter relay, which featured DeeDee Trotter, Francena McCorory and Sanya Richards-Ross, of 3 minutes, 16.87 seconds, was the fifth fastest time in history and beat silver medalist Russia by 3.36 seconds, the largest margin of victory in the Olympics since 1976 when the East Germans beat the United States by 3.58 seconds.

* Felix’s relay split, a stunning 47.8 seconds, helped her become only the fifth woman in track and field history with a split faster than 48 seconds and the first non-Eastern Bloc woman to run under 48 seconds (the last time someone ran that fast was in 1988).

* Along with the IAAF Female Athlete of the Year, she also won the IAAF’s Female Performance of the Year along with Madison, Knight and Jeter for their world record in the 4×100-meter relay.

“It was pretty close to being a perfect race!” Felix said in Barcelona, Spain, on Nov. 24 when the quartet received the award. “We trusted each other in getting the stick around and we just had fun. We’re still letting it all sink in and we still can’t believe the performance. I think that we belong together now, and with the World Championships coming up I hope we’ll compete together again. There’s a possibility that it might not be the same four, but what we did in London, we’ll never forget that.”

On receiving the IAAF’s Female World Athlete of the Year award: “It’s so special,” said Felix. “I’ve always looked at the award for being the person who is at the top of their sport. To receive that recognition is just amazing to top off my year, I couldn’t ask for anything more.”

After standing for photos alongside Jamaica’s Usain Bolt, who won the IAAF’s Male World Athlete of the Year, Felix was asked how that felt.

“Very special,” she said. “I talked (to him) about when we came here before and we were both receiving “Rising Star” awards (in 2003), and so who would’ve thought that so many years later we would both be male and female athlete of the year, which is pretty cool.”

Felix’s success on the world scene began at an early age when she was still in high school.

Despite her continued success over a long stretch of time, some feel that Felix should be just as well known in the United States as Usain Bolt is known throughout the world.

Running Times Magazine Senior Writer Parker Morse said he “doesn’t know why she’s not the most famous female athlete in the country. She has a great attitude, great ethic and great performances. I’ve never met anyone with anything bad to say about her.”

Despite forgoing college after graduating from high school, Felix still earned a college degree in elementary education from Southern Cal in 2008 (following in the footsteps of her mom, Marlean, who is an elementary school teacher).

“I’m excited she’s getting recognition,” Paul, a New Testament professor at Master’s Seminary in Sun Valley, Calif. and an ordained minister told Sports Spectrum this past summer. “But my wife and I have always said that our greatest joy is to hear that our children, Wes and Allison, are walking in the truth. Go after winning a gold medal in your relationship with Him. In my mind, that’s far more important.”

Allyson Felix acknowledged that guidance and upbringing just before the Olympics.

“Growing up as a preacher’s kid has really grounded me,” Felix said in a USA Today story. “I’ve grown up with these amazing parents who are hard workers, and they truly live out their faith. They’ve been amazing role models for me. I feel like I really picked up on what they taught me and kept that with me all along in my running and in my career.

“For me, my faith is the reason I run. I definitely feel I have this amazing gift that God has blessed me with, and it’s all about using it to the best of my ability.”