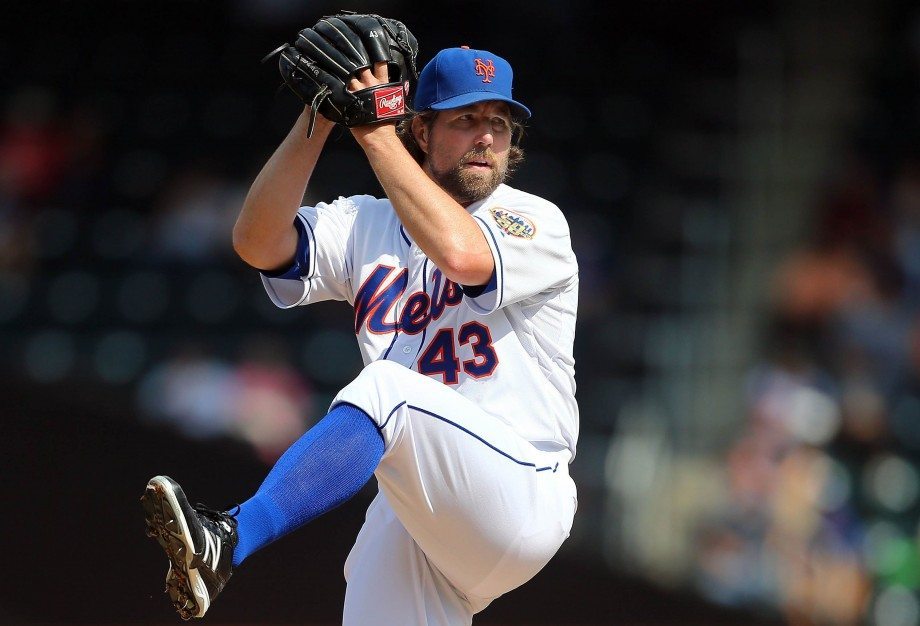 It’s only fitting R.A. Dickey’s memoir “Wherever I Wind Up” was released this past March, because where Dickey wound up in 2012, not many could have fathomed.

Dickey, the only knuckleballer in Major League Baseball, had 20 wins for the New York Mets, threw two consecutive one-hitters, led the National League in strikeouts (230), was second in ERA (2.73), and received the most prestigious pitching award in baseball, the National League Cy Young Award, at the age of 38, becoming the third-oldest first-time award winner in MLB history.

On the field, it has certainly been a long road for Dickey.

Fourteen years ago, Dickey was drafted first overall by the Texas Rangers, but his lifelong dream was ripped away when an x-ray revealed that Dickey was missing his ulna collateral ligament in his right elbow. Five years ago, he gave up a record six home runs in three innings, and Dickey realized that his baseball career had drastically stalled.

“I understood that what I had to offer wasn’t going to allow me to be a consistent major league pitcher,” Dickey told Sports Spectrum a year ago.

At the time, Dickey was using a knuckler as one of his secondary pitches, but his pitching coach at the time, Orel Hershiser, pushed him to use it full-time.

So he did. But it wasn’t easy.

“I had to unlearn things that I had learned in my previous 20 years of throwing a baseball,” he said. “I had to unlearn in an effort to relearn the proper mechanics of throwing a knuckleball. That was a really trying time; God was helping me to endure and persevere. I had a lot of self-doubt, I made a lot of bad decisions as far as what I put my time into.”

For four years, Dickey went up and down between Class AAA and major league clubs Texas, Milwaukee, Seattle and Minnesota, trying to master the knuckleball with varied success.

But in 2010, after being called up from AAA Buffalo in May, Dickey got an opportunity with the New York Mets, and this time pitched at career-high levels, going 11-9 with a 2.84 ERA (seventh in the National League).

And in 2011, he spent his first full season without a trip to the minors, posting a staff-best 3.28 ERA and logging a team high 208.2 innings for the Mets. In 2012, after a tumultuous 14 years in the league and dabbling in the minors, he won the National League Cy Young award.

“It’s been a real journey for me and it’s coincided with my journey as a knuckleballer starting in 2005,” he said. “…over the last four years, as an adult, from ages 32-36, I feel like I’ve really matured. God’s really grown me up in a lot of ways. He’s really impressed a lot of time and energy in helping me to feel loved and worthy and that’s been a big difference maker for me as far as my professional career has gone.”

And although what Dickey did factors into Sports Spectrum’s decision to name him Male Athlete of the Year, it’s more about what came from what he did, what came from his best year on the mound, what off-the-field impact he had because of his on-field stardom, that makes him one of the year’s most influential male athletes.

Dickey’s openness in “Wherever I Wind Up” about his troubled childhood—where he was sexually abused one summer by a 13-year-old girl who was babysitting him and later abused by a teenage boy—thrust him onto the national scale, giving him a voice at a time when many needed to hear it, a year where the horrific sexual abuse scandal at Penn State shocked the sporting world and parents across nation.

“I just keep my terrible secret,” Dickey wrote in his memoir, “keep it all inside, the details of what went on, and the hurt of a little boy who is scared and ashamed and believes he has done something terribly wrong, but doesn’t know what that is.”

Dickey is more than a baseball player. He’s a beacon of hope to the hurting, speaking openly about his darkest childhood memories to national media such as ESPN and Sports Illustrated. To the victimized and voiceless, like the poor souls at Penn State, Dickey is an inspiration and an encouragement. You can talk without shame, you can live a normal life, and you can even live a successful life, like winning the Cy Young.

Dickey also addressed his infidelity, thoughts of suicide, and his anguish of spending 14 years in the minors, overall providing a raw account of the struggles of a superstar, and all-in-all, life.

“Wherever I Wind Up” is far from an image-proofed, public relations project for financial gain. And perhaps that’s the other reason why Dickey is Sports Spectrum’s Male Athlete of the Year. Dickey is as real as they come. In a culture where Christians can be mistakenly viewed as perfect and legalistic, Dickey transparently talks about his sin and how Jesus Christ has changed him. He’s human. He’s a sinner. And he’s changed.

“I hope to communicate in the book that God is not a God of second chances,” Dickey told beliefnet.com. “He is a God of third, fourth, fifth and sixth chances. Consequently, I heard the voice, a myriad of times. (There’s) a place in the book where I talk about when (former Texas Ranger GM) Doug Melvin took away my signing bonus—not just my signing bonus—it was the hope of possibly never playing in the big leagues. You know I really wanted to erupt. Whether it was curse words or having a bad temper, I really felt God say, ‘I got you. Don’t do that. I got you. Everything is going to be OK.’ So I got up and walked out trying to be obedient to that voice. That was one instance.

“Another instance was when I tried to swim across the Missouri River and almost died. I was on the banks of the Missouri and happy to be alive. I felt God saying to me that my life was going to be different. I didn’t really know what that meant. But everything seemed to have more flavor to it and I was able to live in the moment like never before with my wife, with my children—with my career. That He had showed me a different way to live.”

Whether it’s his reflective memoir, his inspiring heroism in overcoming sexual abuse, his faith, or his off-season climb of Mount Kilimanjaro to raise funds to stop human trafficking in Mumbai, Dickey can be summed up in one word: impactful.

In 2012, Dickey inspired others to wind up in a better place.

Stephen Copeland and Aaron May are staff writers at Sports Spectrum magazine.