By Stephen Copeland Jan 24, 2013
Joel Parker was on his way back from the slopes. He pounded another beer and chucked the bottle out the sunroof of his Subaru station wagon. He pressed his foot on the accelerator, his friends laughing in the backseat, anxiously peering out the rear-window to see if the bottle struck a brand new car in the dealership parking lot... 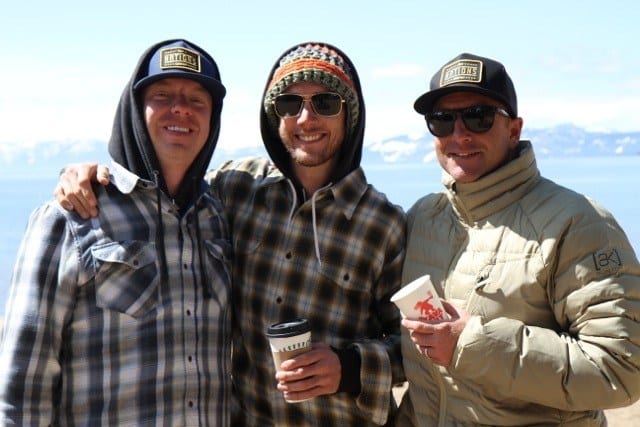 Lately, I’ve been thinking a lot about fish.

I wonder if they fantasize about leaving the water and living on land. Like, does a bluegill dream of one day working on Wall Street? Does he fantasize about walking down the streets of New York City with a briefcase and his morning coffee, answering emails and checking scores on his iPhone?

Outside a Pixar film idea, it’s kind of a strange thought. Why? Because fish are content and free in the water and have no desire to wear a suit or dabble in the stock market.

But there have been times in my life when I’ve felt like that fish. Religion, at times I have thought, is like water; it’s restricting. The high life, on the other hand, is land.

Joel Parker was on his way back from the slopes. He pounded another beer and chucked the bottle out the sunroof of his Subaru station wagon.

He pressed his foot on the accelerator, his friends laughing in the backseat, anxiously peering out the rear-window to see if the bottle struck a brand new car in the dealership parking lot.

“If we went to school the next day and didn’t have a story about something radical, insane, or bad we were doing, we weren’t living life,” Parker reflects. “That’s where we found adrenaline, excitement, and life…If I wasn’t going 100 mph with my hair on fire, I wasn’t happy.”

Parker never wore Nike. He wore Vans or Volcom. In eighth grade, he punched his teacher. In high school, he and his friends once stole a $500 snowboarding rack from a broken-down car on the way up to the mountain. He would sometimes get his “old, piece-of-junk” Subaru up to 110 miles per hour.

“I had been around Christians,” says Parker, who went to a Christian middle school and high school. “I just kind of assumed that religion was trying to make you better. I had more fun being bad than being good. I thought Christianity was all about being good and acting and behaving a certain way…I saw bondage.”

One day, Parker suffered a third-degree back sprain off a jump while snowboarding backcountry.

“I kept pushing it and pushing it,” Parker says. “I kept going as big as I could possibly go, and at some point, your body can’t take a landing from x amount of feet high.”

All around, his “no rules” mentality started betraying him. He was cooped up for a year without snowboarding; one of his friends impregnated a girl; two of his friends wound up paralyzed.

At 18 years old, with snowboarding stripped from his life, Parker found freedom in the very thing he had been running from.

“I used to see Christianity as conformity,” Parker says. “I wanted to be adventurous. I wanted to live life to its full. And, come to find out—John 10:10—Jesus is the one who does that.”

Now, at 35, Parker is the founder of Nations Foundation, a snowboarding ministry that tells stories through film and impacts thousands of snowboarders worldwide. Parker is going after the culture that nearly destroyed him.

“I know that culture is in bondage, and I know how enslaving the lifestyle becomes after a while,” Parker says. “I stand before you now 18 years later, and I’m free today. I have complete freedom in Jesus. I’m content as a person. Not trying to impress anybody. Not even trying to impress God. I’m just a guy who, every day, I’m trying to receive His grace even more and try to understand it even more. I really found life in Christ to be the most adventurous, freeing, transforming thing I’ve ever partaken in.”

If you’re at the crossroads of freedom or adventure, you should think about fish. Theologian Timothy Keller mentions in “The Reason for God” that fish are restricted to water, and yet, they thrive in the water.

We’re very comparable to fish, I think. We’re created by God and wired by God. God is our water. And, you can look at water as a restriction, but there’s nothing freeing, nor enjoyable about dying on land.

Ever find it weird that 95 percent of the underwater world remains unexplored? It makes me wish I could explore it. It makes me jealous of fish. The Christian life, I’ve found, is a lot like the ocean. It’s infinitely deep. It’s to be discovered.

Joel Parker challenges all of us to either start swimming or venture deeper.

This column appeared in the January 2013 Sports Spectrum DigiMag. Stephen Copeland is a staff writer and columnist at Sports Spectrum magazine. His column tackles sports and faith from another angle, whether it’s humorous, personal or controversial. Follow him on Twitter-@steve_copeland or email him at stephen.copeland@sportsspectrum.com.