Along for the Ride

By Joshua Cooley Feb 3, 2013
FOXBORO, MA - AUGUST 7: Coach John Harbaugh of the Baltimore Ravens smiles after a touchdown against the New England Patriots during a preseason game at Gillette Stadium on August 7, 2008 in Foxboro, Massachusetts. (Photo by Jim Rogash/Getty Images) 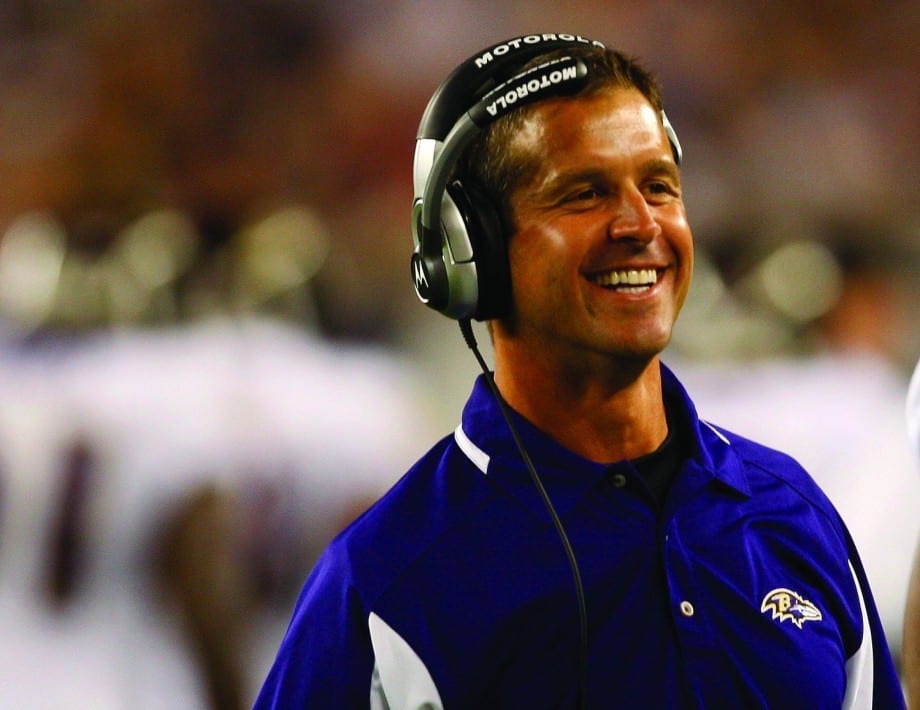 But this particular office—a spacious suite on the second floor of the Baltimore Ravens’ headquarters in Owings Mills, Md.—sent quite a different message. On the wall, next to Hello Kitty, was a “SpongeBob SquarePants” coloring sheet.

“You like that one?” says John Harbaugh, happily acknowledging a visitor’s question about his pretension-popping office décor, courtesy of his then 8-year-old daughter Alison. “That’s our TV show. We watch SpongeBob together every day. It’s a great show. You know, there are some good lessons in SpongeBob. They make fun of human frailties and stuff.”

Midnight was approaching, and the air had a bite to it—a typical late-winter night in Oxford, Ohio. But Harbaugh had a spring in his step as he walked—almost bouncing like Tigger in the Hundred Acre Wood—back to his dorm room.

In 2008, Harbaugh got his big chance when Ravens owner Steve Bisciotti hired him to replace Brian Billick despite Harbaugh’s lack of head coaching experience at any level. The gamble has paid off handsomely. With 13 victories and an AFC championship game appearance, the 2008 Ravens set an NFL record for most wins by a rookie head coach using a rookie quarterback (Joe Flacco). The 2009 Ravens reached the playoffs, too, finishing with 10 victories before losing to eventual Super Bowl runner-up Indianapolis. Baltimore lost in the divisional round in 2010 (Steelers), the AFC Championship in 2011 (Patriots), and earned their revenge in the 2012 AFC Championship against New England, as John Harbaugh reached the Super Bowl for his first time as a head coach.

“The biggest thing I’ve learned (this year) faith-wise is that God is in the driver’s seat,” Harbaugh told Sports Spectrum at Media Day in New Orleans. “That is what faith is. It’s the belief in the things that are unseen, that are uncertain, that we can’t be sure about. It’s a certain trust in life and in our Creator and God himself. I happen to be a Christian. That’s my faith. If you can do that, it brings you a peace. It brings you a certain peace that surpasses all understanding. I think if you have that, it gives you a chance to accomplish whatever it is you are supposed to accomplish.”

Harbaugh, it seems, has created some pretty high expectations. This, though, is silly talk to him.

“I’m not a goals guy,” Harbaugh continued at Media Day. “A lot of people talk about goals and networking and making a plan. I’m more of a guy who says, ‘I’m going to work hard every day and try to become something and whatever it is I’m supposed to become and see where that leads.’ And it’s worked out pretty well.”

In a league of dominant, type-A personalities who are driven by achievement, power and fame, Harbaugh, by God’s grace, is different. Sure, he burns to win—he describes himself as “a volatile, emotional kind of guy”—but he goes about it differently.

“What inspires me is my daughter and my wife,” Harbaugh told Sports Spectrum at Media Day. “I see my daughter growing up every single day and to me that is the most incredible miracle that there could ever be. We have a family atmosphere environment at our place. We have players and coaches bring their kids over anytime they want. That’s what inspires me. You see little kids running around, and you see your little daughter running around with those kids, and it just makes your heart bloom with joy. To me, that’s what it is all about.”

But with a little more contemplation, Harbaugh’s answer is quite telling. His profession is a breeding ground of vanity, intrigue and crafty speech. It’s a league where getting to—and staying at—the top often requires some deceit, often at others’ expense.