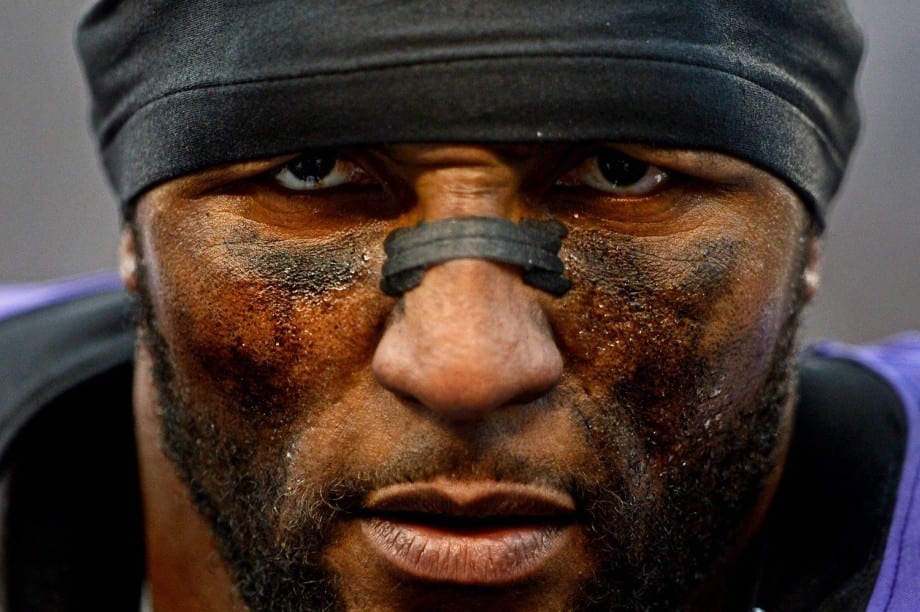 Some love him. Some hate him. Some say he has matured, born again, in a sense; others say he’s a womanizer (six children, four women) who got away with murder. All judgment and preconceived notions aside, however, there are certain things you cannot question about Ray Lewis: his leadership through action and inspiration through words. But don’t let us do the talking…

Lewis,known for wearing his faith on his sleeve, or, shirt, evidenced by the “Psalm 91” shirt he recently revealed, has never shied away from his faith.

“I tell them, trust me, don’t ever take my path. Don’t ever do it the way I did it, because everyone won’t make it. You got to be willing to walk in a storm. That’s what I tell people all the time. If there’s something in your life that you know needs changing, make sure you change it before God’s got to change it. Because if God’s got to change it, you ain’t going to like it.” (Lewis, on how his past mistakes provide a mentoring opportunity for his younger teammates, in a recent New York Times article written by William C. Rhoden.)

“I don’t believe [God] picks a winner or not. What I do believe is that if you give Him true credit to say ‘Whatever your will is, so be it.’..There’s irony in sports. There’s truth. If there’s a winner there’s a loser…But the bottom line is you never lose when your mind-set is whatever His will is, so be it. If you come out and give everything you got, that’s all you have to do. Whatever happens after that, it happens.”  (Lewis, on whether God cares about who wins and loses the Super Bowl, as quoted by Sports Spectrum at Super Bowl Media Day.)

“I know along my journey, a lot of people didn’t know that one of my driving forces was my grandmother, who is in the hospital and she is on life support right now. Every day, she asks me to promise her that I would bring her one more Super Bowl before she went home. Just to be able to give that to her, and I am always emotional any time when I talk to God. Just having that conversation with Him is so much different than having a conversation with anyone else. I do get emotional in times like that when it is at that point.” (Lewis, on how his emotional personality, as quoted by Sports Spectrum at Super Bowl Media Day.)

“Back then, I was a little bit more of a follower, because I hadn’t won a Super Bowl yet, and Shannon (Sharpe) was always trying to tell me what it felt like, what were the things you had to do, and the things you had to give up. So now, it’s different, because now I’m a leader going into this Super Bowl, and I have touched the confetti before. Now, there are a bunch of young guys sitting there and saying, ‘Oh my God, I don’t believe it’s real.’ And I’m like, ‘It’s real.’ So, now I am leading them into what this game is all about and what this 60 minutes is all about. I think that is the biggest difference. I was once a follower, and now I am a leader into this game.” (Lewis, on how he has changed between his last Super Bowl and this Super Bowl, as quoted by Sports Spectrum at Super Bowl Media Day.)

Lewis talks a big game; not everyone believes it. But is his Tebow-esqe vocality frowned upon because of his jaded past, or does his message lack authenticity? Is his preaching merely a facade to hide his guilt?

“It’s definitely all about him. Once a guy goes to the center of the field, goes into the victory formation on the last play of his last home game. I just don’t think the Giants or any organization I’ve ever been a part of, even growing up, would allow somebody to single themselves out like that. If you single yourself out after you make a play, that’s one thing. But to walk out on the field reminds me of the WWE, like The Rock coming out. You’re becoming a caricature of yourself. It’s exhausting. I don’t know why somebody would want that…If you want to say you’re Mr. Religious and all of that, have a clean record. Don’t say all of that stuff if you know there’s stuff that might come back. Those are the things that, when I look at him, I just think hypocrisy.” (Amani Toomer, former New York Giants wide receiver in a recent interview with USA Today Sports.)

“Stop acting like you are one of the people that come out of the Bible. If you’re redeemed—and he’s always quoting Scriptures—then you would have stood up like a man and said what happened.” (Greg Wilson, whose nephew Jacinth Baker died in the infamous Atlanta brawl 13 years ago that nearly destroyed Lewis’ career, as quoted in a recent CNN story.)

Those who know Lewis best believe his message is authentic and heartfelt. He’s admitted he has a dark past, but should that stop him from preaching? It didn’t stop Paul, the apostle. So why should it stop Ray Lewis?

“We are all ex something’s. Ex-drunks. Alcoholics. Womanizers. Whatever it is. He’s got a past. So what…He is the first one to say, ‘I didn’t always get it right.’” (Tatyana McCall, the mother of three of Lewis’ children who has known Lewis for half of her life and possibly better than anyone else and has also went separate ways with Lewis. McCall also told Orlando’s WKMG Local 6 that Lewis is caring, kind, sensitive, and has reinvented himself; she believes the Atlanta nightclub incident 13 years ago changed Lewis and led to him embracing his Christian faith.)

“He was the best defensive player on the field every game he played in. Off the field he was the best. He had this unique ability to resonate with every single person in the locker room. And that’s hard to do. In the NFL, unfortunately, sometimes the guy who is most productive has the loudest voice and that messaging is wrong. Well, that’s not the case with Ray. He is the most productive player but his messaging within the locker room is always right. There’s an intensity to him. That intensity is authentic. It’s genuine and it’s always directed at making the football organization better. … When I say he’s the best, really in my experience in the National Football League, I’ve never seen a person better than him at those three layers: preparation, leadership and play.” (ESPN analyst Trent Dilfer, who won a Super Bowl with Lewis and is also an outspoken believer.)

“We have already used him as our team chaplain so Ray could double up anytime he wants. He can coach; he can do whatever he wants. I think Ray’s got big plans. Ray’s that kind of guy and when he’s done playing he’s always a guy trying to affect people and change the way that people think and make an impact on the world. I’ve got a feeling he’s going to do that in some big ways.” (John Harbaugh, on whether Ray Lewis could be the team’s chaplain after he retires, as quoted by Sports Spectrum at Super Bowl Media Day.)

This story was put together by the Sports Spectrum staff.