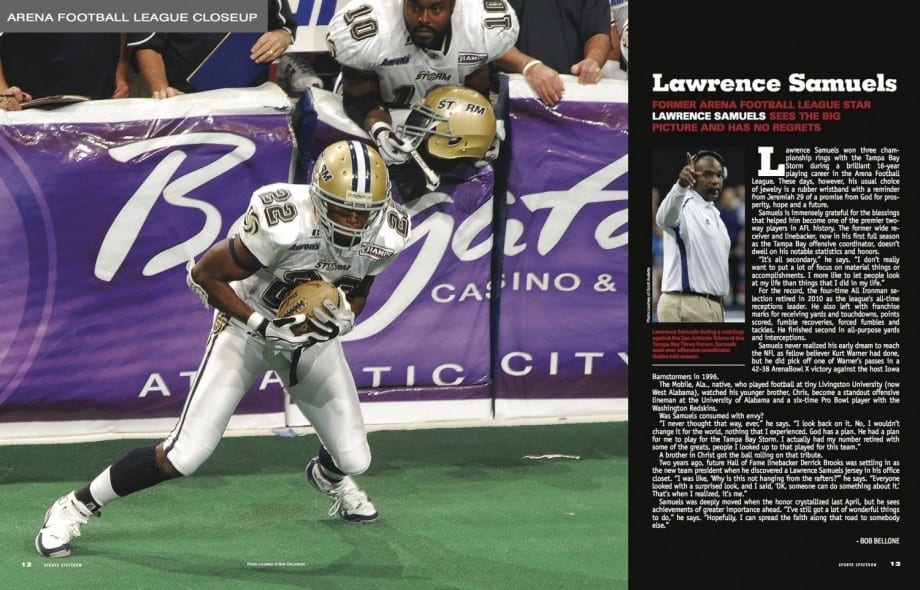 Lawrence Samuels won three championship rings with the Tampa Bay Storm during a brilliant 16-year playing career in the Arena Football League. These days, however, his usual choice of jewelry is a rubber wristband with a reminder from Jeremiah 29 of a promise from God for prosperity, hope and a future.

Samuels is immensely grateful for the blessings that helped him become one of the premier two-way players in AFL history. The former wide receiver and linebacker, now in his first full season as the Tampa Bay offensive coordinator, doesn’t dwell on his notable statistics and honors.

“It’s all secondary,” he says. “I don’t really want to put a lot of focus on material things or accomplishments. I more like to let people look at my life than things that I did in my life.”

For the record, the four-time All Ironman selection retired in 2010 as the league’s all-time receptions leader. He also left with franchise marks for receiving yards and touchdowns, points scored, fumble recoveries, forced fumbles and tackles. He finished second in all-purpose yards and interceptions.

Samuels never realized his early dream to reach the NFL as fellow believer Kurt Warner had done, but he did pick off one of Warner’s passes in a 42-38 ArenaBowl X victory against the host Iowa Barnstormers in 1996.

The Mobile, Ala., native, who played football at tiny Livingston University (now West Alabama), watched his younger brother, Chris, become a standout offensive lineman at the University of Alabama and a six-time Pro Bowl player with the Washington Redskins.

Was Samuels consumed with envy?

“I never thought that way, ever,” he says. “I look back on it. No, I wouldn’t change it for the world, nothing that I experienced. God has a plan. He had a plan for me to play for the Tampa Bay Storm. I actually had my number retired with some of the greats, people I looked up to that played for this team.”

A brother in Christ got the ball rolling on that tribute.

Two years ago, future Hall of Fame linebacker Derrick Brooks was settling in as the new team president when he discovered a Lawrence Samuels jersey in his office closet. “I was like, ‘Why is this not hanging from the rafters?’” he says. “Everyone looked with a surprised look, and I said, ‘OK, someone can do something about it.’ That’s when I realized, it’s me.”

Samuels was deeply moved when the honor crystallized last April, but he sees achievements of greater importance ahead. “I’ve still got a lot of wonderful things to do,” he says. “Hopefully, I can spread the faith along that road to somebody else.”