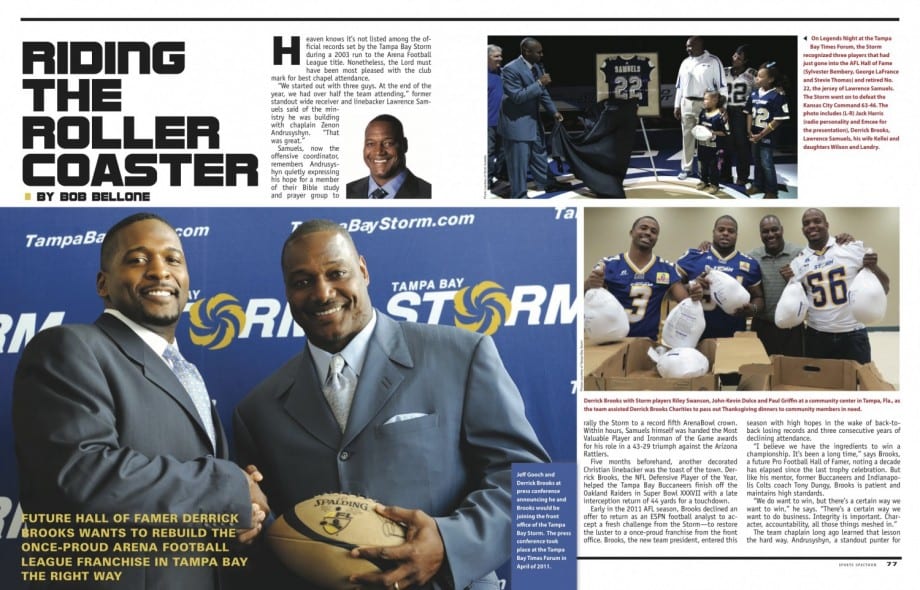 Heaven knows it’s not listed among the official records set by the Tampa Bay Storm during a 2003 run to the Arena Football League title. Nonetheless, the Lord must have been most pleased with the club mark for best chapel attendance.

“We started out with three guys. At the end of the year, we had over half the team attending,” former standout wide receiver and linebacker Lawrence Samuels said of the ministry he was building with chaplain Zenon Andrusyshyn. “That was great.”

Samuels, now the offensive coordinator, remembers Andrusyshyn quietly expressing his hope for a member of their Bible study and prayer group to rally the Storm to a record fifth ArenaBowl crown. Within hours, Samuels himself was handed the Most Valuable Player and Ironman of the Game awards for his role in a 43-29 triumph against the Arizona Rattlers.

Five months beforehand, another decorated Christian linebacker was the toast of the town. Derrick Brooks, the NFL Defensive Player of the Year, helped the Tampa Bay Buccaneers finish off the Oakland Raiders in Super Bowl XXXVII with a late interception return of 44 yards for a touchdown.

Early in the 2011 AFL season, Brooks declined an offer to return as an ESPN football analyst to accept a fresh challenge from the Storm—to restore the luster to a once-proud franchise from the front office. Brooks, the new team president, entered this season with high hopes in the wake of back-to-back losing records and three consecutive years of declining attendance. 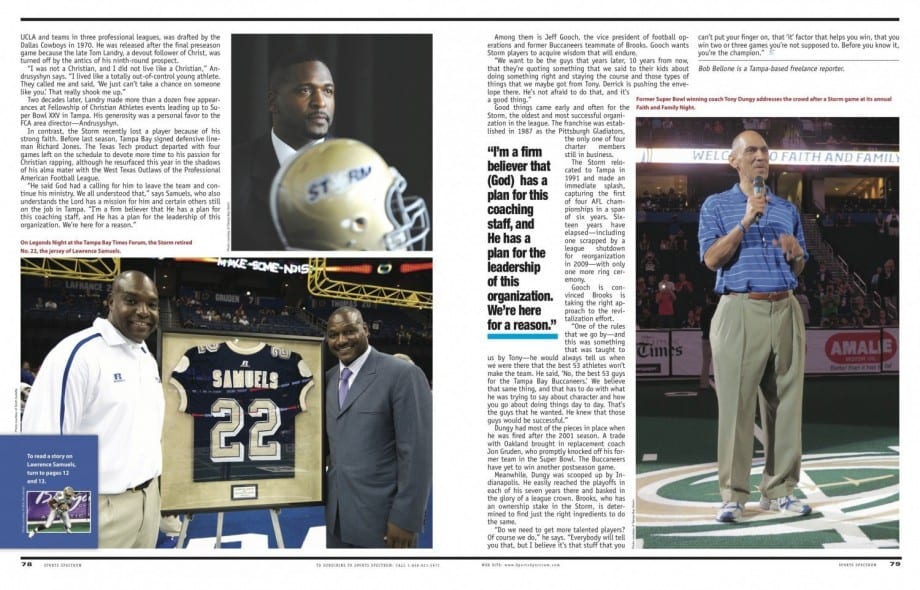 “I believe we have the ingredients to win a championship. It’s been a long time,” says Brooks, a future Pro Football Hall of Famer, noting a decade has elapsed since the last trophy celebration. But like his mentor, former Buccaneers and Indianapolis Colts coach Tony Dungy, Brooks is patient and maintains high standards.

The team chaplain long ago learned that lesson the hard way. Andrusyshyn, a standout punter for UCLA and teams in three professional leagues, was drafted by the Dallas Cowboys in 1970. He was released after the final preseason game because the late Tom Landry, a devout follower of Christ, was turned off by the antics of his ninth-round prospect.

“I was not a Christian, and I did not live like a Christian,” Andrusyshyn says. “I lived like a totally out-of-control young athlete. They called me and said, ‘We just can’t take a chance on someone like you.’ That really shook me up.”

Two decades later, Landry made more than a dozen free appearances at Fellowship of Christian Athletes events leading up to Super Bowl XXV in Tampa. His generosity was a personal favor to the FCA area director—Andrusyshyn.

In contrast, the Storm recently lost a player because of his strong faith. Before last season, Tampa Bay signed defensive lineman Richard Jones. The Texas Tech product departed with four games left on the schedule to devote more time to his passion for Christian rapping, although he resurfaced this year in the shadows of his alma mater with the West Texas Outlaws of the Professional American Football League.

“He said God had a calling for him to leave the team and continue his ministry. We all understood that,” says Samuels, who also understands the Lord has a mission for him and certain others still on the job in Tampa. “I’m a firm believer that He has a plan for this coaching staff, and He has a plan for the leadership of this organization. We’re here for a reason.”

Among them is Jeff Gooch, the vice president of football operations and former Buccaneers teammate of Brooks. Gooch wants Storm players to acquire wisdom that will endure.

“We want to be the guys that years later, 10 years from now, that they’re quoting something that we said to their kids about doing something right and staying the course and those types of things that we maybe got from Tony. Derrick is pushing the envelope there. He’s not afraid to do that, and it’s a good thing.”

Good things came early and often for the Storm, the oldest and most successful organization in the league. The franchise was established in 1987 as the Pittsburgh Gladiators, the only one of four charter members still in business.

The Storm relocated to Tampa in 1991 and made an immediate splash, capturing the first of four AFL championships in a span of six years. Sixteen years have elapsed—including one scrapped by a league shutdown for reorganization in 2009—with only one more ring ceremony.

Gooch is convinced Brooks is taking the right approach to the revitalization effort.

“One of the rules that we go by—and this was something that was taught to us by Tony—he would always tell us when we were there that the best 53 athletes won’t make the team. He said, ‘No, the best 53 guys for the Tampa Bay Buccaneers.’ We believe that same thing, and that has to do with what he was trying to say about character and how you go about doing things day to day. That’s the guys that he wanted. He knew that those guys would be successful.”

Dungy had most of the pieces in place when he was fired after the 2001 season. A trade with Oakland brought in replacement coach Jon Gruden, who promptly knocked off his former team in the Super Bowl. The Buccaneers have yet to win another postseason game.

Meanwhile, Dungy was scooped up by Indianapolis. He easily reached the playoffs in each of his seven years there and basked in the glory of a league crown. Brooks, who has an ownership stake in the Storm, is determined to find just the right ingredients to do the same.

“Do we need to get more talented players? Of course we do,” he says. “Everybody will tell you that, but I believe it’s that stuff that you can’t put your finger on, that ‘it’ factor that helps you win, that you win two or three games you’re not supposed to. Before you know it, you’re the champion.”