Where Are They Now? -- Charlotte Smith 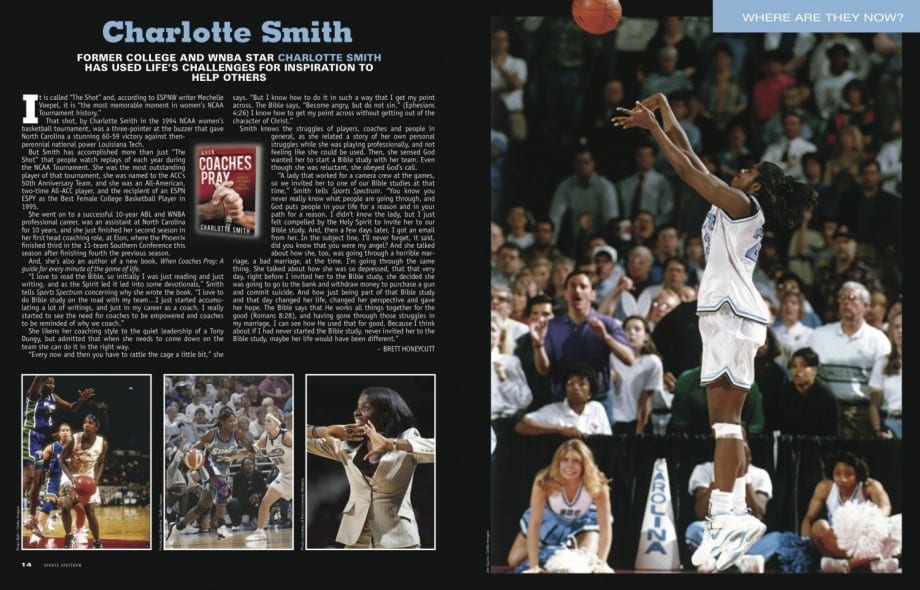 It is called “The Shot” and, according to ESPNW writer Mechelle Voepel, it is “the most memorable moment in women’s NCAA Tournament history.”

That shot, by Charlotte Smith in the 1994 NCAA women’s basketball tournament, was a three-pointer at the buzzer that gave North Carolina a stunning 60-59 victory against then-perennial national power Louisiana Tech.

But Smith has accomplished more than just “The Shot” that people watch replays of each year during the NCAA Tournament. She was the most outstanding player of that tournament, she was named to the ACC’s 50th Anniversary Team, and she was an All-American, two-time All-ACC player, and the recipient of an ESPN ESPY as the Best Female College Basketball Player in 1995.

She went on to a successful 10-year ABL and WNBA professional career, was an assistant at North Carolina for 10 years, and she just finished her second season in her first head coaching role, at Elon, where the Phoenix finished third in the 11-team Southern Conference this season after finishing fourth the previous season.

And, she’s also an author of a new book, When Coaches Pray: A guide for every minute of the game of life.

“I love to read the Bible, so initially I was just reading and just writing, and as the Spirit led it led into some devotionals,” Smith tells Sports Spectrum concerning why she wrote the book. “I love to do Bible study on the road with my team…I just started accumulating a lot of writings, and just in my career as a coach, I really started to see the need for coaches to be empowered and coaches to be reminded of why we coach.”

She likens her coaching style to the quiet leadership of a Tony Dungy, but admitted that when she needs to come down on the team she can do it in the right way.

Smith knows the struggles of players, coaches and people in general, as she related a story of her own personal struggles while she was playing professionally, and not feeling like she could be used. Then, she sensed God wanted her to start a Bible study with her team. Even though she was reluctant, she obeyed God’s call.

“A lady that worked for a camera crew at the games, so we invited her to one of our Bible studies at that time,” Smith tells Sports Spectrum. “You know you never really know what people are going through, and God puts people in your life for a reason and in your path for a reason. I didn’t know the lady, but I just felt compelled by the Holy Spirit to invite her to our Bible study. And, then a few days later, I got an email from her. In the subject line, I’ll never forget, it said, did you know that you were my angel? And she talked about how she, too, was going through a horrible marriage, a bad marriage, at the time. I’m going through the same thing. She talked about how she was so depressed, that that very day, right before I invited her to the Bible study, she decided she was going to go to the bank and withdraw money to purchase a gun and commit suicide. And how just being part of that Bible study and that day changed her life, changed her perspective and gave her hope. The Bible says that He works all things together for the good (Romans 8:28), and having gone through those struggles in my marriage, I can see how He used that for good. Because I think about if I had never started the Bible study, never invited her to the Bible study, maybe her life would have been different.”