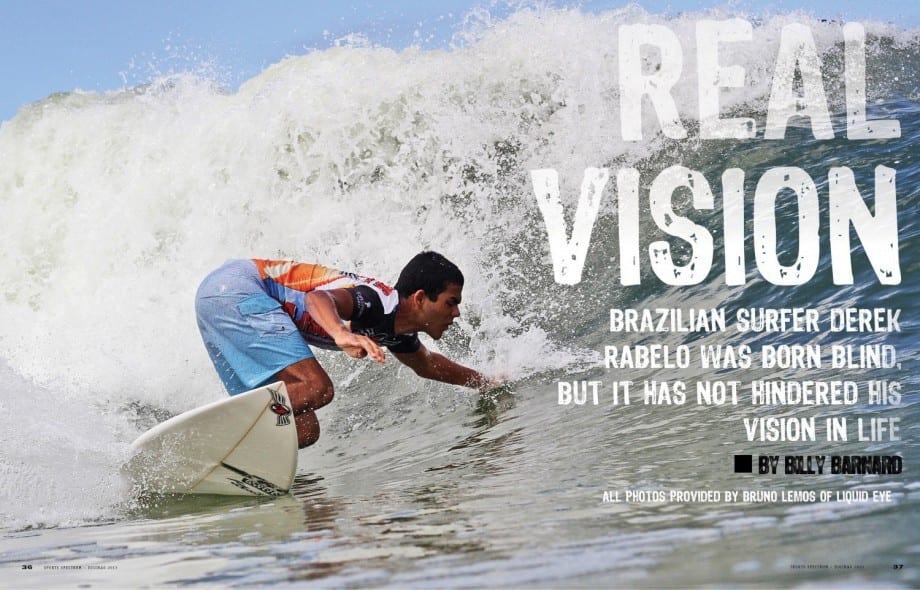 Leading up to this story, I have enjoyed watching the perplexed look on people’s faces after sharing my latest subject matter with them. Most recently, I nonchalantly told my doctor, while he was busy writing down notes, that I was writing a story about a blind surfer. He continued writing for a few seconds before dropping his pen, looking up quizzically, and asked, “Wait. What? He surfs blind? How is that even possible?”

Ah, yes. The question that everyone who hears about Derek Rabelo eventually ends up asking.

Consider how difficult a feat this is. The playing field for a surfer is constantly changing as it shifts along the different bottom contours of the ocean. Three-time World Champion Tom Curren mused about what it must be like. He says he could possibly imagine a blind person surfing who had surfed before losing his or her sight. “But,” he admitted, “to actually be blind from the start—that’s what I’m totally baffled by.”

In fact, when I first heard about Rabelo, I couldn’t even envision him doing what I define as “real” surfing. Instead, I thought he was probably just jumping up on his surfboard in the white wash near the shore and merely going straight. But when I finally saw the YouTube video for myself, I was flat-out shocked.  Rabelo was not only descending down the face of some good size swells, but actually turning off the bottom of the wave and positioning the board so he could continue to follow the line of the break.

When I ran into Derek on his visit to San Diego, Calif., his story continued to intrigue me as I learned more about his incredible journey.

Nineteen years ago in Guarapi, Brazil, Rabelo’s father had aspirations that one day he would have a son who would become a professional surfer. In anticipation of this dream, he had already named his soon-to-be son after famous Hawaiian surfer Derek Ho.  Unfortunately the child was born blind, leaving the Rabelo clan crushed. Surely there would be no days of sharing surfing with his son, let alone a professional career.

But as he grew up on the sands of his local beach, Rabelo listened to his relatives and friends share their excitement after catching incredible waves. He began to picture in his mind what it must be like to surf. When he finally shared his desire to try it at the age of sixteen, his family didn’t discount him, but encouraged him to go for it. Heeding their advice that he would need to be physically equipped, he began working out intensely and practicing Jujitsu in preparation of the surf. A few months later and with history in the making, news cameras from all over Brazil came to verify the story that a blind boy was indeed surfing. 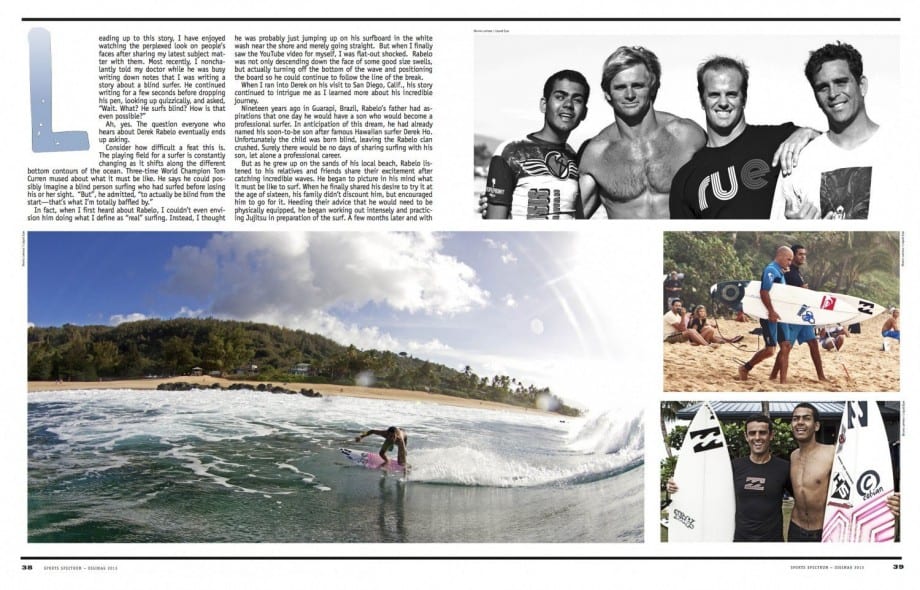 The story would be amazing enough if it had ended right there on this tiny coastal town in Brazil. Even though Rabelo had already captured the imagination of so many in his native land, his exploits in the ocean only served to further fuel his own dreams of what was possible. With only two years of surfing experience, he now wanted to challenge arguably the world’s most dangerous wave: The infamous Banzai Pipeline.

So in February 2012, he set out for the North Shore of Hawaii, a place where surfers have broken their necks and given their lives in pursuit of the most intense adrenaline rushes the planet has to offer. Paddling out into the hectic surf with a couple of friends, his first attempt was hugely disappointing.  The immense crowd, largely oblivious to Rabelo’s condition, did not allow him to catch a single wave.

But Rabelo hadn’t traveled half way around the world to cave in and give up his dream. Meeting some friends at a local church, he acquired the help of some of the Pipeline locals such as pro surfer Makua Rothman to clear a path for him out in the lineup. The next day, the upper echelon of the surfing world witnessed a blind person, not only make steep drops over the sharp reef, but turn up into the pocket and come close to getting in the barrel. The locals here at Pipeline don’t easily impress, but Rabelo’s performance left everyone astonished.  Rothman, who himself has tackled 50-foot plus surf, was utterly slack-jawed, exclaiming, “I was tripping out because I never told him where the white wash was coming and he ducked dived the waves with perfect timing. I was like, ‘Are you kidding me?’  This guy is my new hero! Unbelievable.”

With observers on the beach blown away by what they had seen, Derek Rabelo offered up a giant smile before finally giving us the answer as to how he does it: “Faith to me is to believe that the impossible for man is possible with God.”

It was this provocative yet child-like faith that grabbed the attention of former pro surfer and filmmaker Bryan Jennings. (If the name sounds familiar, Jennings created a documentary about Bethany Hamilton that led to the feature film Soul Surfer.) Jennings knew Rabelo’s story had to be told and is currently producing a documentary called Beyond Sight. During a recent filming, Jennings suggested to Derek that they could go attempt to surf the 60-80 foot mountainous waves of the famous break Jaws in Maui. “I was kidding, but he got all excited and said, ‘Yeah.’ Jennings recalled and laughed.  This guy is nuts. He has zero fear.” 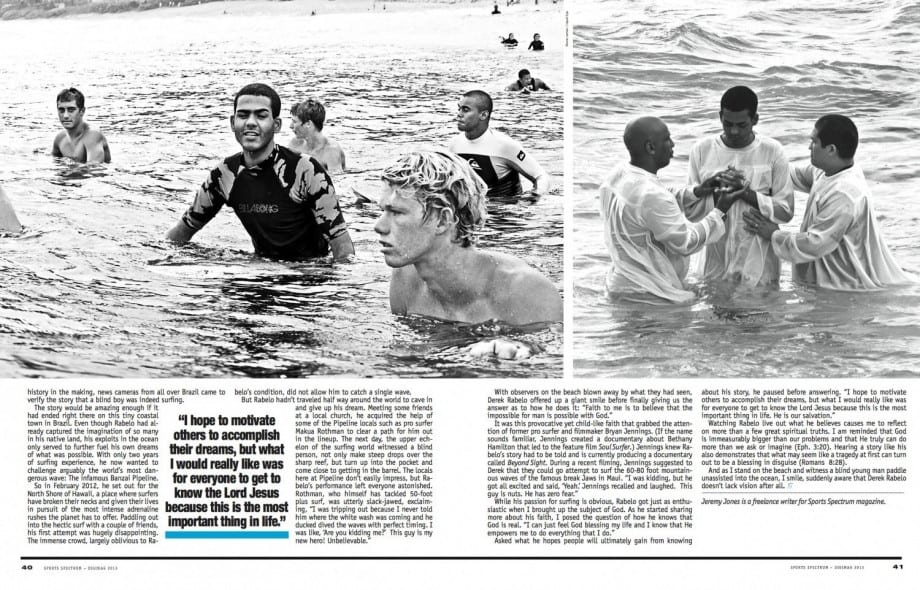 While his passion for surfing is obvious, Rabelo got just as enthusiastic when I brought up the subject of God. As he started sharing more about his faith, I posed the question of how he knows that God is real. “I can just feel God blessing my life and I know that He empowers me to do everything that I do.”

Asked what he hopes people will ultimately gain from knowing about his story, he paused before answering. “I hope to motivate others to accomplish their dreams, but what I would really like was for everyone to get to know the Lord Jesus because this is the most important thing in life. He is our salvation.”

Watching Rabelo live out what he believes causes me to reflect on more than a few great spiritual truths. I am reminded that God is immeasurably bigger than our problems and that He truly can do more than we ask or imagine (Eph. 3:20). Hearing a story like his also demonstrates that what may seem like a tragedy at first can turn out to be a blessing in disguise (Romans  8:28).

And as I stand on the beach and witness a blind young man paddle unassisted into the ocean, I smile, suddenly aware that Derek Rabelo doesn’t lack vision after all.

Billy Barnard is a freelance writer for Sports Spectrum magazine.