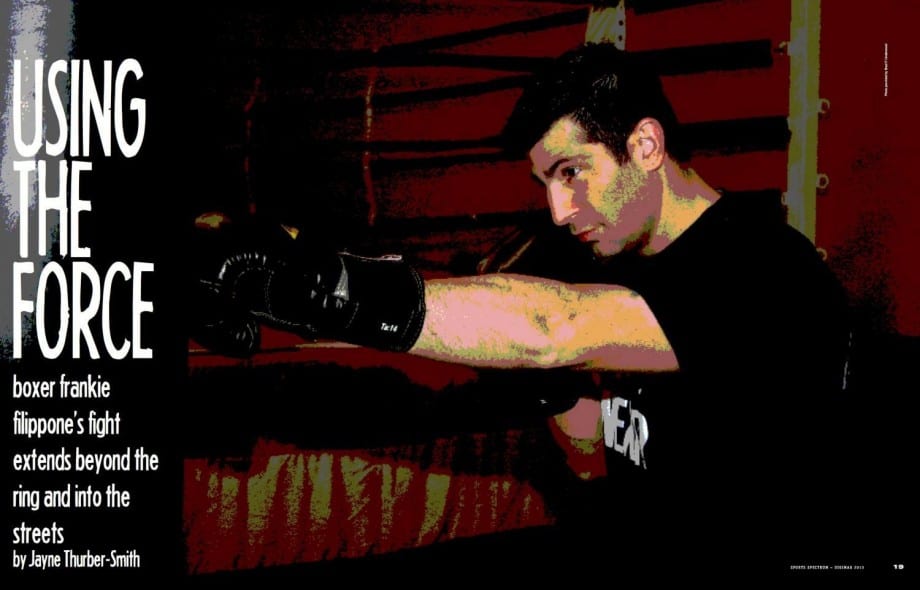 Watching Frankie “The Freight Train” Filippone fighting in the ring or protecting the streets of Virginia Beach can be an intimidating sight. Those who know the real Frank Filippone Jr., know that under his tough exterior is a heart of gold. He never misses a chance to use both his boxing and his badge for all the good he can.

The 33-year-old Chesapeake, Va., resident has been a police officer for 10 years and boxing professionally for five. He lives his life by two constants.

“My motto as a boxer is ‘keep punching,’” he says. “No matter what, I keep fighting. And my motto as a police officer is ‘Try to save a life before you take a life.’”

Filippone is all about saving lives. He wants to make a difference in the lives of the teenagers who find themselves in the back of his police car. He wants to see them living meaningful lives instead of wasting away in prison.

“Being both a boxer and policeman allows me to break through some barriers,” says Filippone. “The kids on the street look at the police force as the enemy. But they can relate to my boxing. With boxing they see an accomplishment they respect.”

In February of this year, Filippone’s name became a little better known in the boxing world when he stepped in as a last-minute participant for the injured Dennis Hasson. He won the North American Boxing Association (NABA) Light Heavyweight title by a 10-round decision in Wilmington, Del. It was the biggest win in the southpaw’s career so far.

He makes the most of every opportunity, so when he was asked to take the fight on with less than a week’s notice, Filippone didn’t hesitate.

“When they called us on a Sunday about fighting Friday, I told my boxing trainer, Kenny Miller, ‘I’ve been waiting for this for 15 years, let’s go for it!’” Filippone says, his face lighting up. “I was in shape, but there’s a difference between being ‘in shape’ and ‘in fight shape.’ So we trained really hard for three days, then went up to Wilmington.”

He notes that he tries to eat healthy for the most part, but likes to follow a very strict diet at least two weeks prior to a big fight.

“I try to stick to chicken breast, sweet potato and vegetable suppers,” he says, “and I’ll just drink water, cut down on sodium. Breakfast is old fashioned, steel-cut oats with milk, and blueberries or maybe some honey for sweetening. You can’t cheat yourself, you have to treat yourself!”

He credits his personal trainer, Craig Hamilton, for helping to keep him in shape physically, mentally and spiritually.

“Craig is a very strong Christian,” says Filippone. “I am grateful to him for devoting his time and advice to me.” 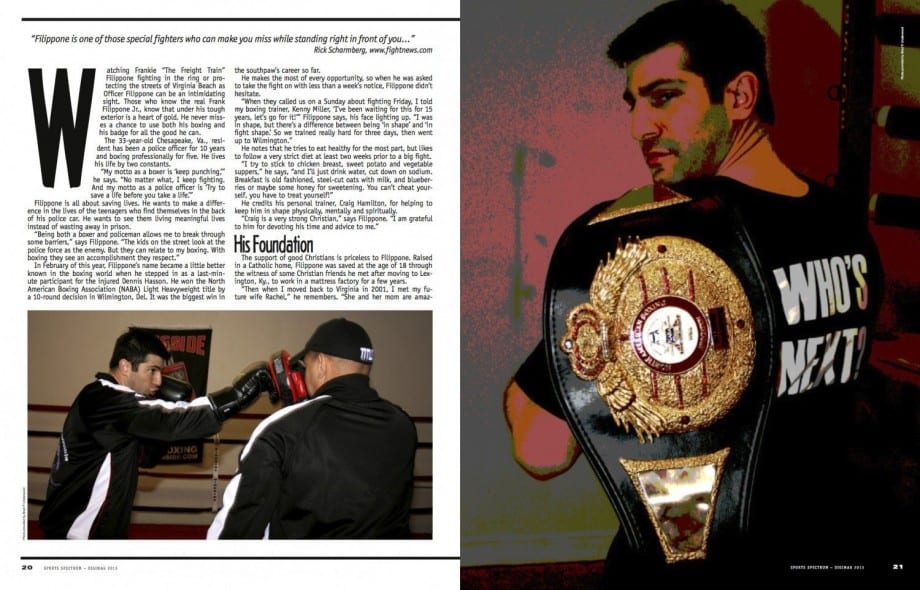 The support of good Christians is priceless to Filippone. Raised in a Catholic home, Filippone was saved at the age of 18 through the witness of some Christian friends he met after moving to Lexington, Ky., to work in a mattress factory for a few years.

“Then when I moved back to Virginia in 2001, I met my future wife Rachel,” he remembers. “She and her mom are amazing Christians. They helped me work out some things. I knew the right things to do but wasn’t really following it through. We were married in 2005. A few years later we started attending River Oak Church and I was baptized there in 2009. I had gone to other churches, but when I came out of that water it was a new beginning. Just being there with my pastor and other fellow Christians who were so welcoming, that changed my outlook. I fell in love with my church.”

He’s not only a strong Christian; Filippone’s also a great dad. When he had to go to Wilmington for the big fight, Rachel remained at home in Virginia because they have two children, who at the time each had a birthday that needed to be celebrated. Even though he had an important fight to focus on, he took time out on each special day to join in their celebrations.

“Our daughter, Avery, turned 5 on February 7th and our son Drew turned 2 on the 8th!” Filippone smiles. “So I put on my party hat and blew my noisemaker in my hotel room, and hung out with the kids on FaceTime.” 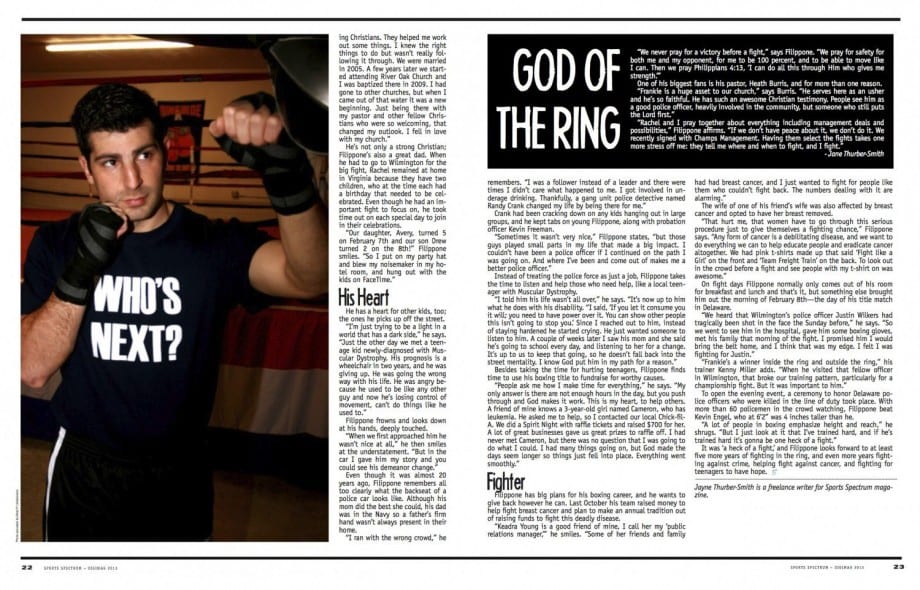 He has a heart for other kids, too; the ones he picks up off the street.

“I’m just trying to be a light in a world that has a dark side,” he says. “Just the other day we met a teenage kid newly-diagnosed with Muscular Dystrophy. His prognosis is a wheelchair in two years, and he was giving up. He was going the wrong way with his life. He was angry because he used to be like any other guy and now he’s losing control of movement, can’t do things like he used to.”

Filippone frowns and looks down at his hands, deeply touched.

“When we first approached him he wasn’t nice at all,” he then smiles at the understatement. “But in the car I gave him my story and you could see his demeanor change.”

Even though it was almost 20 years ago, Filippone remembers all too clearly what the backseat of a police car looks like. Although his mom did the best she could, his dad was in the Navy so a father’s firm hand wasn’t always present in their home.

“I ran with the wrong crowd,” he remembers. “I was a follower instead of a leader and there were times I didn’t care what happened to me. I got involved in underage drinking. Thankfully, a gang unit police detective named Randy Crank changed my life by being there for me.”

Crank had been cracking down on any kids hanging out in large groups, and he kept tabs on young Filippone, along with probation officer Kevin Freeman.

“Sometimes it wasn’t very nice,” Filippone states, “but those guys played small parts in my life that made a big impact. I couldn’t have been a police officer if I continued on the path I was going on. And where I’ve been and come out of makes me a better police officer.”

Instead of treating the police force as just a job, Filippone takes the time to listen and help those who need help, like a local teenager with Muscular Dystrophy.

“I told him his life wasn’t all over,” he says. “It’s now up to him what he does with his disability. “I said, ‘If you let it consume you it will; you need to have power over it. You can show other people this isn’t going to stop you.’ Since I reached out to him, instead of staying hardened he started crying. He just wanted someone to listen to him. A couple of weeks later I saw his mom and she said he’s going to school every day, and listening to her for a change. It’s up to us to keep that going, so he doesn’t fall back into the street mentality. I know God put him in my path for a reason.”

Besides taking the time for hurting teenagers, Filippone finds time to use his boxing title to fundraise for worthy causes.

“People ask me how I make time for everything,” he says. “My only answer is there are not enough hours in the day, but you push through and God makes it work. This is my heart, to help others. A friend of mine knows a 3-year-old girl named Cameron, who has leukemia. He asked me to help, so I contacted our local Chick-fil-A. We did a Spirit Night with raffle tickets and raised $700 for her. A lot of great businesses gave us great prizes to raffle off. I had never met Cameron, but there was no question that I was going to do what I could. I had many things going on, but God made the days seem longer so things just fell into place. Everything went smoothly.”

Filippone has big plans for his boxing career, and he wants to give back however he can. Last October his team raised money to help fight breast cancer and plan to make an annual tradition out of raising funds to fight this deadly disease.

“Keadra Young is a good friend of mine, I call her my ‘public relations manager,’” he smiles. “Some of her friends and family had had breast cancer, and I just wanted to fight for people like them who couldn’t fight back. The numbers dealing with it are alarming.”

The wife of one of his friend’s wife was also affected by breast cancer and opted to have her breast removed.

“That hurt me, that women have to go through this serious procedure just to give themselves a fighting chance,” Filippone says. “Any form of cancer is a debilitating disease, and we want to do everything we can to help educate people and eradicate cancer altogether. We had pink t-shirts made up that said ‘Fight like a Girl’ on the front and ‘Team Freight Train’ on the back. To look out in the crowd before a fight and see people with my t-shirt on was awesome.”

On fight days Filippone normally only comes out of his room for breakfast and lunch and that’s it, but something else brought him out the morning of February 8th—the day of his title match in Delaware.

“We heard that Wilmington’s police officer Justin Wilkers had tragically been shot in the face the Sunday before,” he says. “So we went to see him in the hospital, gave him some boxing gloves, met his family that morning of the fight. I promised him I would bring the belt home, and I think that was my edge. I felt I was fighting for Justin.”

“Frankie’s a winner inside the ring and outside the ring,” his trainer Kenny Miller adds. “When he visited that fellow officer in Wilmington, that broke our training pattern, particularly for a championship fight. But it was important to him.”

To open the evening event, a ceremony to honor Delaware police officers who were killed in the line of duty took place. With more than 60 policemen in the crowd watching, Filippone beat Kevin Engel, who at 6’2” was 4 inches taller than he.

“A lot of people in boxing emphasize height and reach,” he shrugs. “But I just look at it that I’ve trained hard, and if he’s trained hard it’s gonna be one heck of a fight.”

It was ‘a heck of a fight,’ and Filippone looks forward to at least five more years of fighting in the ring, and even more years fighting against crime, helping fight against cancer, and fighting for teenagers to have hope.

Jayne Thurber-Smith is a freelance writer for Sports Spectrum magazine.