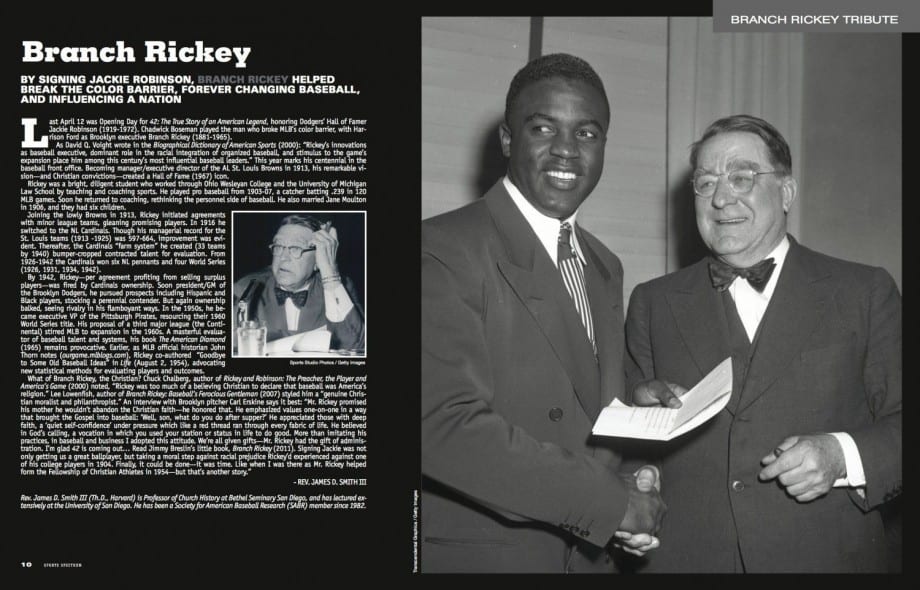 As David Q. Voight wrote in the Biographical Dictionary of American Sports (2000): “Rickey’s innovations as baseball executive, dominant role in the racial integration of organized baseball, and stimulus to the game’s expansion place him among this century’s most influential baseball leaders.” This year marks his centennial in the baseball front office. Becoming manager/executive director of the AL St. Louis Browns in 1913, his remarkable vision—and Christian convictions—created a Hall of Fame (1967) icon.

Rickey was a bright, diligent student who worked through Ohio Wesleyan College and the University of Michigan Law School by teaching and coaching sports. He played pro baseball from 1903-07, a catcher batting .239 in 120 MLB games. Soon he returned to coaching, rethinking the personnel side of baseball. He also married Jane Moulton in 1906, and they had six children.

By 1942, Rickey—per agreement profiting from selling surplus players—was fired by Cardinals ownership. Soon president/GM of the Brooklyn Dodgers, he pursued prospects including Hispanic and Black players, stocking a perennial contender. But again ownership balked, seeing rivalry in his flamboyant ways. In the 1950s, he became executive VP of the Pittsburgh Pirates, resourcing their 1960 World Series title. His proposal of a third major league (the Continental) stirred MLB to expansion in the 1960s. A masterful evaluator of baseball talent and systems, his book The American Diamond (1965) remains provocative. Earlier, as MLB official historian John Thorn notes (ourgame.mlblogs.com), Rickey co-authored  “Goodbye to Some Old Baseball Ideas” in Life (August 2, 1954), advocating new statistical methods for evaluating players and outcomes.

What of Branch Rickey, the Christian? Chuck Chalberg, author of Rickey and Robinson: The Preacher, the Player and America’s Game (2000) noted, “Rickey was too much of a believing Christian to declare that baseball was America’s religion.” Lee Lowenfish, author of Branch Rickey: Baseball’s Ferocious Gentleman (2007) styled him a “genuine Christian moralist and philanthropist.” An interview with Brooklyn pitcher Carl Erskine says it best: “Mr. Rickey promised his mother he wouldn’t abandon the Christian faith—he honored that. He emphasized values one-on-one in a way that brought the Gospel into baseball: ‘Well, son, what do you do after supper?’ He appreciated those with deep faith, a ‘quiet self-confidence’ under pressure which like a red thread ran through every fabric of life. He believed in God’s calling, a vocation in which you used your station or status in life to do good. More than imitating his practices, in baseball and business I adopted this attitude. We’re all given gifts—Mr. Rickey had the gift of administration. I’m glad 42 is coming out… Read Jimmy Breslin’s little book, Branch Rickey (2011). Signing Jackie was not only getting us a great ballplayer, but taking a moral step against racial prejudice Rickey’d experienced against one of his college players in 1904. Finally, it could be done—it was time. Like when I was there as Mr. Rickey helped form the Fellowship of Christian Athletes in 1954—but that’s another story.”