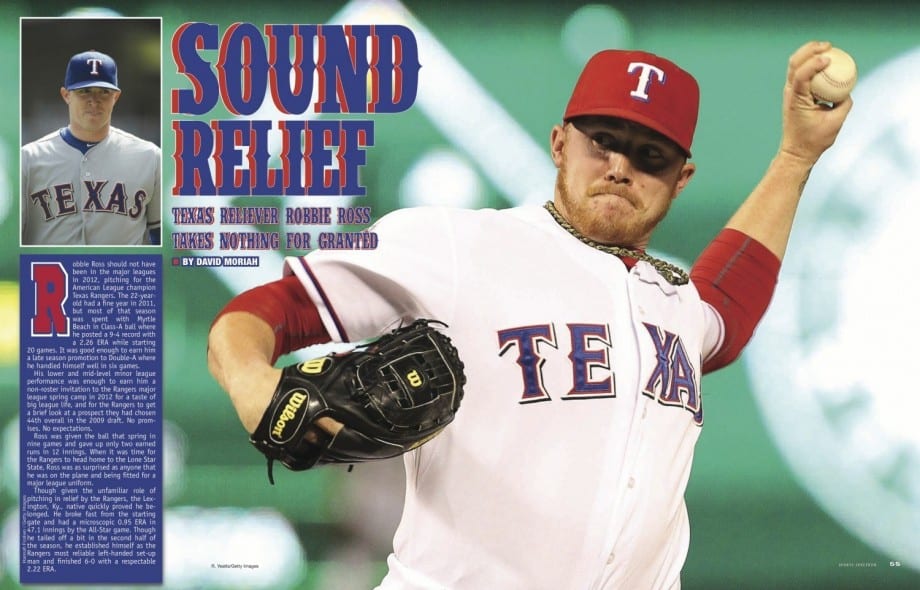 Robbie Ross should not have been in the major leagues in 2012, pitching for the American League champion Texas Rangers. The 22-year-old had a fine year in 2011, but most of that season was spent with Myrtle Beach in Class-A ball where he posted a 9-4 record with a 2.26 ERA while starting 20 games. It was good enough to earn him a late season promotion to Double-A where he handled himself well in six games.

His lower and mid-level minor league performance was enough to earn him a non-roster invitation to the Rangers major league spring camp in 2012 for a taste of big league life, and for the Rangers to get a brief look at a prospect they had chosen 44th overall in the 2009 draft. No promises. No expectations.

Ross was given the ball that spring in nine games and gave up only two earned runs in 12 innings. When it was time for the Rangers to head home to the Lone Star State, Ross was as surprised as anyone that he was on the plane and being fitted for a major league uniform.

Though given the unfamiliar role of pitching in relief by the Rangers, the Lexington, Ky., native quickly proved he belonged. He broke fast from the starting gate and had a microscopic 0.95 ERA in 47.1 innings by the All-Star game. Though he tailed off a bit in the second half of the season, he established himself as the Rangers most reliable left-handed set-up man and finished 6-0 with a respectable 2.22 ERA.

This spring, Ross’s seat on the plane back to Texas was secure, and he took time out to tell Sports Spectrum what the previous 12 months had been like.

“It’s been awesome,” Ross enthused. “It’s been a blessing because I never expected to have this much success and I thank God for it every day. I think what I have to remember and be thankful for is that it can go away at any point. I don’t want to take it for granted.”

Ross first came to the attention of a Sports Spectrum reporter during spring training in 2012. The writer wondered who the player was in the Rangers uniform taking time to sign autographs for everyone in a mob of dozens, if not hundreds of fans, at the same time when most other players were signing a few and hustling away. The reporter also noticed the player not only signed his name but added Mark 9:23 to each autograph he signed. 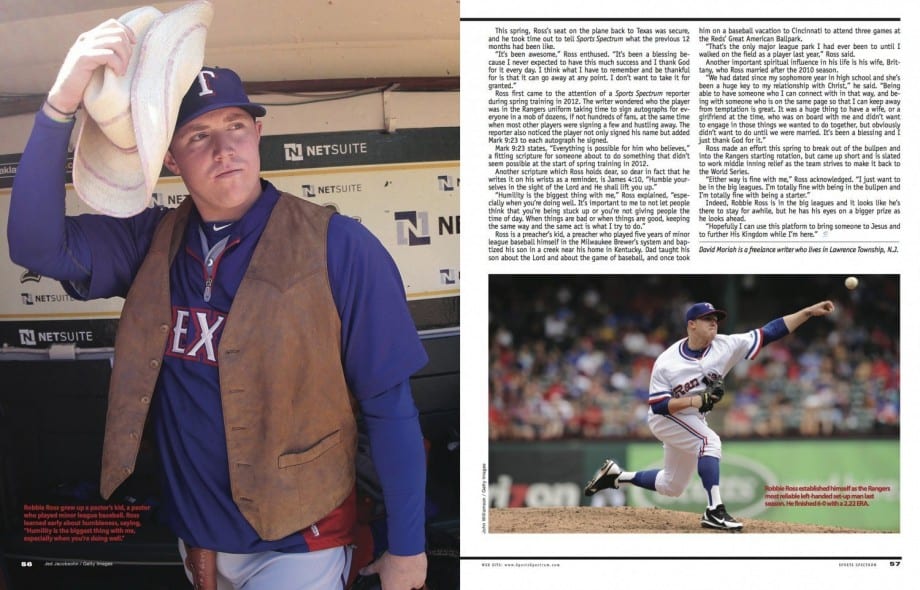 Mark 9:23 states, “Everything is possible for him who believes,” a fitting scripture for someone about to do something that didn’t seem possible at the start of spring training in 2012.

Another scripture which Ross holds dear, so dear in fact that he writes it on his wrists as a reminder, is James 4:10, “Humble yourselves in the sight of the Lord and He shall lift you up.”

“Humility is the biggest thing with me,” Ross explained, “especially when you’re doing well. It’s important to me to not let people think that you’re being stuck up or you’re not giving people the time of day. When things are bad or when things are good, keeping the same way and the same act is what I try to do.”

Ross is a preacher’s kid, a preacher who played five years of minor league baseball himself in the Milwaukee Brewer’s system and baptized his son in a creek near his home in Kentucky. Dad taught his son about the Lord and about the game of baseball, and once took him on a baseball vacation to Cincinnati to attend three games at the Reds’ Great American Ballpark.

“That’s the only major league park I had ever been to until I walked on the field as a player last year,” Ross said.

Another important spiritual influence in his life is his wife, Brittany, who Ross married after the 2010 season.

“We had dated since my sophomore year in high school and she’s been a huge key to my relationship with Christ,” he said. “Being able to have someone who I can connect with in that way, and being with someone who is on the same page so that I can keep away from temptation is great. It was a huge thing to have a wife, or a girlfriend at the time, who was on board with me and didn’t want to engage in those things we wanted to do together, but obviously didn’t want to do until we were married. It’s been a blessing and I just thank God for it.”

Ross made an effort this spring to break out of the bullpen and into the Rangers starting rotation, but came up short and is slated to work middle inning relief as the team strives to make it back to the World Series.

Indeed, Robbie Ross is in the big leagues and it looks like he’s there to stay for awhile, but he has his eyes on a bigger prize as he looks ahead.

“Hopefully I can use this platform to bring someone to Jesus and to further His Kingdom while I’m here.”