Hurdling The Obstacles of Life 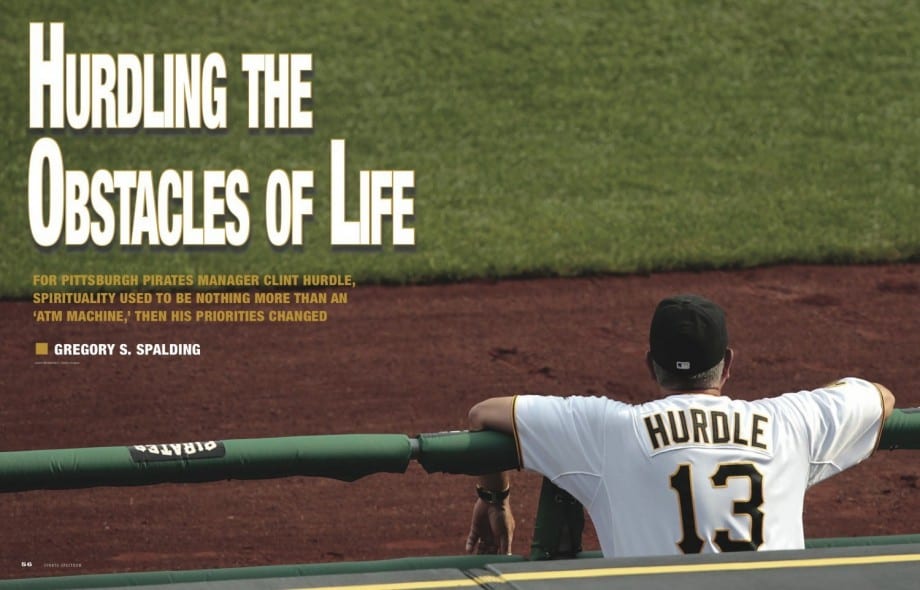 Pittsburgh Pirates manager Clint Hurdle exudes honesty and transparency and sets a high standard for himself on and off the field.

That’s not lost on his players, who he expects to live up to a high standard, as well.

“Every player is responsible and accountable to represent the name on the front (Pittsburgh) more than on the back,” says Hurdle, who has led the Pirates to two of their best first-half starts since winning the National League East in 1992. “Don’t take that for granted.”

To inspire others, he regularly reads the writings of Christian leaders such as Chuck Swindoll and Rick Warren and challenges men with Romans 14:12, “So each of us is accountable to God.”

Hurdle challenges all men to get over their specific hurdles that keep them from having a servant’s heart.

But, Hurdle hasn’t always been so strong in his faith. There was a time where he was living a convenient type of Christianity.

Recently, when he spoke at a men’s dinner, he declared, “I’m being real transparent with you…My Christian walk is not a walk but an obstacle course.”

For many years, Clint admits that he got in his own way, his primary obstacle.

“I stand before you as a flawed human being. I accepted Christ at the age of 17. I’ve been married three times.”

Faith as a Convenience

Clint had everything going for him as a teenager.

Kansas City thought so much of him that the Royals selected him with the ninth pick of the 1975 Major League Baseball draft. He made his major league debut on Sept. 18, 1977, with the Royals and hit .308 in limited action getting eight hits and in 26 at bats.

As a result of his potential, Sports Illustrated featured Hurdle on its March 20, 1978, cover with the headline, “This Year’s Phenom.”

Unfortunately, he never reached the lofty status that his draft position promised, playing regularly only in 1978 and 1980, hitting .264 and .294, respectively.

Thinking back, Hurdle feels that God made him a mediocre player so that he could make a difference later as a manager.

The Royals traded Hurdle to the Reds after the 1980 season. He then was picked off waivers by the Mets and the Cardinals, before finishing his career with the Mets.

But he lost his way spiritually, which included a struggle with alcoholism.

“I used Jesus like an ATM machine for 23 years,” he says. “My faith was more comfort and convenience instead of courage and conviction. I had problems with alcohol. I have my 14-year sobriety ring here. For too many years, I didn’t stand for anything.” 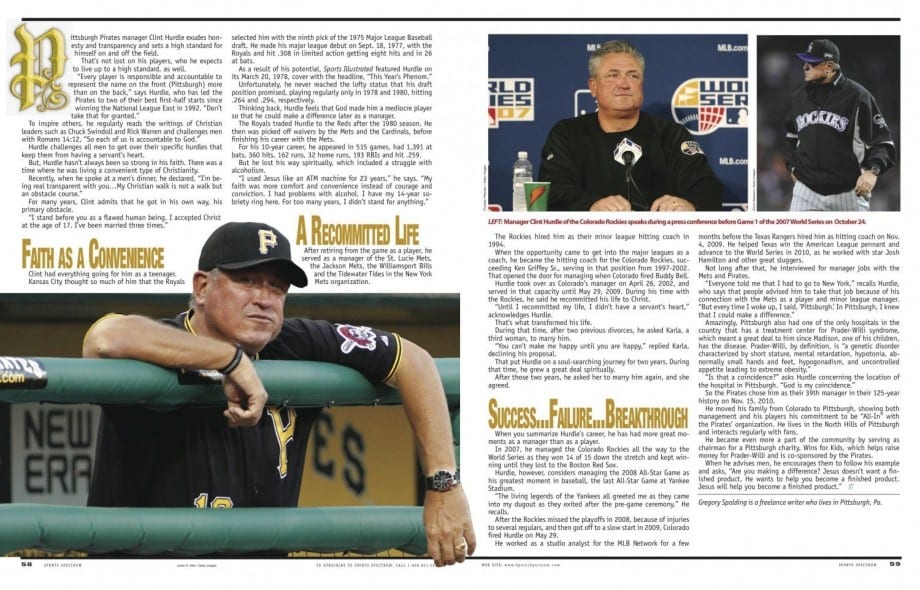 After retiring from the game as a player, he served as a manager of the St. Lucie Mets, the Jackson Mets, the Williamsport Bills and the Tidewater Tides in the New York Mets organization.

The Rockies hired him as their minor league hitting coach in 1994.

When the opportunity came to get into the major leagues as a coach, he became the hitting coach for the Colorado Rockies, succeeding Ken Griffey Sr., serving in that position from 1997-2002. That opened the door for managing when Colorado fired Buddy Bell.

Hurdle took over as Colorado’s manager on April 26, 2002, and served in that capacity until May 29, 2009. During his time with the Rockies, he said he recommitted his life to Christ.

“Until I recommitted my life, I didn’t have a servant’s heart,” acknowledges Hurdle.

That’s what transformed his life.

During that time, after two previous divorces, he asked Karla, a third woman, to marry him.

“You can’t make me happy until you are happy,” replied Karla, declining his proposal.

That put Hurdle on a soul-searching journey for two years. During that time, he grew a great deal spiritually.

After those two years, he asked her to marry him again, and she agreed.

When you summarize Hurdle’s career, he has had more great moments as a manager than as a player.

In 2007, he managed the Colorado Rockies all the way to the World Series as they won 14 of 15 down the stretch and kept winning until they lost to the Boston Red Sox.

“The living legends of the Yankees all greeted me as they came into my dugout as they exited after the pre-game ceremony.” He recalls.

After the Rockies missed the playoffs in 2008, because of injuries to several regulars, and then got off to a slow start in 2009, Colorado fired Hurdle on May 29.

He worked as a studio analyst for the MLB Network for a few months before the Texas Rangers hired him as hitting coach on Nov. 4, 2009. He helped Texas win the American League pennant and advance to the World Series in 2010, as he worked with star Josh Hamilton and other great sluggers.

Not long after that, he interviewed for manager jobs with the Mets and Pirates.

“Everyone told me that I had to go to New York,” recalls Hurdle, who says that people advised him to take that job because of his connection with the Mets as a player and minor league manager. “But every time I woke up, I said, ‘Pittsburgh.’ In Pittsburgh, I knew that I could make a difference.”

Amazingly, Pittsburgh also had one of the only hospitals in the country that has a treatment center for Prader-Willi syndrome, which meant a great deal to him since Madison, one of his children, has the disease. Prader-Willi, by definition, is “a genetic disorder characterized by short stature, mental retardation, hypotonia, abnormally small hands and feet, hypogonadism, and uncontrolled appetite leading to extreme obesity.”

“Is that a coincidence?” asks Hurdle concerning the location of the hospital in Pittsburgh. “God is my coincidence.”

He moved his family from Colorado to Pittsburgh, showing both management and his players his commitment to be “All-In” with the Pirates’ organization. He lives in the North Hills of Pittsburgh and interacts regularly with fans.

He became even more a part of the community by serving as chairman for a Pittsburgh charity, Wins for Kids, which helps raise money for Prader-Willi and is co-sponsored by the Pirates.

Gregory Spalding is a freelance writer who lives in Pittsburgh, Pa.