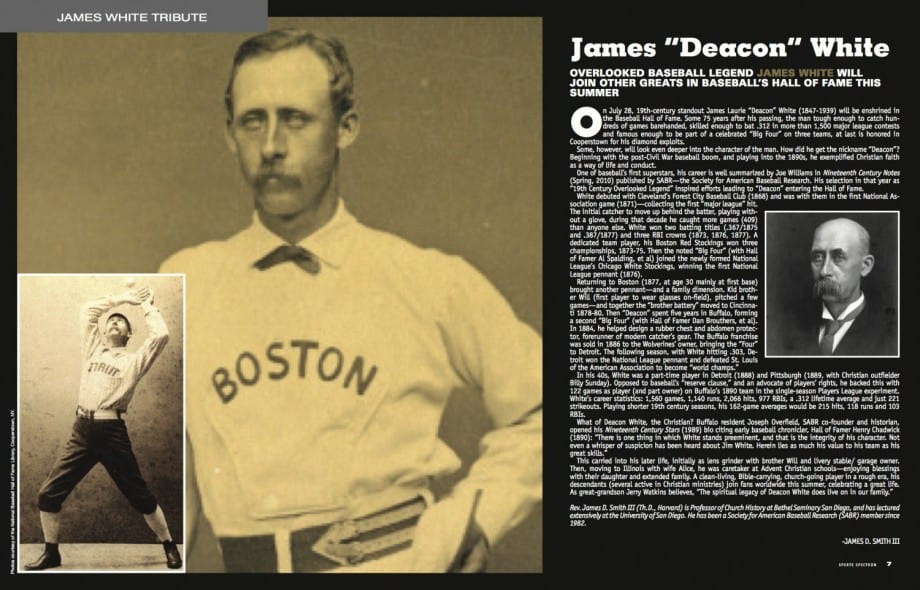 On July 28, 19th-century standout James Laurie “Deacon” White (1847-1939) will be enshrined in the Baseball Hall of Fame. Some 75 years after his passing, the man tough enough to catch hundreds of games barehanded, skilled enough to bat .312 in more than 1,500 major league contests and famous enough to be part of a celebrated “Big Four” on three teams, at last is honored in Cooperstown for his diamond exploits.

Some, however, will look even deeper into the character of the man. How did he get the nickname “Deacon”?  Beginning with the post-Civil War baseball boom, and playing into the 1890s, he exemplified Christian faith as a way of life and conduct.

One of baseball’s first superstars, his career is well summarized by Joe Williams in Nineteenth Century Notes (Spring, 2010) published by SABR—the Society for American Baseball Research. His selection in that year as “19th Century Overlooked Legend” inspired efforts leading to “Deacon” entering the Hall of Fame.

White debuted with Cleveland’s Forest City Baseball Club (1868) and was with them in the first National Association game (1871)—collecting the first “major league” hit. The initial catcher to move up behind the batter, playing without a glove, during that decade he caught more games (409) than anyone else. White won two batting titles (.367/1875 and .387/1877) and three RBI crowns (1873, 1876, 1877). A dedicated team player, his Boston Red Stockings won three championships, 1873-75. Then the noted “Big Four” (with Hall of Famer Al Spalding, et al) joined the newly formed National League’s Chicago White Stockings, winning the first National League pennant (1876).

Returning to Boston (1877, at age 30 mainly at first base) brought another pennant—and a family dimension. Kid brother Will (first player to wear glasses on-field), pitched a few games—and together the “brother battery” moved to Cincinnati 1878-80. Then “Deacon” spent five years in Buffalo, forming a second “Big Four” (with Hall of Famer Dan Brouthers, et al). In 1884, he helped design a rubber chest and abdomen protector, forerunner of modern catcher’s gear. The Buffalo franchise was sold in 1886 to the Wolverines’ owner, bringing the “Four” to Detroit. The following season, with White hitting .303, Detroit won the National League pennant and defeated St. Louis of the American Association to become “world champs.”

What of Deacon White, the Christian? Buffalo resident Joseph Overfield, SABR co-founder and historian, opened his Nineteenth Century Stars (1989) bio citing early baseball chronicler, Hall of Famer Henry Chadwick (1890): “There is one thing in which White stands preeminent, and that is the integrity of his character. Not even a whisper of suspicion has been heard about Jim White. Herein lies as much his value to his team as his great skills.”

This carried into his later life, initially as lens grinder with brother Will and livery stable/ garage owner. Then, moving to Illinois with wife Alice, he was caretaker at Advent Christian schools—enjoying blessings with their daughter and extended family. A clean-living, Bible-carrying, church-going player in a rough era, his descendants (several active in Christian ministries) join fans worldwide this summer, celebrating a great life. As great-grandson Jerry Watkins believes, “The spiritual legacy of Deacon White does live on in our family.”