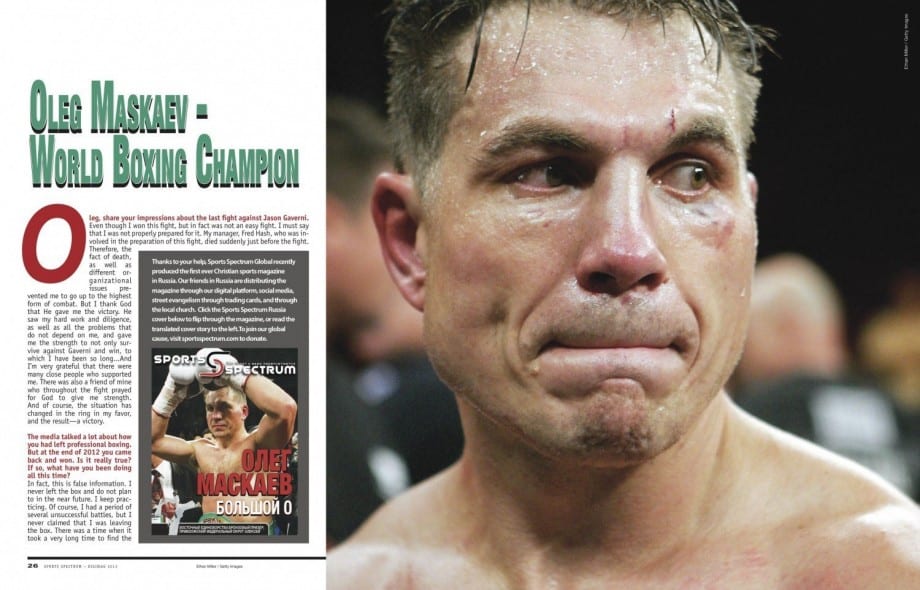 Oleg, share your impressions about the last fight against Jason Gaverni.
Even though I won this fight, but in fact was not an easy fight. I must say that I was not properly prepared for it. My manager, Fred Hash, who was involved in the preparation of this fight, died suddenly just before the fight. Therefore, the fact of death, as well as different organizational issues prevented me to go up to the highest form of combat. But I thank God that He gave me the victory. He saw my hard work and diligence, as well as all the problems that do not depend on me, and gave me the strength to not only survive against Gaverni and win, to which I have been so long…And I’m very grateful that there were many close people who supported me. There was also a friend of mine who throughout the fight prayed for God to give me strength. And of course, the situation has changed in the ring in my favor, and the result—a victory.

The media talked a lot about how you had left professional boxing. But at the end of 2012 you came back and won. Is it really true? If so, what have you been doing all this time?
In fact, this is false information. I never left the box and do not plan to in the near future. I keep practicing. Of course, I had a period of several unsuccessful battles, but I never claimed that I was leaving the box. There was a time when it took a very long time to find the right fight, and maybe this is the reason of such rumors. But I kept practicing, kept their shape and waited for opportunities to re-enter the ring.

Tell us a bit about your life and how you believed in God.
I was born in Karaganda, a city with a reputation as a hooligan (Republic of Kazakhstan). Born into a family of people far from God, where problems are solved, relying only on human strength, without God. My father once advised me: “Oleg, do boxing, you have to be healthy and strong man to protect themselves.” At that time, boxing was very developed sports in my hometown. On the advice of my father I started boxing, but never wanted to go to a professional level. I was an amateur boxer won the Championship of the Armed Forces of the USSR, the Championship of friendly armies of the Warsaw Treaty, the Cup of the Soviet Union, was the champion of Asia, and repeated, as well as a silver medal in the world championship in 1992. April 17, 1993 in the town of Jambul (Kazakhstan) I had my first professional fight. Then, still an inexperienced boxer, I spent the fight against Alexander Miroshnichenko, USSR champion, multiple European champion and Olympic medalist. To the surprise of all, I’m an aspiring boxer who knocked out a defending champion held in the third round, and after that I signed the contract in the U.S..

At 22, I began to realize that in life there is something much bigger than my battles, victories and glory. Situations occurred in my life that I could not even tell the people close to me, forcing me to seek God. Over time, my mind became fully aware that a strong boxer needs the support of the Lord. God came to meet me. I heard about Jesus Christ from my mother in law, and every time I came to visit her, I liked to read a small children’s Bible. From the pages of this book, the Holy Spirit touched my heart. I began to realize that God is out there somewhere. After a while I got to watch the film “Jesus”, organized in one of the theaters of Moscow. It is through the stories the film, set on the basis of the Gospel of Luke, I realized how much Jesus had done for me. That night in prayer to Jesus, I asked forgiveness for their sins and ask for support for each day.

On that day, everything changed. God and I began to move together towards the accomplishment of spiritual victories. The Lord sustained me through the most difficult and dangerous periods of life. It is a step by step, stage by stage strengthened me as a future world champion, helping me to grow spiritually. The obvious result of a living relationship with God are the blessings of God, namely, success in my boxing career. After a series of landslide victory in the summer of 2004, I stepped into the ring against the silver medalist in 1996 (Atlanta) Defiagbona David, who had no injuries before that time. I confidently won on points.

Despite these victories, for me the main thing was that I was walking down a new path, the path of knowledge word of truth. All this strengthened me and helped start the witness of faith in Jesus. One example: my father, a staunch atheist who always spoke and taught us that we have to rely only on ourselves, on our own strength, our health and our courage. After I shared with him by his faith in God, he said to me: “Oleg, you got up on the wrong path. Believers are weak people. “ He was present at my December fight in Moscow in 2007 and witnessed his son defeat Peter Ohello and win the world title. For my father it was proof that Christians  that have a right relationship with our Savior Christ can be strong, not only by faith and spirit, but also physically.

Why is the Bible such an important book to you and your family?
When we buy something, almost every thing has instructions attached for use. It teaches on the one hand and on the other—cautions. God wrote the Bible for a person, as an instruction to his life. In it we find the essential truths of life and relationships both with God and with people. But other than that, the Bible—the Word of God Himself to man, which gives us hope and leads to faith in Him and eternal life.

After completion of your boxing career, how will you use your experience of the Christian life, as well as their athletic experience and achievements?
Frankly, I live for today. And when I box, I try to achieve maximum results. For each athlete, it is hard to think about retirement. But I know that no matter how developed my future life, God always gives me hope through faith in Jesus Christ. Of course, we do some business, and our success depends on who we glorify with our own affairs—ourselves or God, who gives us all. Of course, I’d like to fight a couple more fights, if it be God’s will. Whatever happens, I know my God will always support and be there with me, and my family is also always there and supporting me.

Tell us how your family supports you in the process of training and matches.
For me, their support is very important. My family, it’s only women, but they are known to always love, regret and worry. Constant running, self-training, sparring partners, etc., and all this I always feel their care and support.

What have you learned about winning and losing?
As an athlete, I do not like lessons, because it is always difficult. The first thing I ask myself the question: Why did this happen? Often defeat says that I made a lot of mistakes that I need to work on in the future. And this applies not only to sports injuries, but also the circumstances of life. So for me, defeat provides an incentive to work on my mistakes.

About victories, I will say that this is not just my victory. This is the victory of my family, my friends and my church. Because we are all very pleased about this. Victory—they are always pleasant. But all these wins and losses—it’s just a way of testing and purification, which I’m going with God. The biggest victory yet to come—a meeting with my Lord.

Your wishes to the readers…
The most important thing that you can believe is God, that you understand His importance in your life. And, of course, that when you believe in Him, your business always agrees with your faith. For myself I know that we often talk a lot, but the most important thing is that we’re not just saying the right things, but that we live righteously.

This story was published in Sports Spectrum Russia 2013, the country’s first ever Christian sports magazine.