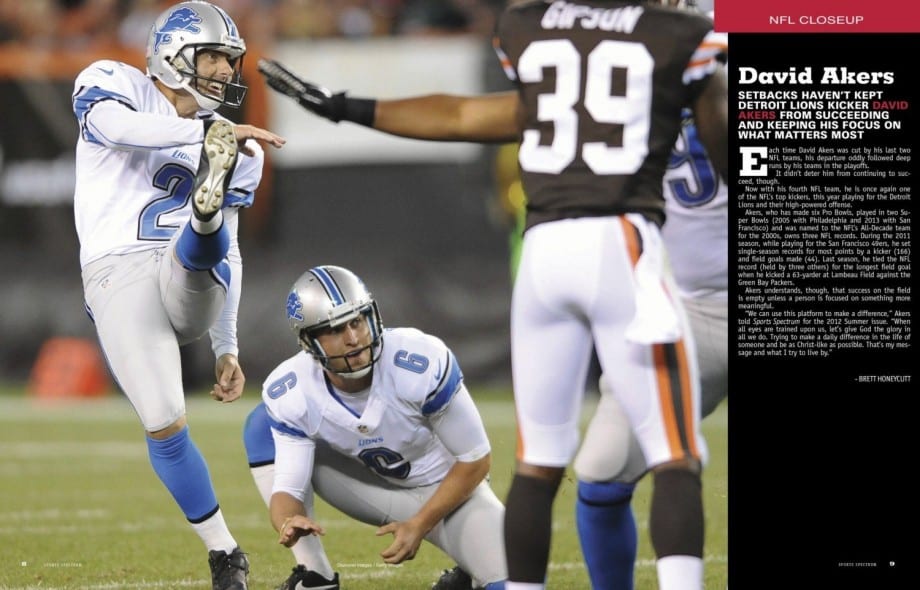 Each time David Akers was cut by his last two NFL teams, his departure oddly followed deep runs by his teams in the playoffs.

It didn’t deter him from continuing to succeed, though.

Now with his fourth NFL team, he is once again one of the NFL’s top kickers, this year playing for the Detroit Lions and their high-powered offense.

Akers, who has made six Pro Bowls, played in two Super Bowls (2005 with Philadelphia and 2013 with San Francisco) and was named to the NFL’s All-Decade team for the 2000s, owns three NFL records. During the 2011 season, while playing for the San Francisco 49ers, he set single-season records for most points by a kicker (166) and field goals made (44). Last season, he tied the NFL record (held by three others) for the longest field goal when he kicked a 63-yarder at Lambeau Field against the Green Bay Packers.

Akers understands, though, that success on the field is empty unless a person is focused on something more meaningful.

“We can use this platform to make a difference,” Akers told Sports Spectrum for the 2012 Summer issue. “When all eyes are trained upon us, let’s give God the glory in all we do. Trying to make a daily difference in the life of someone and be as Christ-like as possible. That’s my message and what I try to live by.”